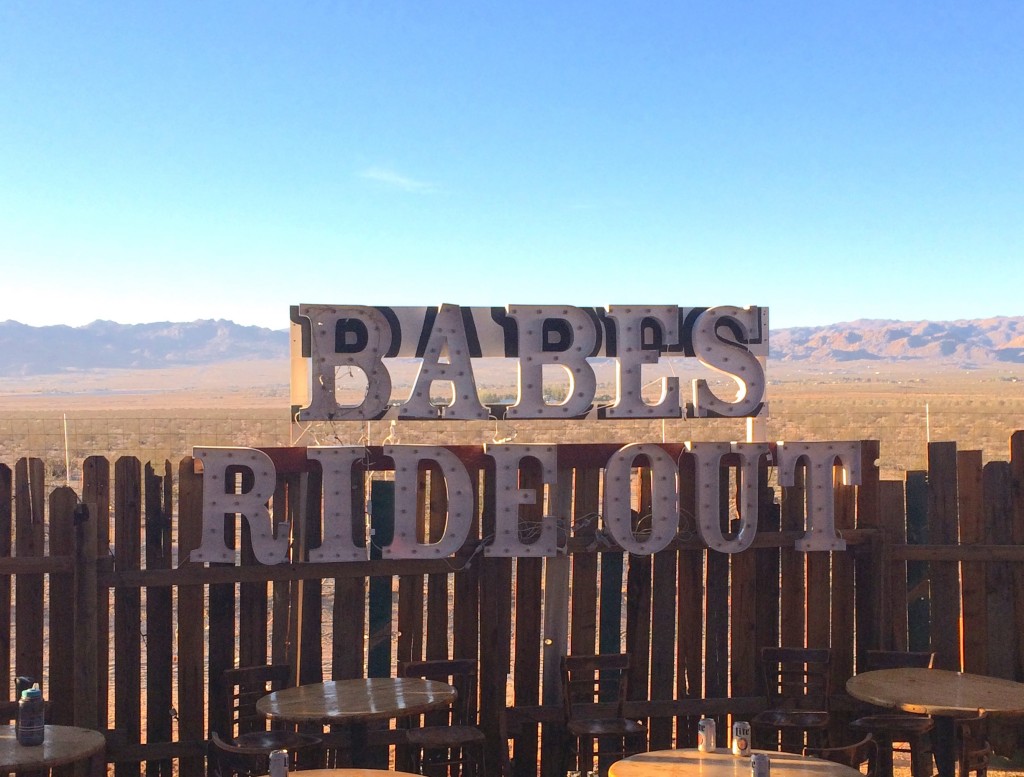 It seems like no matter where you look these days, there are amazing women on motorcycles doing inspiring things.

You’ve got The Litas, a women’s moto group that’s exploded in the past few months ⎯ at my latest count it’s FORTY chapters across SEVEN countries!

Then there’s Moto FAM, a female-founded nonprofit that helps injured riders and educates riders and drivers about road safety. Those ladies have my utmost respect.

And who can forget all the awesome artists and makers? There are so many I could go on for days, but I particularly want to call out the ones making good-looking, quality and SAFE gear for women, like Strange Vacation and Black Arrow Label. Mad props, ladies. Let me know if you need any gear reviews, yeah? 😉

Without a doubt, 2015 is the year of the modern female motorcyclist. And that’s why I knew I had to make this year’s Babes Ride Out, which promised to be a mecca of women’s motorcycling culture and could quite possibly go down in history as a Woodstock moment.

Either way, Babes Ride Out definitely delivered. First of all, the event space was absolutely incredible. It was held at Joshua Tree Lake RV and Campground (yes, there is a lake!), in a little Burning Man-esque village created for the Joshua Tree Music Festival. 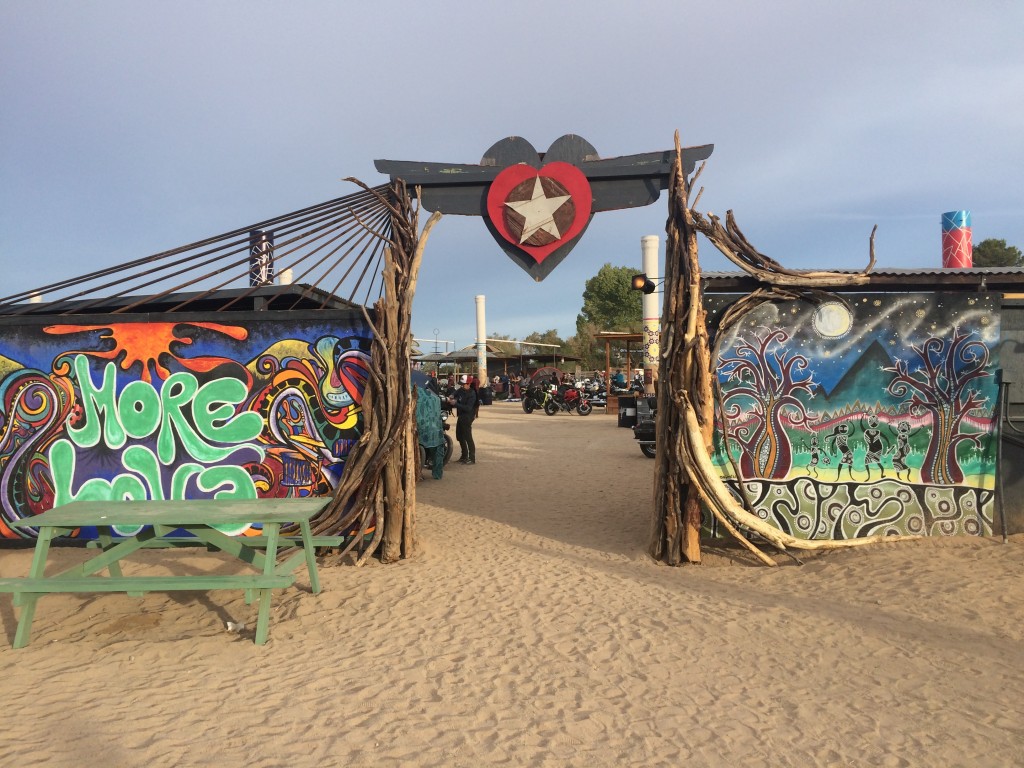 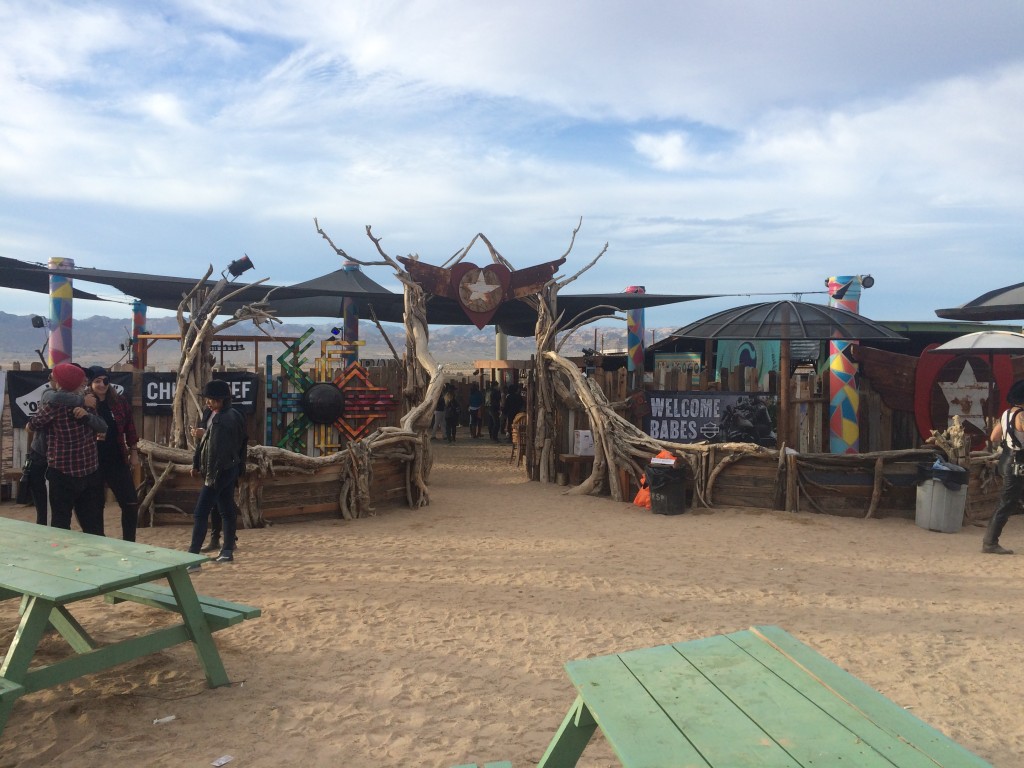 And yeah, there might have been 1,200 people there, but you really didn’t feel it (unless you were waiting in line for food!). It felt like a small town, a commune of nomadic female riders. 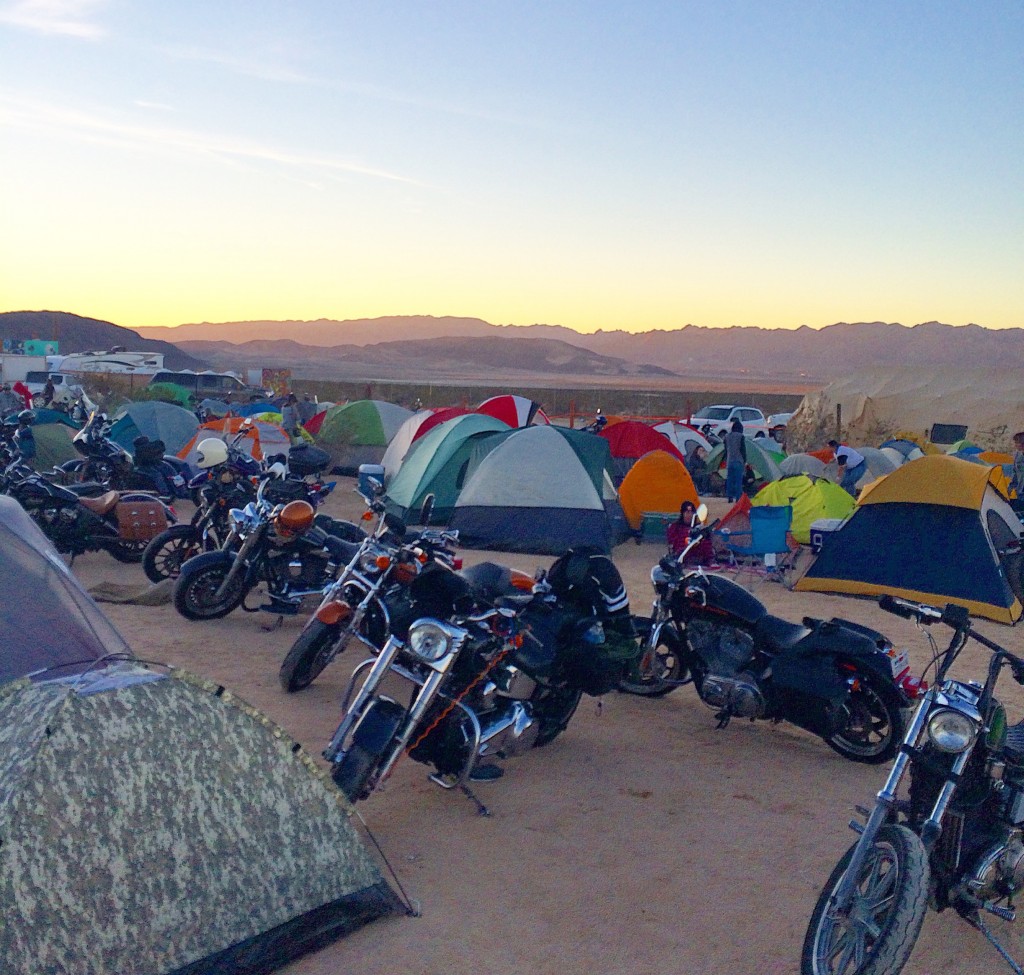 I kind of never wanted to leave. <3

And I have to say, despite the crowd, Madhouse Pies did an amazing job feeding our hungry faces. I actually had to wait in line twice to get a grilled cheese Friday night, but when I tasted it, all my frustration melted into delicious goat cheese-arugula-fig bliss. Yeah, that’s how babes eat at camp.

Now, my own personal Babes Ride Out experience was tainted by the fact that EagleRider, a rental company that had offered a BRO discount, had OVERBOOKED all of their small bikes. So, when I got to the rental place expecting to ride off on a Sporty, or a Bonneville, I was saddled with THIS: 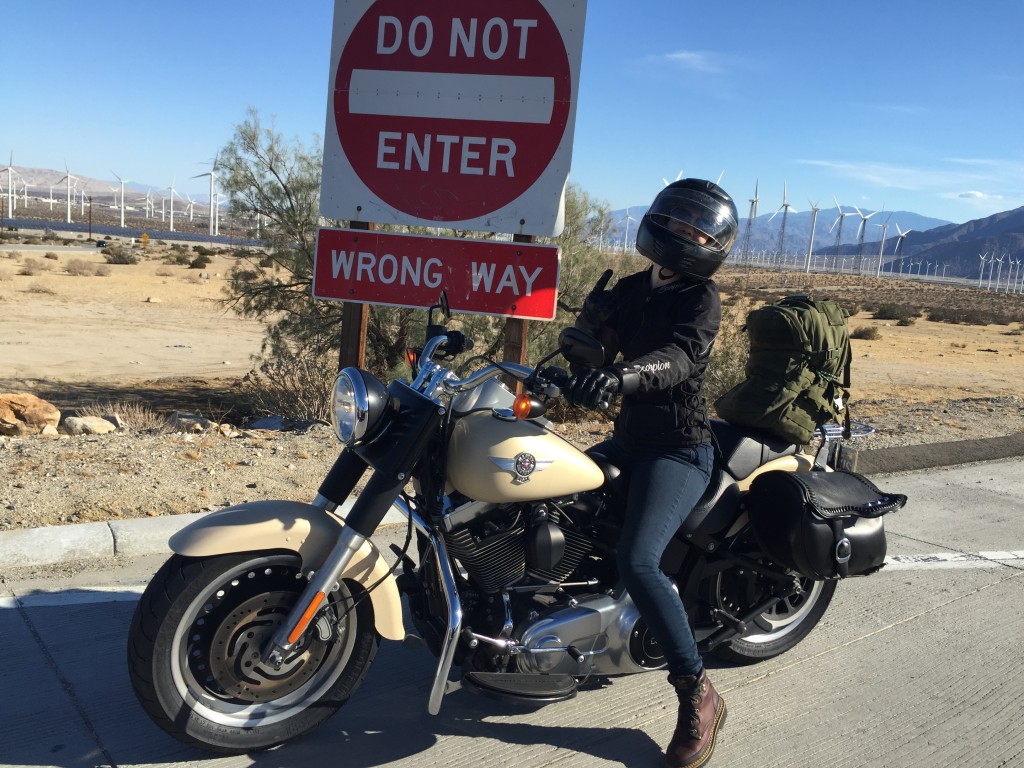 That, ladies and gents, is a Harley Fat Boy 931, complete with a passenger set, saddlebags and shift assist (which NOBODY TOLD ME ABOUT!). It’s by far the biggest bike I’ve ever ridden. And it was definitely a little terrifying, especially when it started shifting gears WITHOUT ANY INPUT FROM ME.

I’m sorry, but I paid too much money for this trip to get stuck riding some rolling sofa. And they didn’t even offer a discount. They kept telling me (and the other twenty or so girls who had their dreams crushed) that we should be happy because we’re getting an UPGRADE.

Uhhhh a Fat Boy isn’t an upgrade when you weigh 120 pounds. It’s a DEATH WISH. 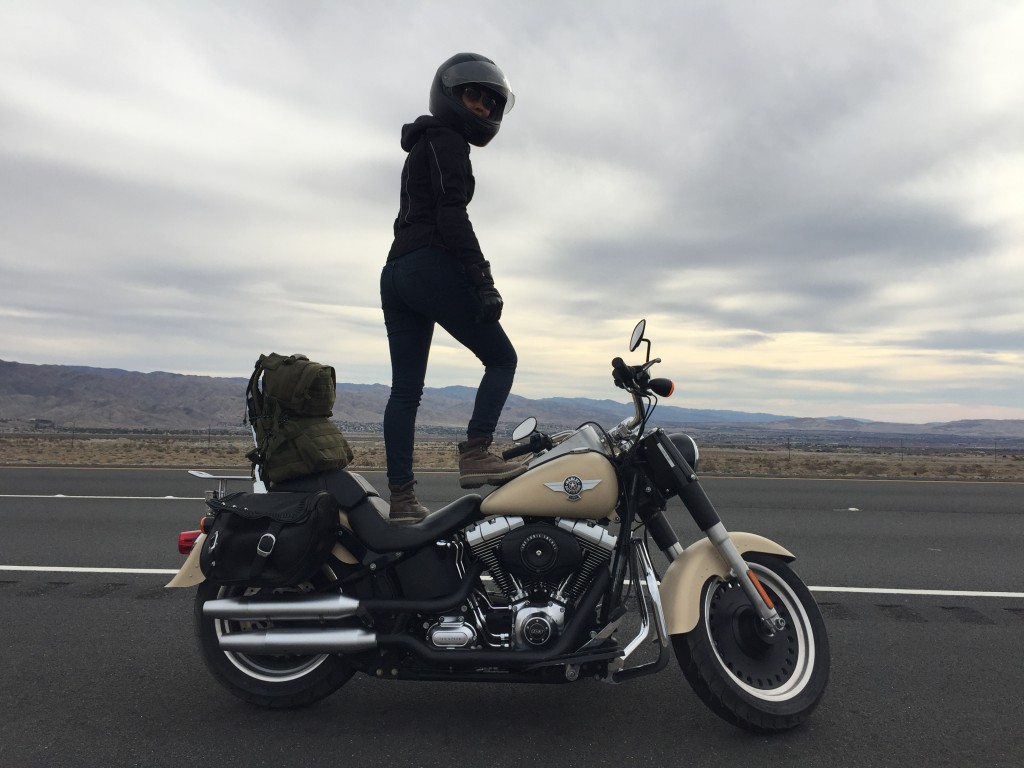 Oh well. I survived. And I might say I did so grandly: I had my first lane-splitting experience(s), and survived getting steamrolled by a biker gang (who got themselves in an accident not 15 minutes later).

Lane splitting, while not as terrifying as I imagined, is definitely not something I’m going to try at home. I mean, the California drivers actually moved over when they saw bikes coming! Texas drivers would also move over… right into your path.

Anyway, after the ride in on Friday and getting nearly no sleep that night (DON’T LEAVE YOUR SLEEPING MAT AT HOME. It’s necessary!), on Saturday morning I decided I needed a little me-time. I mean, there was no way I felt up to keeping up with a group on that Fat Boy, not on those desert twisties, nuh-uh.

So, I headed to the Joshua Tree Coffee Co, an adorable little hideaway off Twentynine Palms Highway, hidden behind a yoga studio. Miraculously, nobody else from the event had found it, so I had the shady patio (and the electrical outlet!!) nearly all to myself. 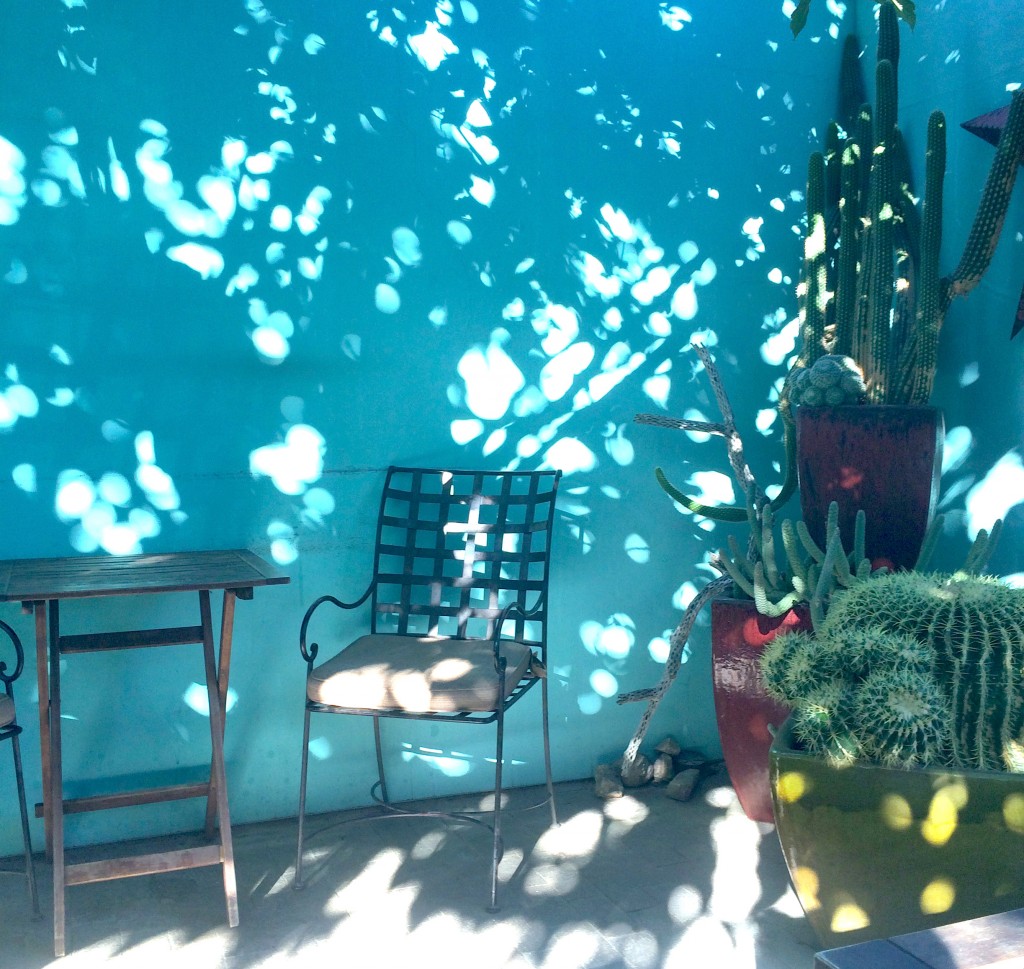 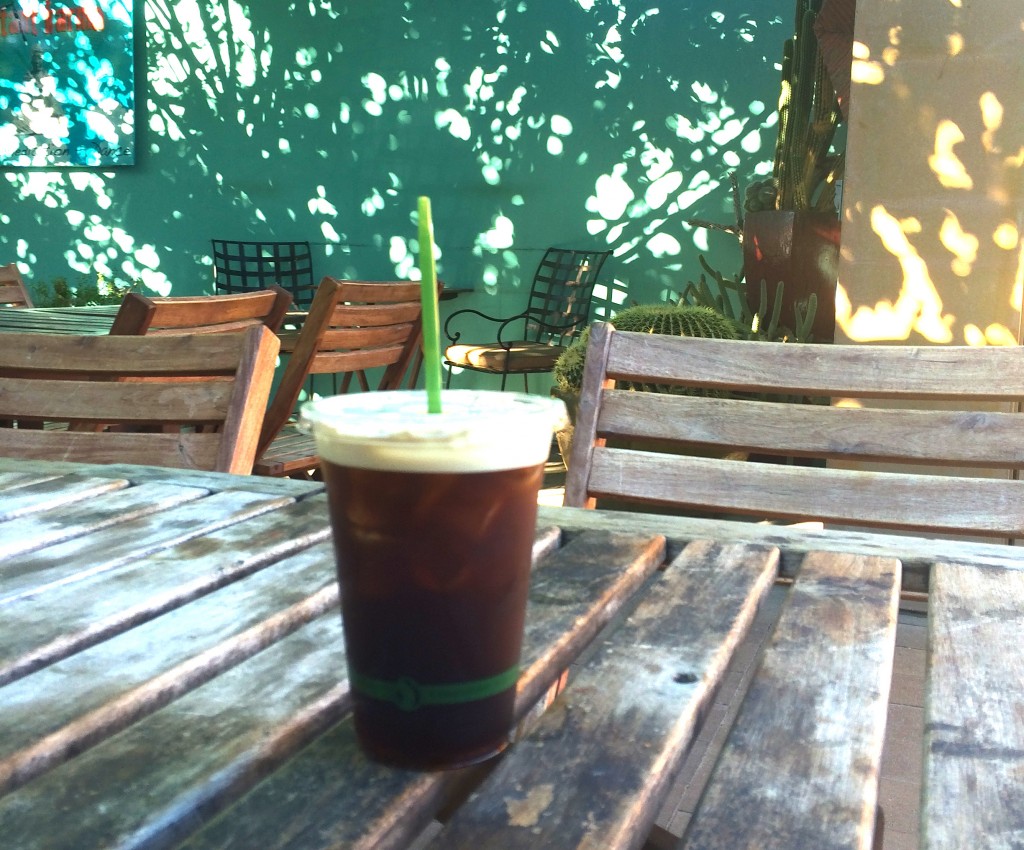 As I treated myself to a nitrogenated coffee (I’d never had one before! So creamy and delicious), and waited for my phone to charge, I decided that what I needed was a good book. Luckily, Raven’s Book Shoppe was just down the road. 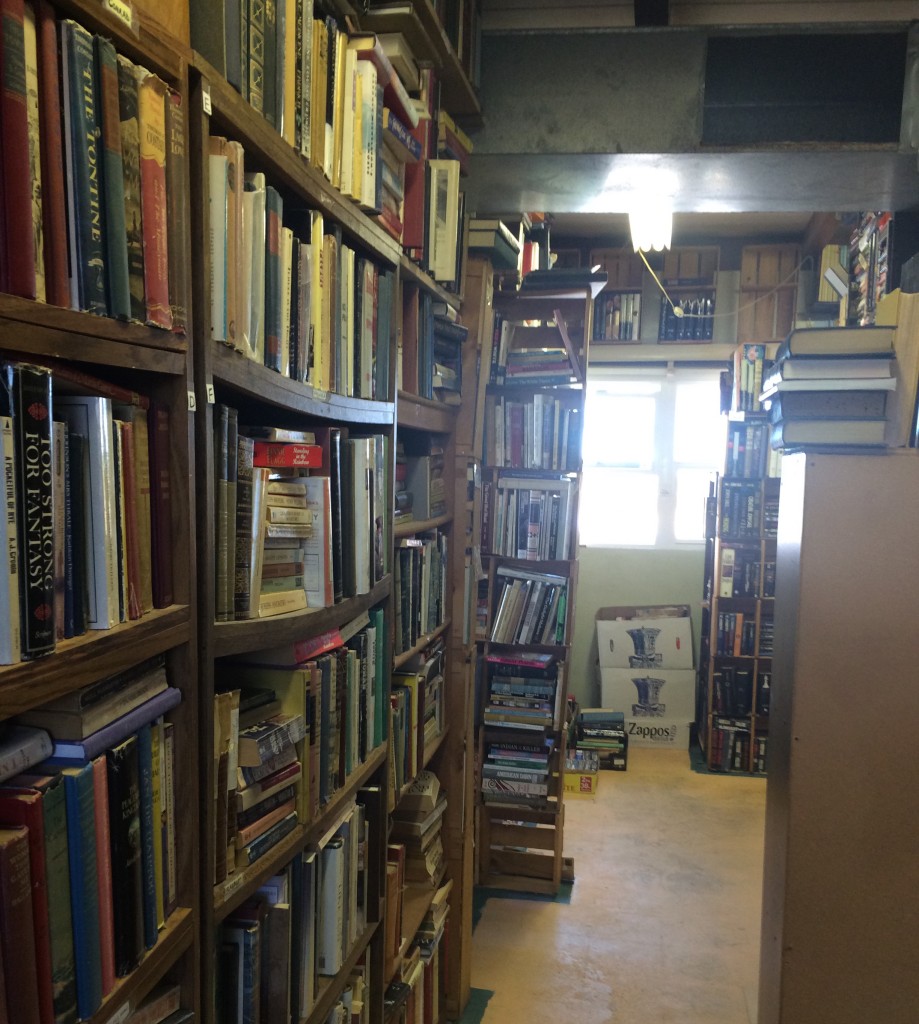 Yes, I realize that I’m probably the only person from the event that went BOOK SHOPPING that weekend… but going to small local bookshops is just kind of a thing I do when I travel. Don’t judge 😉 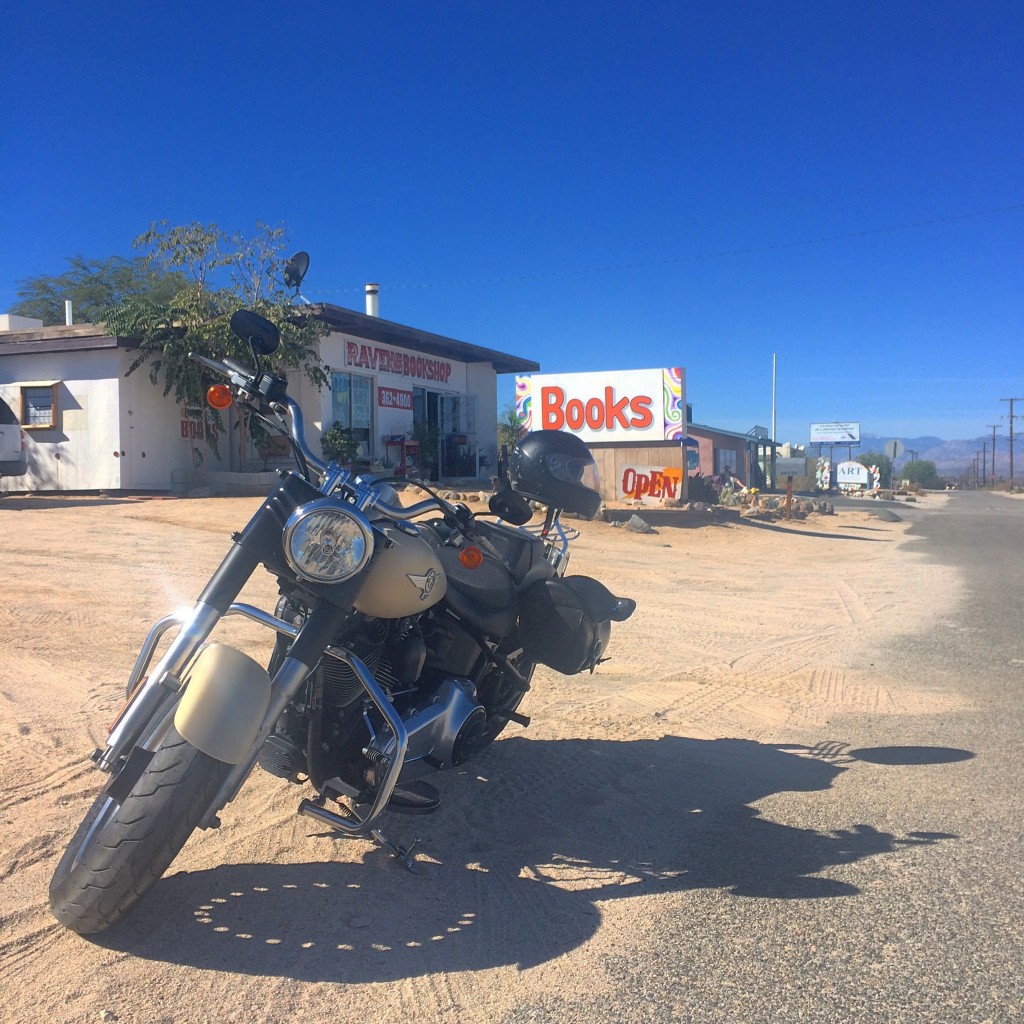 By that point it was about 11:30, not too hot with a nice breeze, so I decided to go for a cruise in the National Park until I got tired enough to head back to camp and dig into my newly acquired Douglas Adams. 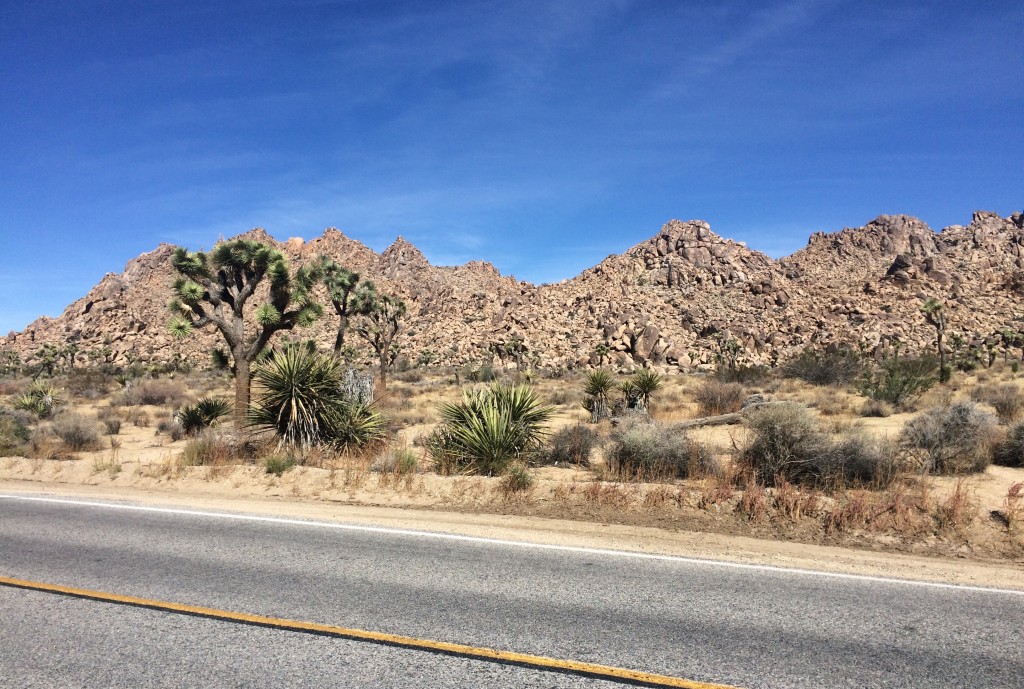 And guys? I could have stayed in that park forever. The roads were perfect for an afternoon cruise on the Fat Boy: gentle curves, 45 mph speed limit, with plenty of areas to stop and take pictures. 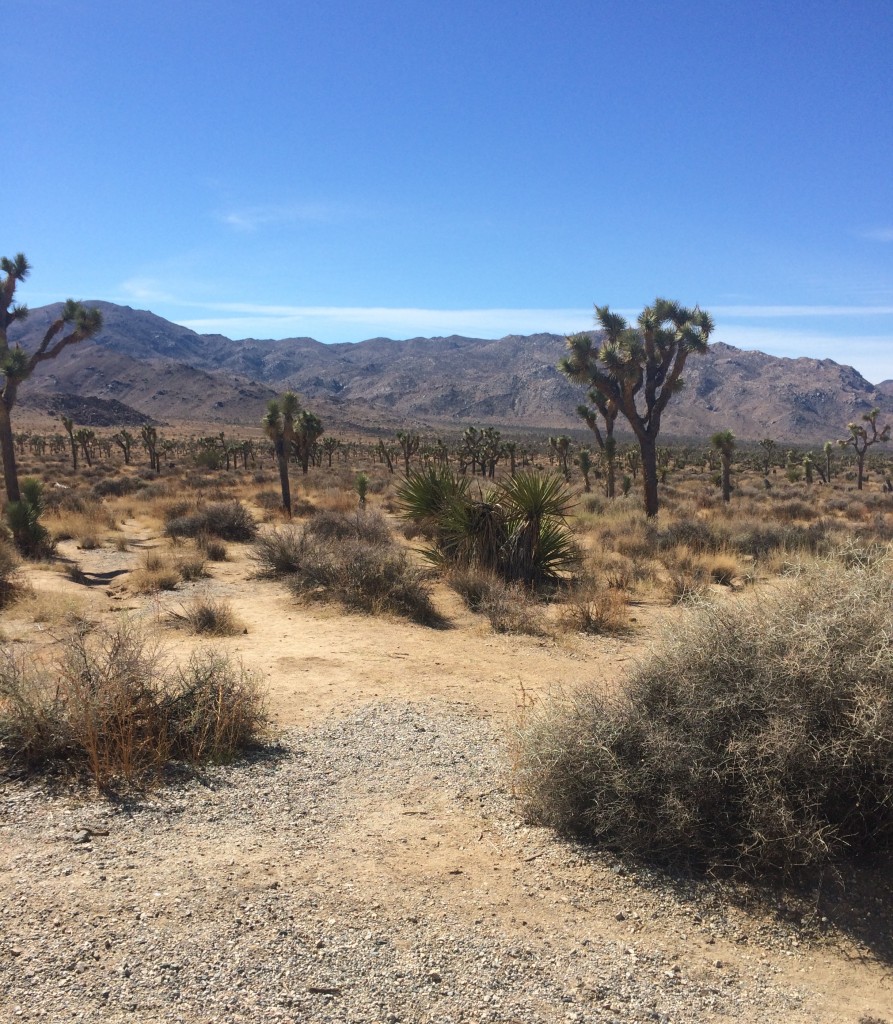 And boy, did I take pictures. 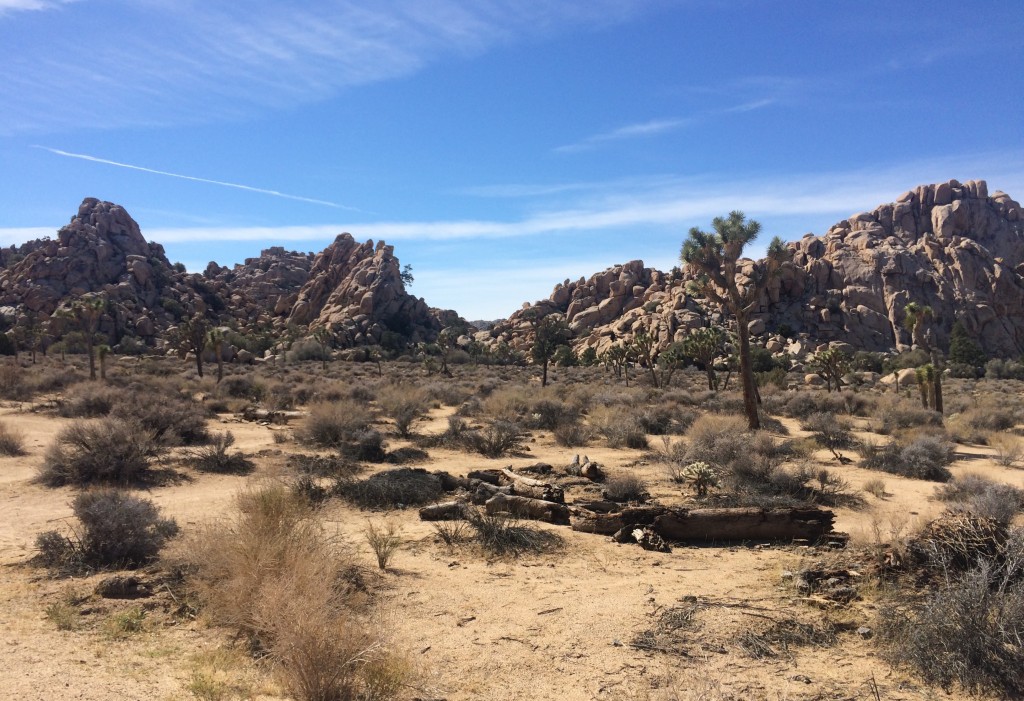 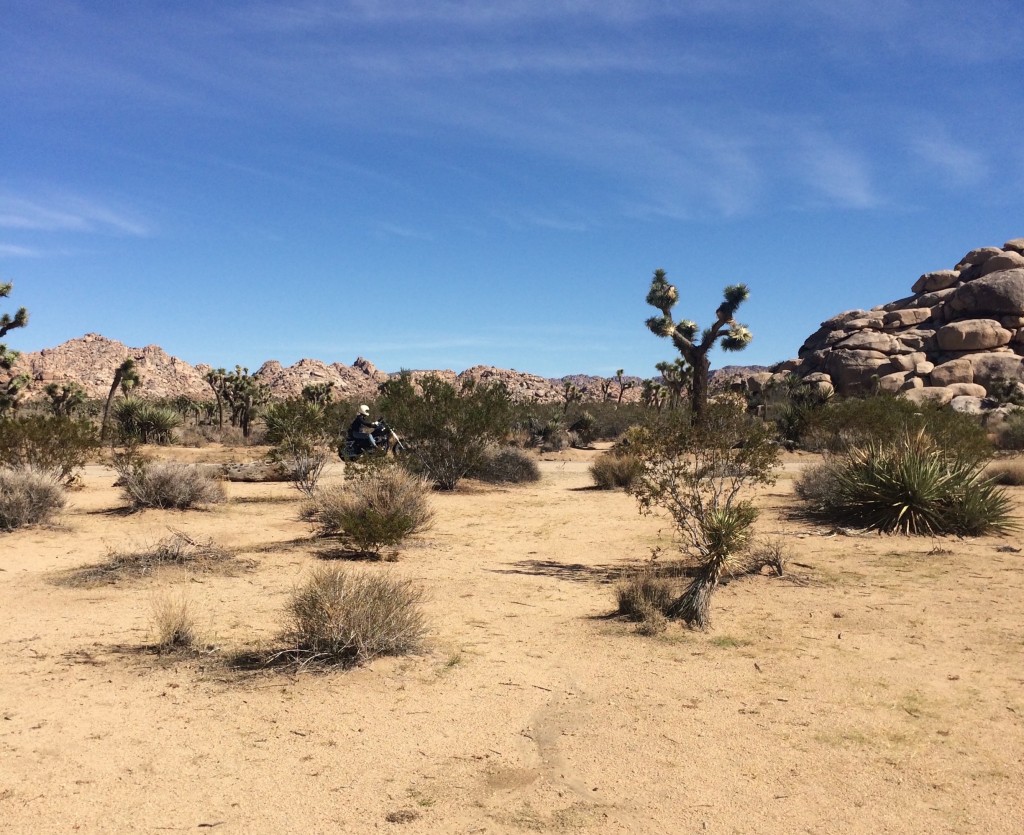 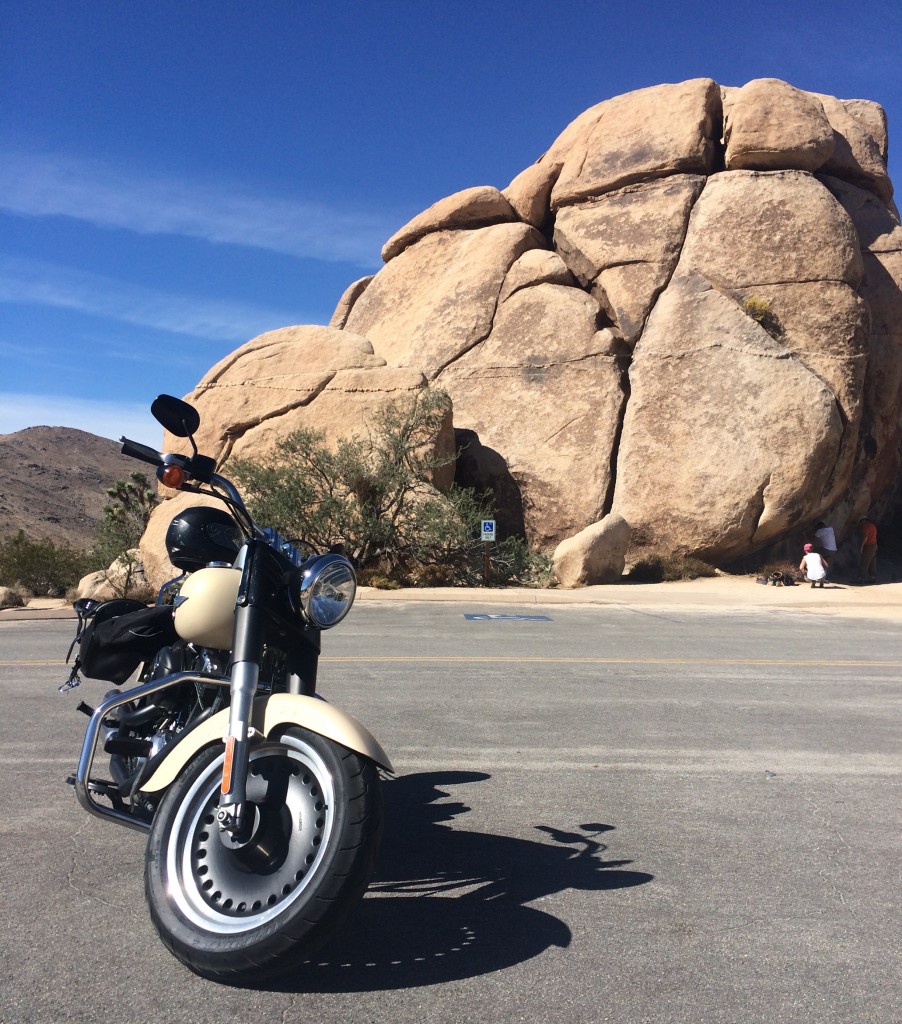 At least the Fat Boy matched the desert, right?? 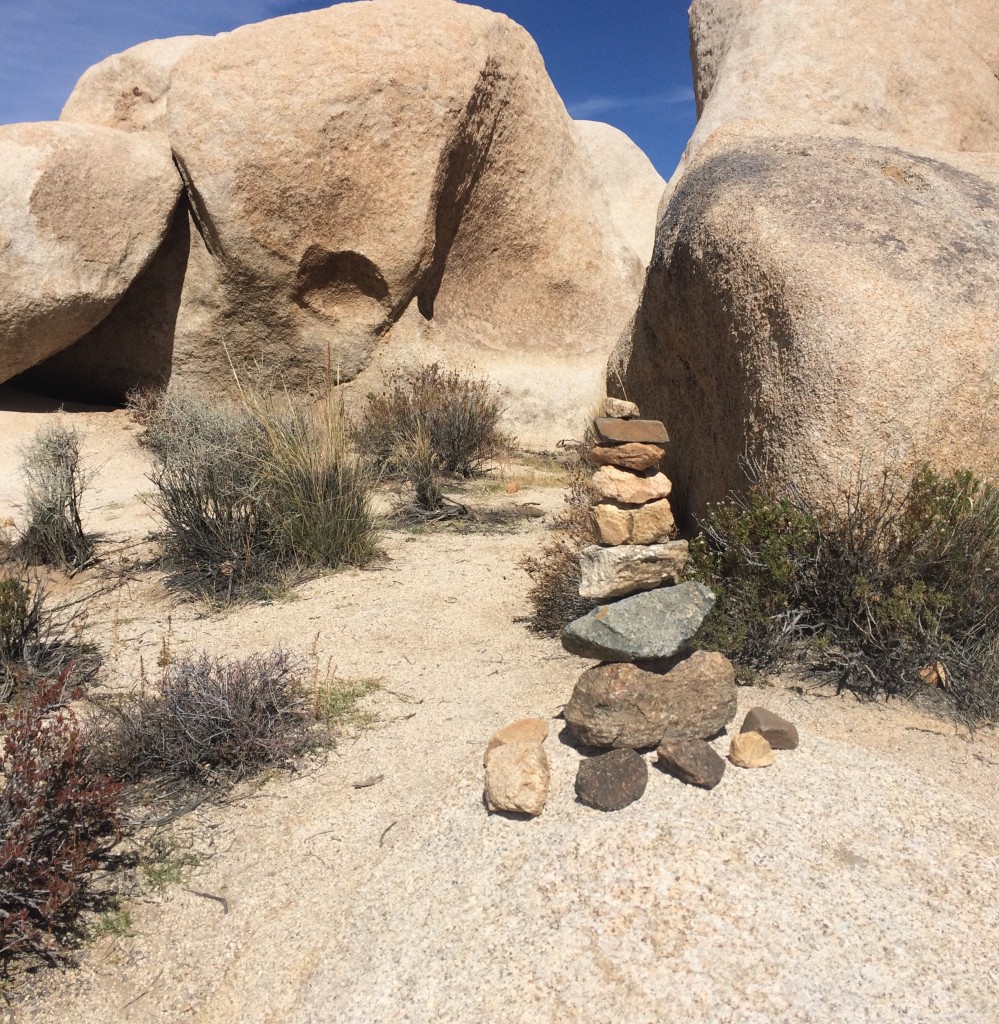 After about three hours I realized I was out of water, so I, reluctantly, headed back to camp. And maybe stopped for *just* a few more pictures 😉

The rest of the day I relaxed, got dinner, took a shower, and spent time getting to know some of the other awesome ladies who made the trip out to the desert. Before I knew it we were waking up the next morning, packing up and heading out. 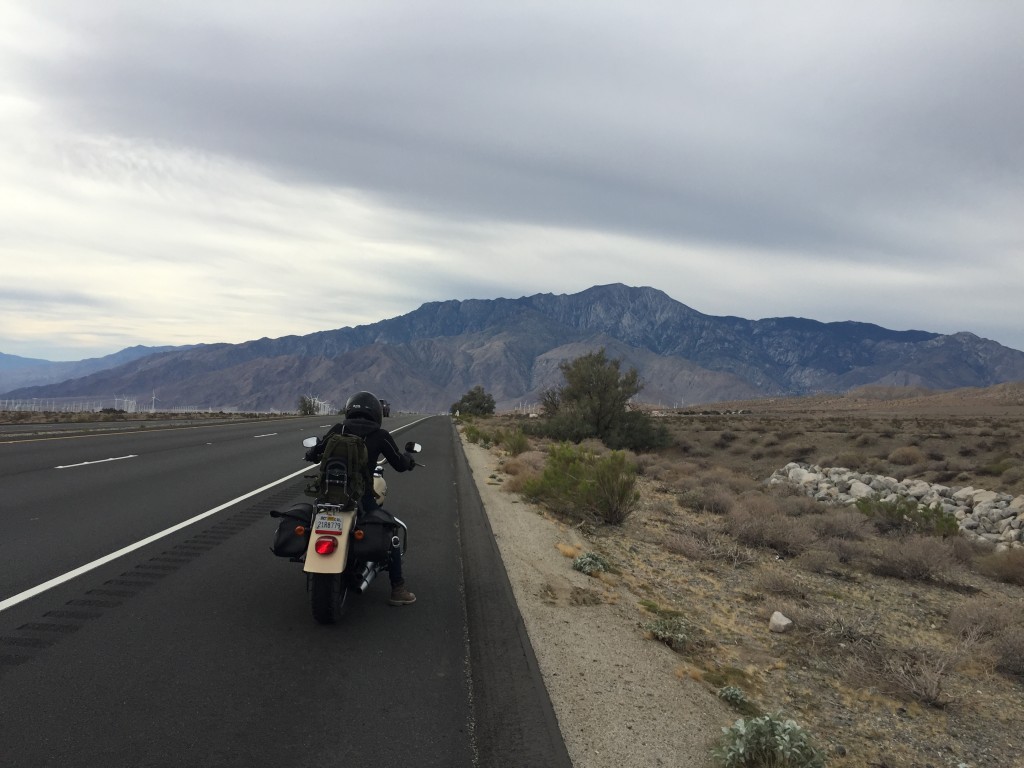 Would I go back? Yes, definitely. I met and got to spend time with so many amazing women ⎯  several minor Instagram celebrities, my very own bike builder Sofi, a woman who owns her own skate shop, another who runs local craft beer bars in Arizona… I just wish I had been a little less exhausted!

Next time, I’m bringing my OWN goddamn bike, none of this cruiser nonsense. I think the perfect setup would be a truck with a camper and a bike trailer ⎯ like hell I’m riding a show bike with dropped handlebars all the way from Texas, but oh I so want to ride it on those desert twisties 😀

BUT WAIT! This blog post would not be complete without mentioning Crystal, the motobabe who persuaded me to take a chance and fly out to LAX with her for this crazy event, who let me borrow her Forty-Eight to practice, and who encouraged me along the way. 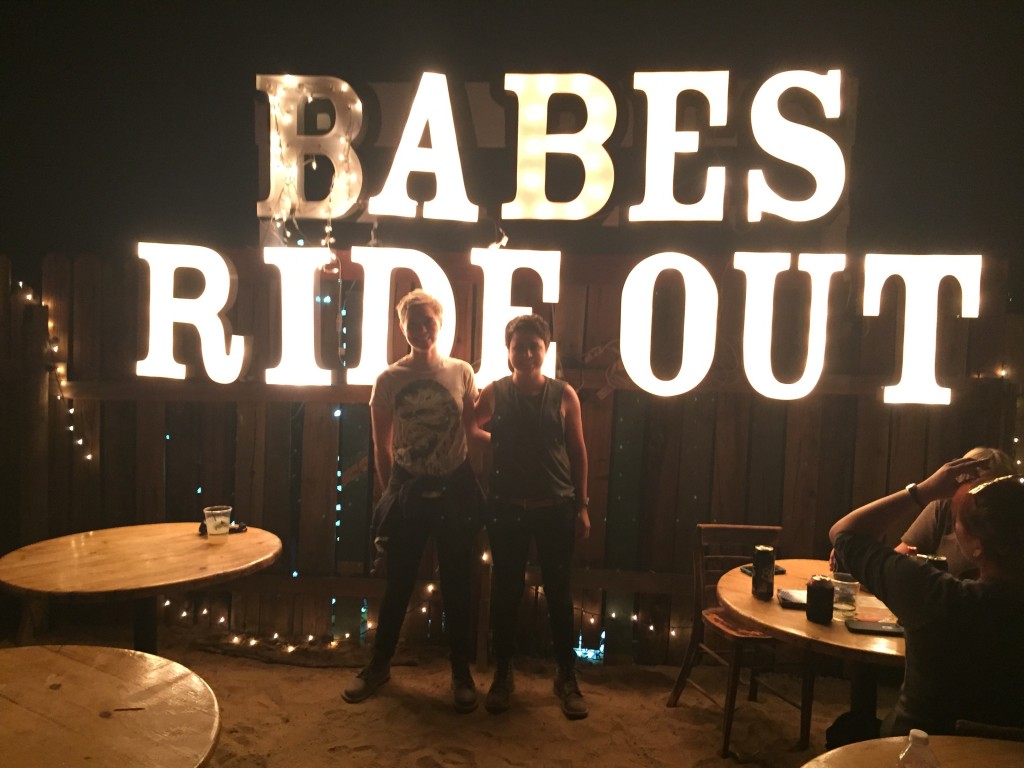 Without her I wouldn’t have even tried to experience this greatness, so thanks lady, you’re a badass 🙂 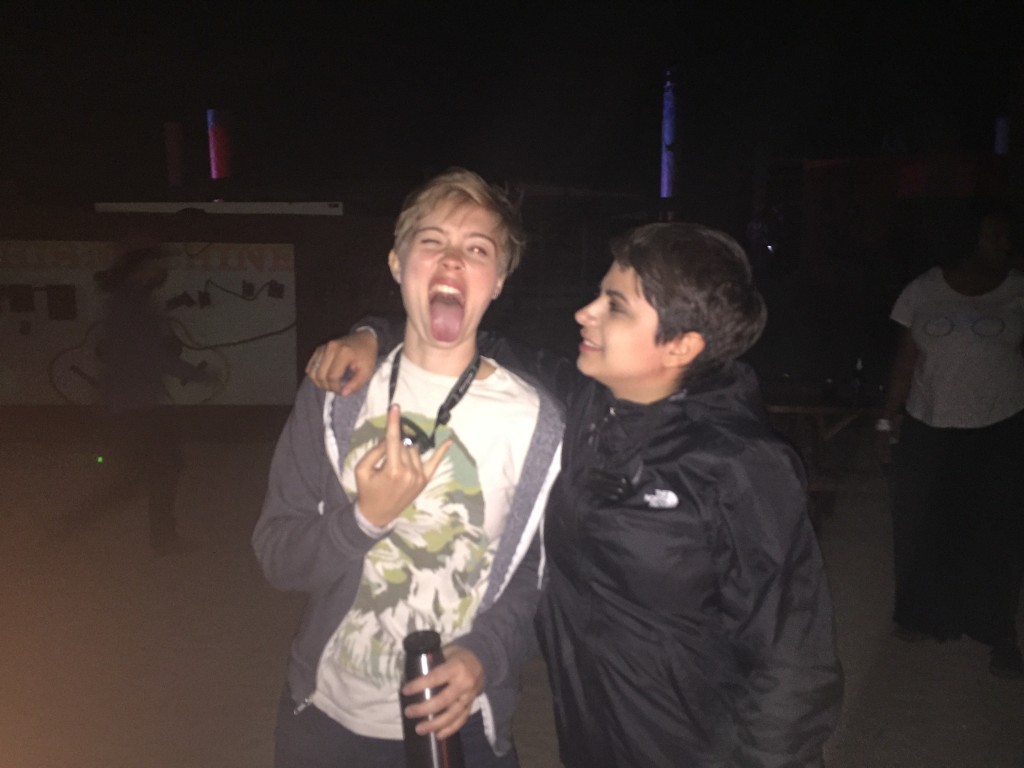 And believe it or not, I was stone-cold sober in that photo 😉

Until next year, Joshua Tree!