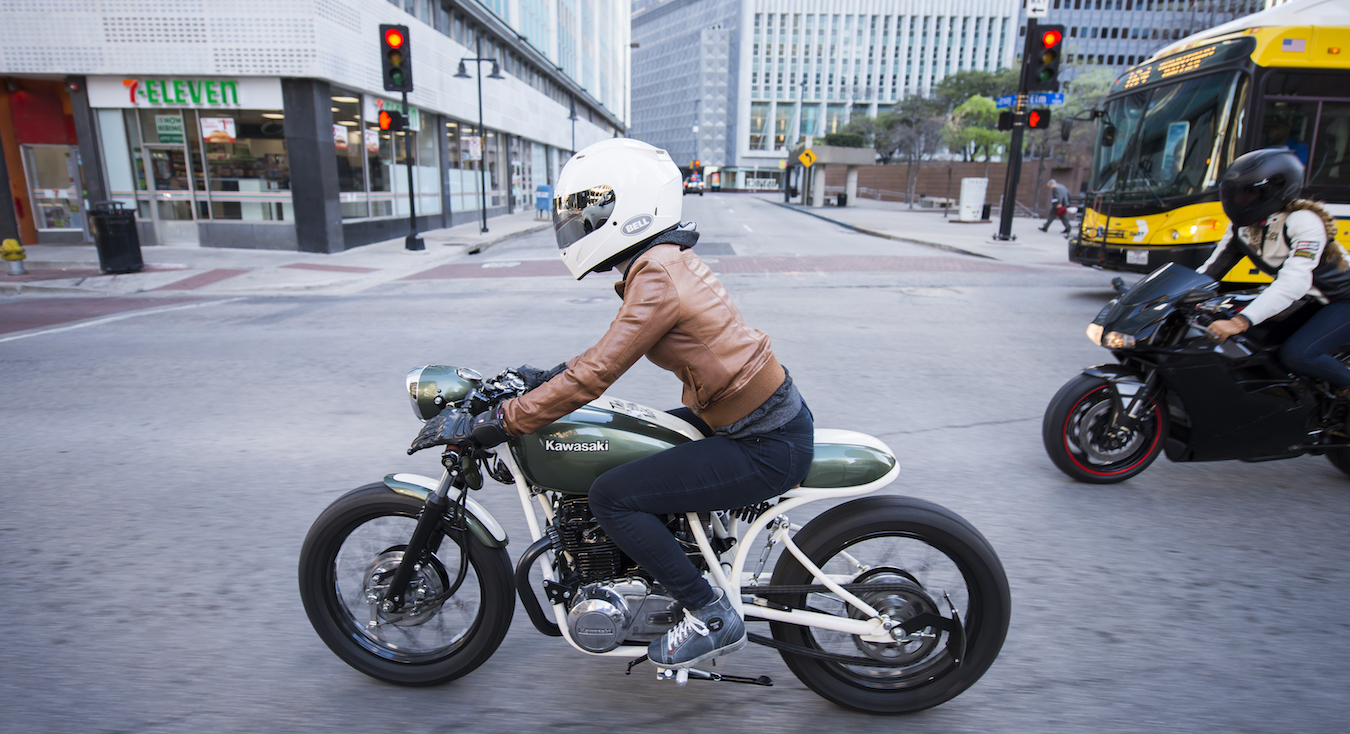 Springtime has arrived in the northern hemisphere (sorry Aussie friends!), and that means riding season. I don’t know about you, but my April is packed with moto events (Dallas Rockers vs. Mods, Denton Independent Motorcycle Show’s Pre-Show, and, yes, the Handbuilt Show) and travels (what’s up, Denver?).

I’m also finally getting to the point where I’m comfortable enough on the Rat to go out on some group rides — and I know there will be plenty this time of year! So, I thought now would be a good time to share with you all this guide I put together about group riding.

The guide is broken into two parts: planning the ride and during the ride, and I tried to only cover the really important concepts that will take your ride from chaotic to enjoyable. If you want more, there’s a lot more out there! I added my sources at the end of the article, if you’d like to read more.

As you’re reading, you might realize that a lot of these tips won’t help if you’re the only one who knows them. That’s what I realized while I was researching, and that’s what encouraged me to write this guide. So, if you found this article useful, be sure to share it (or any group riding info you find valuable!) with your favorite riding crew. And as always, please leave any questions, advice or feedback in the comments below 🙂

Preparation is extremely important for a safe, fun group ride. Which makes sense: when you’re riding, you often have to quickly react to situations you may not have expected. If you think about those situations beforehand and plan how you’re going to handle them, you will be better equipped to avoid an accident if one of those situations actually occurs. So, here’s what you need to think about and do before the kickstands come up.

1) Keep group sizes small, no more than 8 people.
Yes, I know one of the thrills of being at a moto event is being with HORDES of other bikes. However, have you ever actually tried to ride a long distance in a pack of 30 motos? It’s a lot less fun than it sounds. No one rides in formation, don’t even think about getting the whole group through an intersection at once, and only a handful of people actually know where you’re going. One way or another, a group that large, over that kind of distance, WILL get split up. Groups of eight or fewer are more manageable, less frustrating, and much safer, for reasons I’ll discuss below.

2) Ride with people with similar skill and riding styles.
It sucks to embark on a group ride and realize that everyone else wants to go 55mph. Or that everyone else is taking corners at 75mph, and you’re in over your head. The best way to ensure that you’re going to have an enjoyable, safe ride is just to talk to the other riders about what you’re looking for, and try to find others who are looking for the same kind of experience as you.

Right now, my comfort zone with the Rat is around 55-75 mph, so you won’t catch me riding with a bunch of sport bikes any time soon.

3) Know the route. (And don’t rely on your GPS/phone.)
Best case scenario, someone from the group would scout the route beforehand, look for any potential hazards, and map out your stops. If you can’t do that (it happens), take the time to check out Google Maps and figure out where the gas stations are, or if there are any roadside attractions you’ll want to stop at.

And it’s always a good idea to take a printed map along with you if you’re in even slightly unfamiliar territory. Even if you don’t think you’re going to be anywhere without cell phone coverage, it’s better to be safe than lost.

If it’s a long ride, make sure EVERYONE in your group has a map, even if they’re not navigating. That way, if anyone gets separated, they won’t have to rely on potentially spotty cell phone service to find their way back.

4) Choose a lead and sweep bike for your group.
Your lead bike will lead the group (hence the name), and they’ll be responsible for navigation, setting the speed, and communication (hand signals). They’ll also be the rider making decisions when unexpected obstacles crop up in your path.

Your sweep, on the other hand, will be kind of like the mama (or papa) bear: pulling over to help if anyone unexpectedly drops out of the ride, and “closing the door” if the group has to merge in fast traffic. Both of these riders should have solid riding experience AS WELL AS a good understanding of what it’s like to ride in a group.

5) Hold a pre-ride meeting to discuss the route, communications, formation and contingency plans.
Chances are most people in your group aren’t going to have a comm device, so before you take off, take a few minutes to talk about the journey ahead. It doesn’t have to be formal or lengthy, just go over the basics and make sure everyone feels comfortable. Where are you planning to stop for gas? What should you do if someone gets left behind? What hand signals will you use?

If you have any concerns — for instance, your bike has an insanely small tank so you know you’re going to have to get gas in 70 miles — be sure to share that with the group now so you can all plan accordingly.

I’ve already told you guys how much I love hand signals, and group rides are where they really shine. So, before hitting the road, take a minute to review hand signals and discuss which ones you are going to use on the ride. If you have people on the ride who are new to hand signals, try to keep it simple — they won’t work if nobody knows what they mean.

Staggered should be your default formation. When you get to a turn or curve, however, each rider should take the turn in the way that’s most comfortable for them, while maintaining their place in line. Think of it as free-style single file.

If someone gets separated from the group, your sweep bike should try to stick with them to make sure they’re okay and don’t need help. Depending on what you’ve decided beforehand, the rest of your group can 1) pull over (when it’s safe to do so), 2) move to the far right lane and reduce speed until the other bikes catch up, or 3) keep moving. This decision is totally based on preference, so just determine what y’all want to do beforehand so nobody’s feelings get hurt 😉

It’s going to be MUCH harder to have these discussions on the road, so make sure everyone’s on the same page before you take off!

Alright! We’ve planned the route, we know where we’re going, we’re in formation. Kick stands are up, and we’re on our way! Here’s some concepts and situations you should be aware of when you’re riding, and how to handle them:

Now, imagine that as the 6th rider is going 70 mph to catch up with the rest of the group, the lead rider realizes she’s about to miss their next turn and unexpectedly hits her brakes. Yikes.

How do you counter the rubber band effect? If you’re near the front, try to change speeds gradually, keeping an eye out for potential obstacles and turns, and use hand signals to let the other riders know what’s happening.

If you’re near the back of the group, look ahead, so when you see the riders speeding up in the front, you can, too. However, if you do find yourself falling too far behind, take your time catching up. The worst thing that can happen when you’re too spread out is that a car might try to cut in between your group, and that’s not a big deal. Just pass them when it’s safe. Speaking of…

2) Don’t pass until YOU know it’s safe.
Two-lane rural roads can be a lot of fun to ride, but it’s likely that at some point your group will to come across a slow-moving car that you want to get around. When you do, each rider should pass individually, and each rider should check for herself that the coast is clear before she attempts to pass. Don’t just assume that because the rider ahead of you is already passing that it will be safe for you to do so, too!

And after you pass, don’t forget to leave space in the lane behind you, ahead of the slow-moving car, so the riders following you can easily move back into the correct lane.

The main exception to this would be when your group is changing lanes into fast-moving traffic. In this case, the lead rider would signal, and then the sweep rider would move into the lane first, creating a safe space for all the other riders to move over (but only after they’ve each checked to make sure their path is clear!).

4) Ride considerately.
When you’re riding in a group, you have to think first about your own safety, and make sure that you don’t blindly follow the other members of your group into an unsafe situation. But you also have to think about the safety of those around you. Give the other riders their space. Try to ride as smoothly as possible. Keep an eye on your rearviews to make sure the riders behind you are doing alright. Use hand signals, and be sure to “pass on” hand signals from others.

Finally… enjoy the ride. Group rides aren’t about showing off. They’re about creating the right experience for YOU, and sharing it with a bunch of other awesome, moto-lovin’ people. So be KIND to those amazing folks. Kindness and consideration in group rides will go a long way to making sure everyone has a safe, incredible time.

And remember: these tips won’t help if you’re the only one in the group who knows them. So pass them on! I promise it’s okay to talk about safety 😉 Hope to see you on the road!