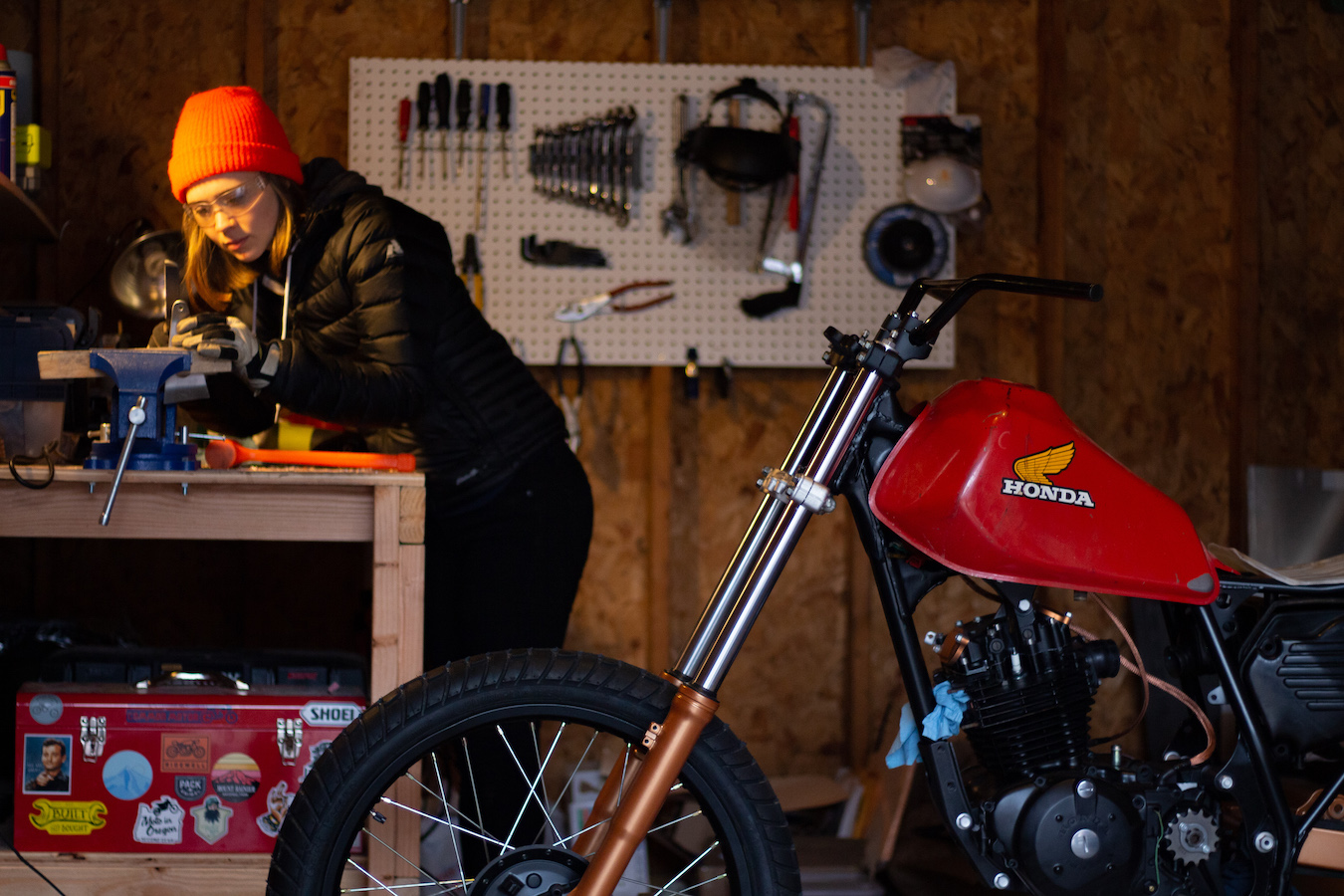 I just came inside from an afternoon in the garage. My hands are sore, I’ve got a crick in my upper back, and my arches are flatter than pancakes. But I don’t feel any of it.

Because the XL250 is finally coming together.

Two weeks ago, I felt a pulling, an intuition like rumbling thunder. Something clicked in me, like an odometer rolling over to 100,000 miles, or a clock striking midnight. It’s time.

This feeling seized on me, pulled me out of the creative daze I’ve been in for the past few months. Once again, the build is the last thing I think of before I go to sleep, the first thing on my mind when I wake up.

I can’t say exactly what sparked this impulse or why, but I’m grateful for it. I’m two months shy from being two years into this build. I think it’s fair to say that it’s time to see it through.

Since my last update, I’ve spent weeks futzing around with different ideas for the finishing touches on this build. Particularly, the tail section and side cover.

I thought fiberglass would work to make a custom fender and battery cover. But the difficulty of carving the perfect foam buck off the bike (and the gritty, toxic foam dust that coated my workshop) forced my surrender. That was October.

Next, I spent hours cutting, chipping and sanding a glued-together oak block into a pair of metal shrinking bowls. I’d never shrunk metal before, but I could figure it out, right?

Right after I finished the bowls, J and I took a planned two-week trip to Europe, which forced me to put the futzing on pause. When I returned, jetlagged in my saw-and-foam-dust-covered garage, I realized I had been overcomplicating things. As usual.

And there was a much easier way to do that than trying to quickly learn fiberglassing or metalshaping. What I needed were some quality aluminum brackets.

After this realization, I set to work gathering the equipment I’d need to make my own brackets. Some cutting wheels for my Dremel and angle grinder, an automatic center punch, a deburring tool, a more complete set of drill bits, and, of course, the 12-gauge aluminum itself.

While I waited for the supplies, I began mocking up my brackets. Manila folders, I’ve learned, are the motorcycle builder’s patterning medium of choice.

I didn’t know exactly where to start with the tail section, so I rough-cut an idea and held it up to the frame to see how it looked.

Hm… This center part should be a little wider, perhaps.

In the next version, I’d make the adjustments and refine the measurements.

I went on this way for several days, destroying dozens of manila folders, working my way from the abstract to the specific. I pulled out tools I hadn’t used since grade school: a compass and protractor, rulers and t-squares. I measured angles and worked to make straight, flush lines.

It was almost alien to me, scrutinizing a physical object in this way. Typically, I would do this kind of work on a computer, but making the patterns by hand revealed a new dimension.

Every line has a specific length, every angle an exact measurement — even if you don’t know it yet. I made all sorts of lines and angles that I didn’t know the measurement of, they just felt right. Only after I made the mark would I go back to measure it.

In the beginning, I was cavalier about measurements. But after cutting out a few dozen pattens I got a lot more specific. I found myself calculating the hypotenuse of a triangle I’d drawn, to double-check my precision. I divided fractions on paper, added up the sum of the angles of a triangle.

Eventually, through all of this calculating and cutting, I came up with a bracket style for the tail section that was… workable. Not exactly sophisticated or unique, but it would work, and it wouldn’t look half bad — if I do say so myself.

In this same way, I created designs for an exhaust shield, an exhaust mount, and a support for an aluminum number plate.

When the aluminum arrived, I got to work. I cut each bracket by hand, alternating between the Dremel and the angle grinder. I plotted out the location of each hole and marked it with the center punch, I chamfered edges, I filed and bent and shaped.

Now, a week later, I have not just one tail light bracket, but four shiny new parts for my motorcycle that didn’t exist before.

It would have been nice to use my homemade shrinking bowl to make an impressive side cover, or my carefully shaped foam to fiberglass a fender. But those were entirely new skills to learn, at the tail end of a project that just needed a little bit of polish, a touch of handmade.

In his book Flow, Mihalyi Czikszentmihalyi emphasizes the importance of “appropriate challenges” in attaining an engaged flow state. This was like that. Learning to fiberglass or shape metal was too big of a challenge for me to wrap my brain around. Both approaches left me feeling intimidated and adrift.

Learning to pattern, cut, bend and finish brackets was an appropriate challenge for me — something entirely new, but with an approachable learning curve.

I’m sure someday I will use my fiberglassing materials and my homemade metal shrinking bowls. I still want to learn those skills.

But this project is about building confidence, about not getting hung up on being perfect the first time, and about having fun. My handmade brackets helped me do that.

Is this almost the end?

Next, I’m going to send the brackets and my tank down to Texas, where my moto-savior Sofi Tsingos will work her painterly magic on them. In the meantime, I’ll make sure the wiring still works and catching up on any finishing touches (what do you mean my bike needs footpegs?).

There’s a good chance that this will be my penultimate build update. My goal is to have the XL250 fully rebuilt and running by February 12 — the exact two-year anniversary of the day I brought it home.

Thank you, as always, for following my adventure. This particular project may be coming to a close, but I have a feeling that the journey has just begun.