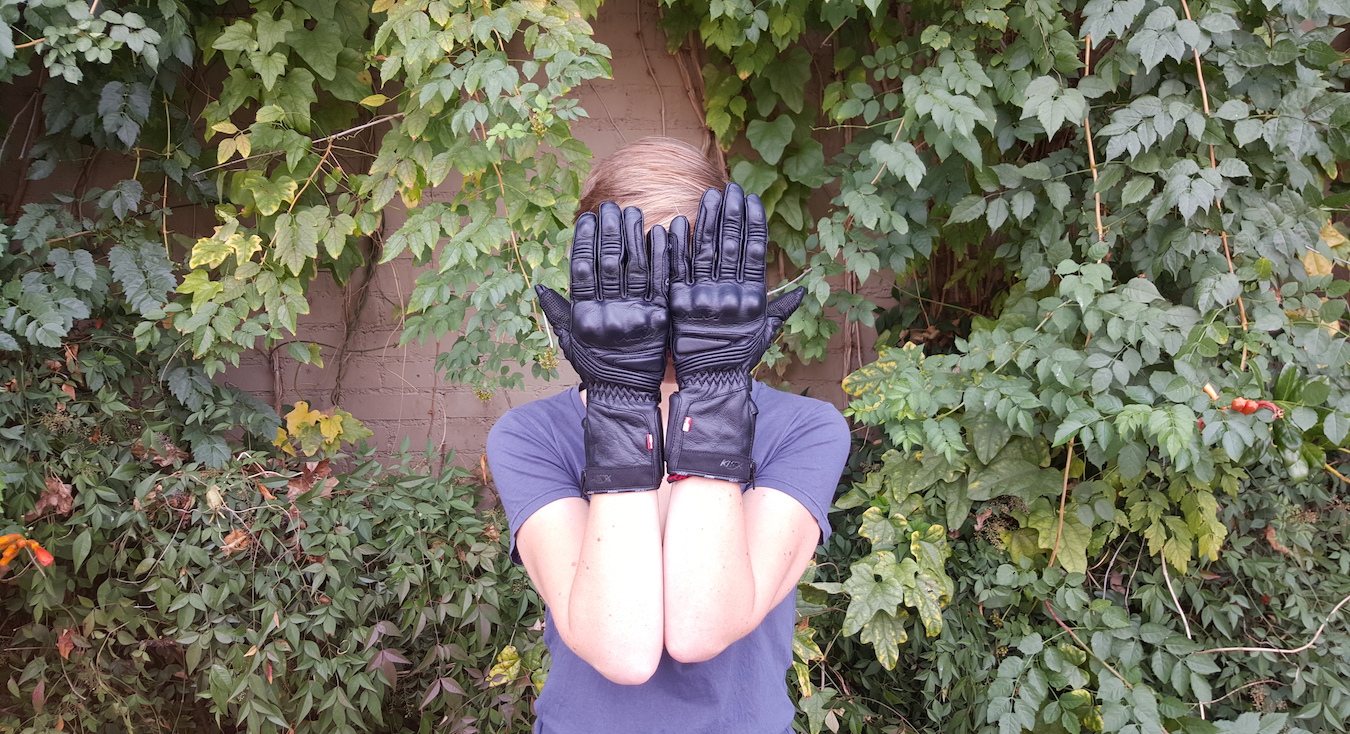 Anyone who has ever shopped for motorcycle gear before knows that safe *and* attractive is already a rare combination, but adding my petite size into the equation made shopping for gloves in-person simply impossible.

Which isn’t to say I didn’t try — I even found a pair that fit perfectly, had the safety features I wanted, and weren’t all that bad looking.

I wore them for two weeks until they fell apart. Yes, you read that right — two weeks!

When I returned the gloves, the shop clerks were clearly upset, and told me they were going to call their distributor. I haven’t been in there lately, but my guess is that they don’t sell those gloves anymore.

After several weeks of visiting local gear shops, I got pretty tired of trying on gloves that made me feel like Mickey Mouse. So, I gave in and started shopping online. One of the CycleGear employees I had spoken to recommended Knox Armour (which I really appreciated, since CycleGear doesn’t sell Knox!), which you may know as the makers of these crazy “Handroid” gloves.

The Handroids are a liiiittle much to be my daily riders, in my opinion, but when I got on their site I found their simple, sturdy-looking Covert gloves for £83 (about $120 USD, or shop on Revzilla for free shipping!). Knuckle protection, clean black leather, waterproof, and protective gauntlets. In a size small, with nearly identical measurements to my own hands. (Cue celebration!) 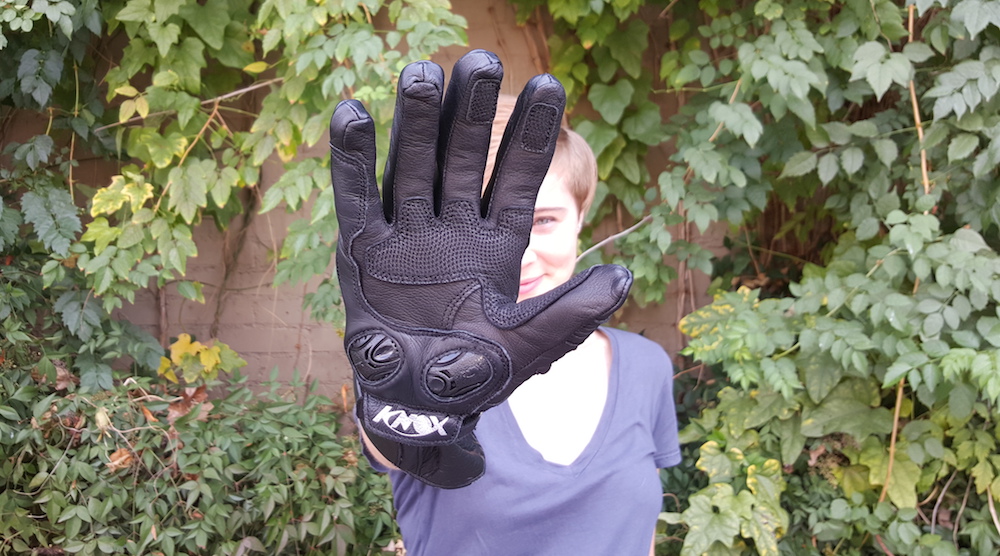 However, the feature that won me over was the patented palm sliders, which Knox claims help protect against wrist fractures.

As the site explained, many wrist fractures are caused by leather gloves ‘grabbing’ the asphalt and being either crushed or hyperextended by the push or pull of the rider’s body. The palm sliders were engineered so that if I crashed wearing these gloves, the sliders would let my hands keep moving at the same velocity as my body, protecting my delicate lady wrists. (Yeah, I’ll pull that card.)

The gloves arrived several weeks before Babes Ride Out — which was important to me because I knew I would need time to break them in, and didn’t want to do that while riding an unfamiliar bike on unfamiliar territory. And I was SO right to be concerned.

When I got the gloves, they were stiff, stiff, stiff. I could barely ride my scooter normally. And when I sweated in the too-stiff, too-tight leather, the waterproof interior chafed, leaving my knuckles red and raw. I couldn’t ride in them for more than half an hour in the still-scorching Texas fall.

Luckily, the painful phase only lasted for 3-4 wears, so when I sat sweltering in traffic two weeks later on my way to Babes Ride Out, the gloves felt like a second skin. And they made me feel like a superhero 😉 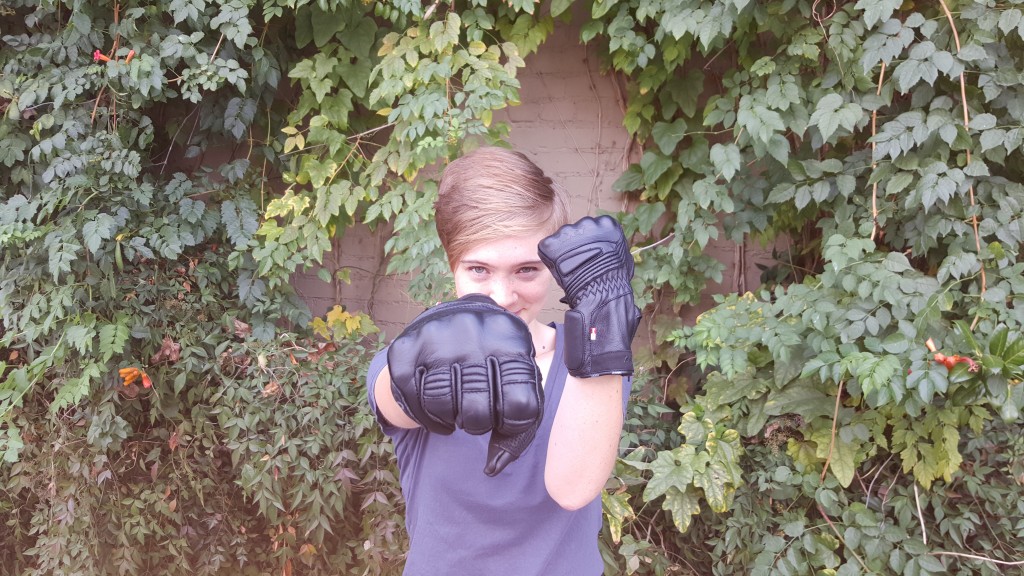 I’m pretty sure I could have mitigated the rough breaking-in week by using a leather softener, or by getting the gloves wet and wearing them until they dried (would this work, though, when they’re waterproof?). However, I wanted to see if the gloves would break in on their own, and then use any additional breaking-in steps as a last resort.

Five months later, *without* daily wear, these gloves are just a smidge too tight around the base of each of my fingers, but I only feel it when it’s hot outside (which it hasn’t been).

Despite being billed as a summer glove, if you live in a moderate climate you could probably wear these gloves year-round. I’ve worn them in 45 degree weather with no problems. Any colder than that, I just throw on some liners underneath, and tell myself that it’s just another phase in the breaking-in process 😉 I figure after a winter wearing them with liners, they’ll be a perfect fit by summer!

As arduous as the breaking-in was, I’d much rather have gloves that are a bit too small than too large. As you probably know, leather stretches, and you definitely don’t want your gloves coming off in a crash. 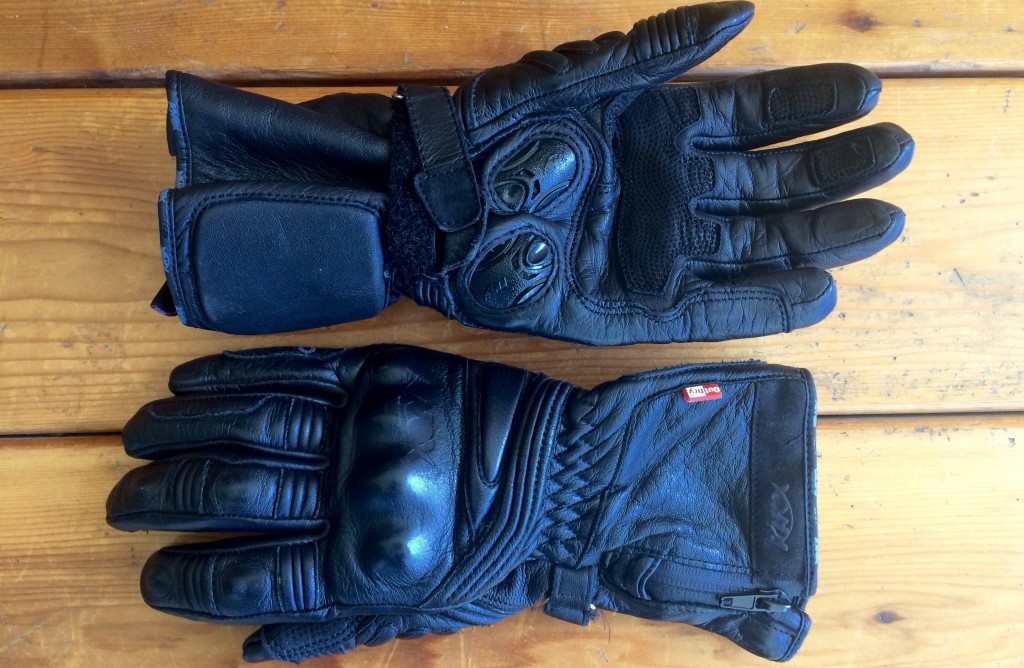 Overall, I really, really like these gloves. They’re very well made, and I love that they have a lot of protection without making me feel like I’m on the track.

How about you guys? What do you look for when buying new gloves? Do you have a favorite pair that’s been with you to hell and back? If so, comment below cause I’d love to hear it 🙂

And speaking of gear, I have the opportunity to interview some knowledgeable folks at one of my favorite local gear shops, MotoLiberty, so if you have any gear-related questions, leave them in the comments below, and I’ll be sure to ask them!