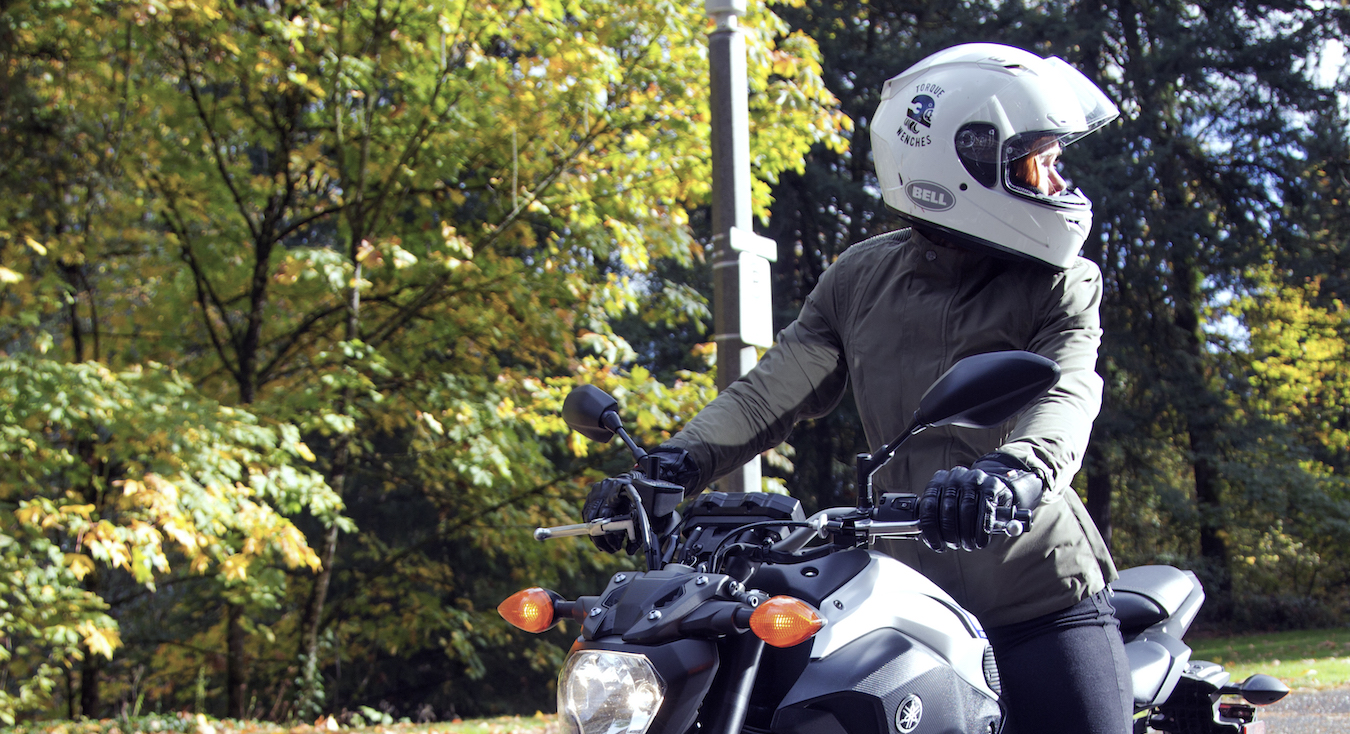 Today, I’d like to talk about one of the most contentious topics in motorcycling: lane splitting.

For a long time, I avoided the subject altogether. As a new rider, I felt that learning to ride was enough of a challenge; it didn’t make sense to add lane splitting to the mix. Not to mention, soon after learning to ride I began to work from home, so I was rarely on the road during rush hour.

But then, I moved to Oregon, where lane splitting bills have been introduced and failed many times in the past few years, and I began to see lane splitting (more specifically, filtering) in a new light.

After talking to a motorcycle cop who was pretty sure Oregon would approve lane splitting soon, I decided it was time to educate myself. Should lane splitting be legal? What research has been done on the effects of lane splitting? And, more importantly, what should a rider do to protect herself on the road, regardless of legality?

As I delved into the research, though, I began to feel uneasy. I wanted lane filtering to be a good thing, but the research was scant, complicated arguments devolved into suppositions on both sides, and the evidence I did find was subject to a range of interpretations.

At the same time, I was making my way through Jonathan Haidt’s The Righteous Mind: Why Good People are Divided by Politics and Religion, and it occurred to me that the lane splitting debate was a quintessential example of his model for our moral decision making process.

So today, I’d like to walk through lane splitting as a case study in moral decision-making. Hopefully, by taking the time to understand how we arrived at this messy situation, we’ll make room for something everyone can appreciate: a compromise.

My Beliefs on Lane Filtering

But first, so I’m not misunderstood, I’d like to make one thing absolutely clear: I believe lane filtering should be legal. These terms aren’t clearly defined, so let me clarify that when I say “lane filtering,” I mean riders should be allowed to move through slow or stopped traffic (on the highway or at lights) using the “white line” space.

Now, I’d like everyone to suspend their personal agendas and pretend with me for awhile. Pretend you’re an alien from a distant galaxy, or that you’re a researcher from thousands of years in the future. Either way, your goal is to understand one simple question: What’s the big deal with the lane splitting debate?

Which Way is Your Elephant Going?

The mind is divided, like a rider on an elephant, and the rider’s job is to serve the elephant.”

One of Jonathan Haidt’s most popular ideas is his metaphor for the two “systems” of thinking: the rider and the elephant.

For centuries now, philosophers and then psychologists have discussed a “dual process” method of thinking, in which decisions are made using two “systems” in the mind.

In the early 2000s, psychologists Daniel Kahneman and Amos Tversky conducted experiments to demonstrate the difference between “effortless intuition” and “deliberate reasoning.” Kahneman’s 2011 book, Thinking, Fast and Slow delved deeper into this idea, and demonstrated how our minds use both intuitive and rational “processes” to arrive at decisions.

The concept of the “rider and the elephant” is Haidt’s version of these systems, where the elephant represents intuitive thought, and the rider represents rational thought. His point is that the rider is usually in control of the elephant, but if the elephant doesn’t want to do something, the rider will have a difficult time getting it to change its mind.

Haidt first introduced this metaphor in his 2006 book, The Happiness Hypothesis, which I have cited before. But in The Righteous Mind, he adds to the metaphor, saying that when the elephant has strong moral feelings, the rider acts less like an agent of logic, and more like “a politician searching for votes”:

You can see the rider serving the elephant when people are morally dumbfounded. They have strong gut feelings about what is right and wrong, and they struggle to construct post hoc justifications for those feelings. Even when the servant (reasoning) comes back empty-handed, the master (intuition) doesn’t change his judgment.”

According to Haidt, this is why people will cling to strongly held beliefs even in the face of crushing evidence. You may have changed the game for the rider, but have you convinced the elephant?

What’s so emotional about lane-splitting?

Anyone who has spent even 10 minutes in bumper-to-bumper traffic knows how frustrating it is. We can all agree, traffic sucks.

Several studies have linked longer commutes to lower levels of happiness. According to Haidt, “Even after years of commuting, those whose commutes are traffic-filled still arrive at work with higher levels of stress hormones.”

And for motorcyclists, traffic especially sucks. We’re exposed to the elements, air-cooled bikes run hotter and hotter, and being on and off the controls puts serious strain on the wrists — especially riders on sport bikes and cafe racers.

After just a few minutes on a motorcycle in slow traffic, that white-line space starts to look quite inviting.

On the flip side, you don’t have to be a psychologist to see how watching a rider squeeze between lanes while you’re just barely inching along can exacerbate a driver’s already high road rage.

In my opinion, it is exactly this feeling that provides the initial gut-reaction upon which the entire lane splitting debate is founded. Motorcyclists see a solution to their traffic woes, drivers see a rider “cheating,” and from the start our arguments are on incredibly uneven footing.

Not to mention, traffic safety is tied up in important and valid concerns of harm, for both parties. Motorcyclists see drivers on their phone constantly, and are afraid of being rear-ended by a forgetful driver. Drivers see wild sport bike riders zipping through traffic at high speeds, and are afraid of witnessing — or worse, being involved in — a deadly accident.

Because riders and drivers see the situation so differently, we will have a hard time reaching a compromise until each group learns to see past their root emotional concerns.

Unfortunately, most of the arguments put forth by both lane splitting advocates and opponents are not only embroiled in these intuitive concerns, but the evidence used to support the arguments is constantly subject to rebuttal and refutation. As Haidt writes, “science is a smorgasbord, and google will guide you to the study that’s right for you.”

Learn to solve for the common goal

Instead, the question should be, “How can we make our roads safer and better for all road users, both motorcyclists and drivers?” Because that’s really what we all want: a better and safer road for everyone.

Reframing the question this way can help us see circumstances we may have overlooked. For example, the New South Wales Centre for Road Safety solved their lane filtering debate by creating an 8-week trial period in which they allowed lane filtering in a certain area. They set up reporting stations and collected data, and in the end they found that lane filtering was, indeed, safe when used responsibly, and it became legal.

But, interestingly, their report found that the population at greatest risk from lane filtering was pedestrians. They saw that lane-filtering motorcyclists would use lanes too close to the sidewalk, or ride into crosswalks, putting pedestrians at risk.

This led them to set the speed limit for lane-filterers at 30 km/h (18 mph), which would give the average pedestrian a 90% chance of surviving the crash. They also made it illegal to use the side of the road by the sidewalk for lane-filtering, among other regulations.

To me, the absence of pedestrians from our debate is more evidence of the tunnel-vision we develop in these morally-charged arguments. Because we choose our sides and set up camp so quickly, we have a hard time seeing beyond the two arguing opponents. We have to remember that no decision is made in a vacuum.

So, the answer to my question of whether or not lane splitting should be legal turns out to be a solid “it depends.” There is no one type of lane-splitting — certain types put more road users at risk — but that doesn’t mean we can’t allow the behaviors that help make riders safer on the road.

To arrive at this compromise, though, we can’t keep asking the same dead-end question. Every time we ask “is lane splitting safe?” and expect a straightforward yes or no, we push each side deeper into their own camps, buckling down to defend their position.

As Haidt demonstrates, when we debate in this way, our brains naturally shift the goal from “what is the right thing to do?” to “how can I win this argument?” We can’t help it, it’s human nature. Switching back to the pursuit of a common goal will require conscious effort, on both sides.

In a time when we are all so deeply entrenched in our metaphorical camps, it seems impossible that we’ll be able to abandon them for something as relatively trivial as lane splitting. But maybe, if we can find a way to compromise on this, we’ll set the stage for much-needed compromise on a larger scale.

After all, if you want to make big changes, you have to start small.