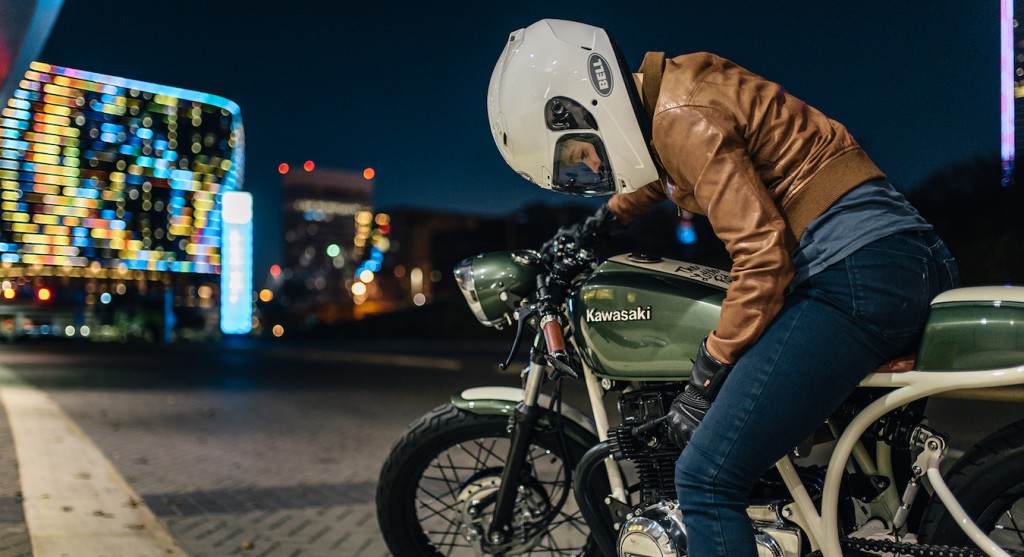 The thing is, these bikes were made for an era of riders who were expected to self-service. And a lot of people (myself included) find themselves lusting after the raw energy of a vintage bike before developing any motorcycle maintenance skills.

Hey, can you blame us? They’re sexy bikes 😉

When I first bought The Little Rat, it didn’t take me long to realize I was in over my head. Luckily, I found myself a mentor: goodhearted, brilliant Sofi Tsingos, the owner of GT-Moto.

Most of you know the story by now. The long and short of it is that Sofi built me a beautiful bike, and taught me a lot about motorcycles in the process. But, I recently moved halfway across the country, so now I’m on my own ⎯ it’s time for me to grow my own wings.

A few weeks ago, when my starter motor died, I saw an opportunity. Here was my chance to get down and dirty with my Little Rat, and get to know the parts under her casings.

At first, all I planned to do was get the starter out and tear it down to diagnose the issue. Either I would need a new one or it would need to be rebuilt ⎯ either way it had to come out.

Unfortunately, my starter motor isn’t all that easy to get to. To even reach the starter, I would need to remove (in this order):

Sofi and her dad George had taught me a lot about bikes, but I still hadn’t done anything more than change my oil or clean my points unsupervised. It was intimidating, but steps in the manual seemed easy enough, so I just decided I’d take it at my own pace.

The first day, I took off the tank, seat, and carbs. The throttle cable gave me some trouble, but with some patience, it came off, too.

The next day, I removed the foot pegs and shift lever (man, that shift lever was stuck on there!), and the engine sprocket cover. Under there, I ran into a heat-shrunk wire connection that needed to be removed, and because it was late I decided to tackle that another day.

As I went to put the engine sprocket cover back on, though, I realized something. One of the four bolts that held the cover in place was shorter than the others. And I had no idea which corner it had come out of.

Luckily, it only took a few minutes of trial and error to figure it out. But it taught me an important lesson: always document and label your pieces!

The following day I came prepared: Sharpie, ziplocks, notebook, pen. When I took the sprocket cover off for the second time, I made a note of the bolt placement, and even documented the “short” and “regular” lengths of the screws. Then, I put them in a ziploc and labeled it.

I may have gone a bit overboard, but I didn’t mind. Cataloguing everything helped me to be patient, and I didn’t lose track of another bolt or washer for the rest of the project.

After that, all I had left was the alternator cover (gasket remained in tact, score!), the starter cover, and the starter itself! So close! Right?

Nope, sorry. I learned another lesson that day: your manual isn’t always right — especially with a custom build. My oil line is hard metal, and it curves over my starter cover, which prevented me from removing the starter. So, after a few minutes of trying every angle on the starter, I decided that had to come off, too.

Finally, the starter was out. It had taken me a few days, but turned out to be pretty straightforward!

I disassembled the starter, taking great care not to misplace anything, took a few photos, and put it back together. I didn’t want to leave it apart for too long and risk losing any of the many small washers that hold the armature in place.

At this point, I was emailing a local guy who rebuilds starters. When I sent him the photos, he said to me, “You know, I’ll take your money, but I have to ask: why aren’t you doing this yourself?”

According to him, most of the labor was actually just cleaning, and all I would need to do it myself was a $20 kit. So, I decided, what the hell? I had made it this far, after all.

That evening, I ordered a kit, and started learning about starter motors.

With the help of several YouTube videos and tutorials, I had the starter dissembled and scoured clean by the time the kit arrived.

From there, all it took was a couple hours and some focus, and I had myself a clean, reassembled, rejuvenated starter.

And, when I bench tested it, it spun! I was elated. For some reason, I was sure it wouldn’t work on my first try. I mean, I must have made at least one mistake ⎯ I had no idea what I was doing!

Turns out, there’s not a single piece on your bike that cares whether you know what you’re doing or not. If you have all the right parts in the right places, it will work.

Unfortunately, my confidence in my mechanical prowess was short-lived.

As I was reinstalling the starter, I snapped a bolt. And of course, it was one of my starter retaining bolts ⎯ the absolute hardest one to reach. Such is the way of bikes.

Turns out, bikes don’t care if you have experience ⎯ but experience definitely helps.

After $50 in new tools and too many hours sitting on the bone-chilling concrete in my garage, I decided to call it. I would take the bike to a local shop (I was getting a small paint repair done anyway) and let them figure it out.

Because you know what? I rebuilt my own damn starter motor. For me, today, that’s plenty.

I’m not in this to become a master mechanic or anything of the sort. There will always be things I don’t know how to do. I just want to save some money, and also potentially save my own ass by knowing what the hell goes on underneath my tank.

Because an old bike is an old bike, and there’s not always someone around to save you.

And it was so peaceful to work in my garage on those chilly October evenings. Watching the light fade, saying hello to my neighbors, and listening to the Black Keys’ early years, accompanied by the gentle Portland rain.

Few things I do are that kind of peaceful. Very few things.

So, the next time something goes wrong (knock on wood!), I know who I’m going to turn to. I might not get it right the first time, but at least now I have the confidence to try.