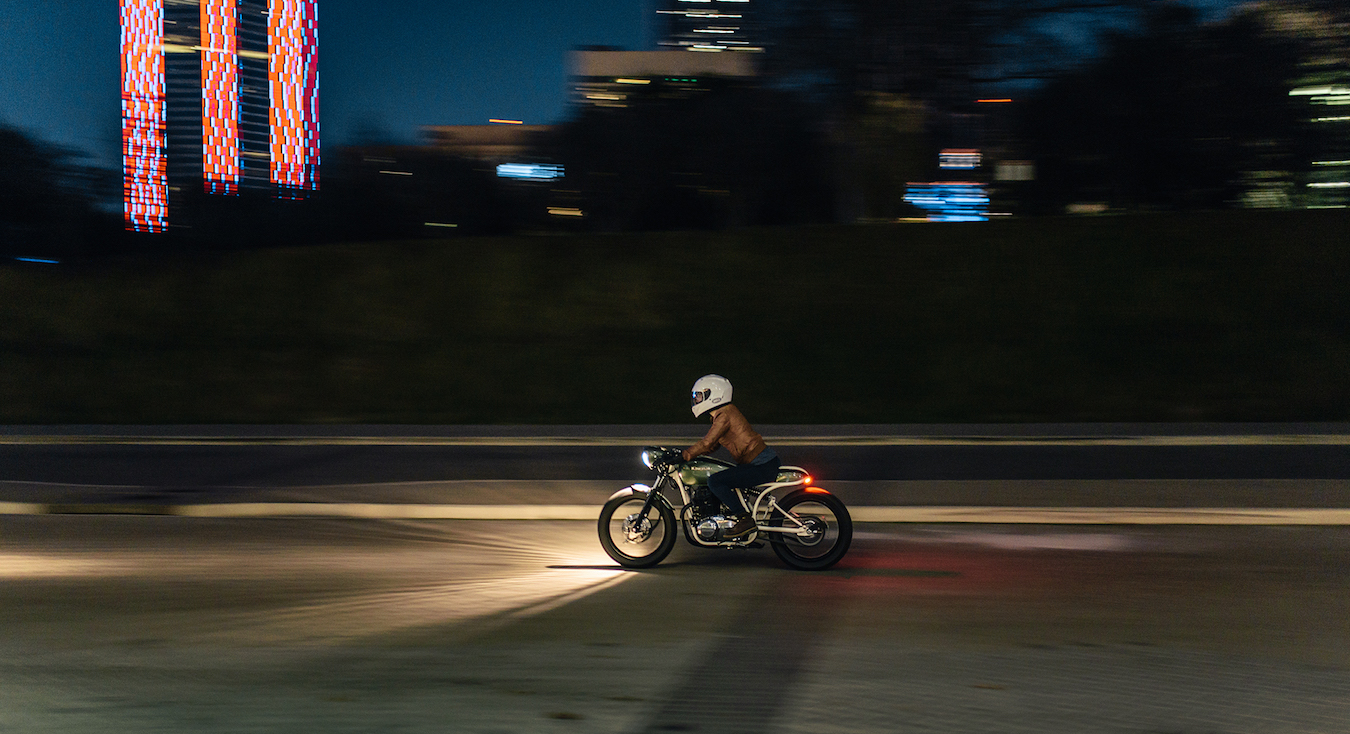 Though motorcyclists are often portrayed as risk-takers, thrill seekers and adrenaline junkies, I’ve never quite bought it. If riders only wanted to take risks, then why would a safety-oriented blog like mine even exist — much less have hundreds of visitors each month?

Before I started riding, I considered motorcycles the sole domain of adrenaline junkies, so I never even considered doing it myself. I mean, I’m adventurous — I love trying new things and being a bit rebellious. But I wouldn’t call myself a risk-taker. I always buckle up, always wear a life jacket.

Of course, it only took one ride for me to fall in love with two wheels. But I’m still the same person. My love for motorcycles didn’t transform me into an irrational thrill-seeker. That image of the motorcyclist as unpredictable, reckless daredevil… it’s simply not me.

And because you’re reading this post, I don’t think it’s you, either.

Looking beyond the risks of motorcycling

So, what is it that compels us to ride motorcycles, if not the sheer thrill of risking your life? The thrill is part of it, of course, but I refuse to believe it’s all there is. After all, if we only wanted to take risks, there are far easier (and less expensive) ways to put your life on the line.

Other explanations, like freedom or connectedness, also strike me as shallow. If that was all there was, we could get the same feeling from riding bicycles or hiking in the woods, without taking the same risks.

I’m not claiming freedom, connectedness and risk-taking aren’t an important part of the riding experience. It’s just that if those feelings were all we wanted, we could achieve them in other ways. But those other ways wouldn’t scratch the same itch we have for motorcycling.

In my view, the straightforward feelings of taking a risk or feeling freedom are too passive. I believe that the appeal of motorcycling is that it makes us active participants, in control of our experiences.

When we ride, we don’t just feel free and connected, we actively create those feelings. With every second, we both create risk and save ourselves from it.

In other words, motorcyclists do not simply seek risk. We master it.

“Flowing” with the Ride

My inspiration for this insight came from Mihaly Csikszentmihalyi’s influential book, Flow. In the first few chapters, Csikszentmihalyi describes the factors that help generate the mental state he calls flow — the feeling you get when you’re “in the zone” or “at the top of your game.”

To better understand flow, Csikszentmihalyi interviewed people who are experts in activities that require extreme skill, such as mountain climbing. And he found that, although some people may be addicted to the rush of facing risks, most of the mountaineers he interviewed actually found fulfillment from using their skills and expertise to avoid danger and control those risks.

Csikszentmihalyi also claims that control is one of the reasons we find flow enjoyable — even just for a few minutes, experiencing a world where things are ordered and under control is immensely reassuring.

In fact, I think this same flow state is what most riders are talking about when they call riding “therapy” or “meditation.” And, according to Csikzentmihalyi, exercising control over a risky situation is one of the key factors that helps us reach that state.

Cool story… But what’s your point?

You might have heard — May is National Motorcycle Safety Awareness month in the U.S., which is a topic dear to my heart. Helping riders stay safe and enjoy riding for as long as they can is the reason I started this blog in the first place.

My point is this: if we continue to portray all motorcycle riders as risk-takers, we undermine our efforts to keep riders safe on the road.

After all, if someone is interested in taking risks, why would they wear a helmet? If you want the maximum risk possible, shouldn’t an increased possibility of having your brain bashed in be a good thing?

For some, perhaps. But it’s certainly not how all riders feel — not anyone I ride with, at least.

If we reframe our perspective, however, and instead view motorcyclists as people who want to master dangerous risks, then wearing a full-face helmet and protective gear makes complete sense. Motorcyclists who want to overcome risk will embrace wearing a full-face helmet since it not only increases their chances of surviving an accident, but signals to other riders that they are not afraid to confront and control the risks of riding.

From this perspective, practicing your emergency riding skills, wearing protective gear and increasing your visibility are absolutely badass endeavors.

I’ve always said that improving motorcycle safety will require a culture change. In fact, in his book, Motorcycle Safety and Dynamics, Vol 1, motorcycle safety expert Jim Davis tells new riders to behave atypically if they want to survive their first year of riding.

Certainly in many riding communities things have gotten much better for riders who prefer to master risks instead of just taking them. But the fact that helmet usage in the US was only at 64% in 2014 indicates that we still have a ways to go.

Luckily, this simple attitude adjustment — one that I personally find very appealing — could help us close that gap.

There will always be risks beyond your control, but embracing motorcycle safety as a courageous, worthwhile endeavor will help you survive to enjoy a ride another day.

Because really, what more do we want than to ride again tomorrow?

UPDATE 5/16/17: Originally, the title of this post said “Not all Motorcyclists are Risk-Takers…”, which I quickly realized was inaccurate. Riding is an inherently risky activity, and I never want to imply that it isn’t.

My goal was to discuss the idea of riders as people who take irrational risks, and how it would benefit our safety culture if we could ditch that stereotype, which I believe doesn’t apply to the majority of riders.

Also, many thanks to my readers who are willing to sink their teeth into these complicated constructs with me! I appreciate every one of you.