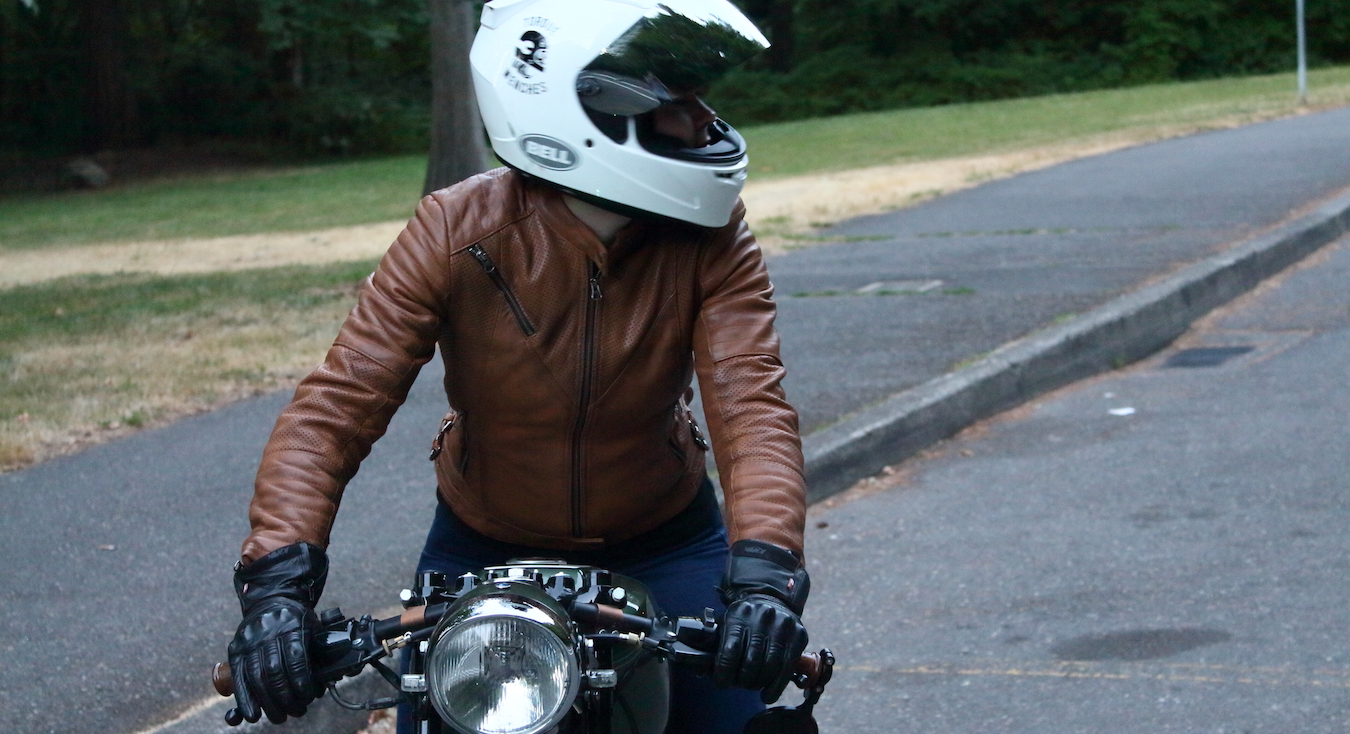 Think back to the last blockbuster action movie you saw in theaters. Chances are, a motorcycle made an appearance. Motorcycles are in right now, and lately it seems like every major action movie tries to squeeze one in.

Ever since my dad first introduced me to Star Wars, I’ve been an action movie fan. Indiana Jones, the Matrix, Die Hard… give me explosions and a sexy, rebellious lead and I’m in. And now action movies have more motorcycle scenes? I’m not complaining.

But one thing troubles me about this new wave of motorcycle movies: Too many heroes don’t wear helmets.

When I first started riding, every unhelmeted rider I saw in the media put me in a bad mood. Would it really be so awful to show your character slipping on a helmet before hopping on their bike?

Over time, though, I got used to it, and my agitation faded to cynicism. I still wished more riders would be shown wearing helmets in major movies, but what can one lone rider/writer do about it?

Then, last month, stunt rider SJ Harris passed away during the filming of Deadpool 2. Based on the description of the accident, it sounds as if a helmet could have saved her life.

I have no experience with the world of stunt-riding, so this article is not a commentary on the circumstances surrounding her death. Instead, I’d like to focus on this question: why did her character need to be riding without a helmet?

“There was no time to grab a helmet!”

The first contender here is that maybe Domino (the character SJ was stunting for) didn’t expect to ride a motorcycle that day, like Tom Cruise in the most recent Mission Impossible:

This is probably the biggest excuse Hollywood has. If the character needs a motorcycle for a quick escape, they won’t have a helmet.

And I’ll concede the point, but it has to be said: a motorcycle is a bad vehicle to choose if you’re running from bad guys with guns. All they have to do is shoot out a tire and your day just got a lot worse.

Possibly the only exception I truly can’t argue with is an invincible superhero. But isn’t it an even better message to show that even Captain America wears a helmet (of sorts) when he rides? 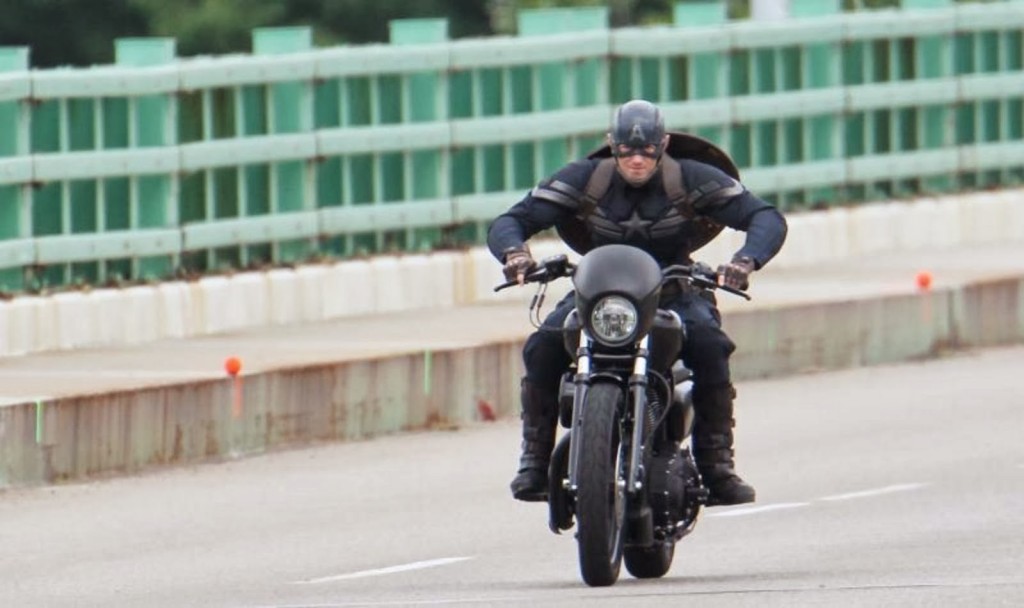 And you didn’t grab a helmet… why?

Even allowing for “escape motorcycles,” though, there are plenty of situations in recent movies where a rider could have found a helmet before taking off.

For example, the Jurassic World team had plenty of time to prepare before unleashing the raptors…

… in the first Star Trek reboot, Chris Pine was just out for a leisurely cruise…

… and in Avengers: Age of Ultron, Scarlett Johansson had ample time to slip on a helmet before they dropped her out of the jet:

So, I’d like to propose a new rule of thumb: if the character is planning to ride a motorcycle, they should plan to wear a helmet.

But wait… there is one contingent of movie motorcyclists who often wear helmets: the expendables. In the first Deadpool, they used CGI riders, so helmets were not only easier production-wise, but they made the attackers look more intimidating:

And in John Wick 2, Keanu Reeves pursues an expendable rider wearing an AGV helmet, who immediately dies after a collision with Keanu’s Chevelle.

Wait… he dies? Notice, his bike takes the brunt of the impact. Certainly a head-on collision at 45-50 mph (let’s say) is a bad effing day. But would he have died on impact, like the character did in the movie? I’m not so sure.

That’s the thing about expendables: they die. In our current movie culture, expendables wearing helmets die, and heroes without helmets survive after navigating extremely dangerous situations on two wheels.

That is not the story we should be telling.

“But I’m not affected by what actors do in movies!”

Undoubtedly, some people, even some religiously helmeted riders, will think I’m making a big deal about nothing. And certainly, on an individual level seeing one rider in a movie wearing a helmet (or not) won’t change a person’s beliefs.

But on the scale of billion-dollar movies seen by billions of people, only a small fraction of whom ride motorcycles, the minor influence of each movie adds up. And there’s no denying that exposure can make some things “feel normal,” and others not.

Here’s a personal example: last year I moved from Texas, where a helmet isn’t required for riders over 18, to Oregon, where helmets are required for everyone. While I lived in Texas, I got used to seeing guys on Harleys doing 80 on the freeway without a helmet on. It was normal.

But after eight months living in Oregon, I went back to visit my family in Texas. The first time I saw a rider on the road without a helmet, it set off alarm bells in my mind, as if I were watching an accident about to happen. In just a few months, sharing the road with an unhelmeted rider went from “normal” to “immediate danger,” without me even realizing it had happened.

Like it or not, we are all products of our society. You, me, everyone. It’s purely egotistical to think otherwise. And that’s why the cultural representation of riders matters.

One in four riders is not rare

Thankfully, it seems that there is a movement in the motorcycle community (especially among younger riders) toward wearing helmets. But the NHTSA estimates that 26% of riders didn’t wear a helmet in 2016. That’s one in four riders.

Not wearing a helmet, like not wearing a seatbelt, is such a fundamental safety measure that it should be the extreme exception to the rule. And like seatbelts, making helmets normal requires a culture shift. Like it or not, movies are a big part of that culture.

The irony, though, is that blockbuster movies both shape and reflect culture. It’s a business, after all — they’ve got to give the masses what they want. So, the responsibility falls not to Hollywood, but to us: if we don’t speak out about unhelmeted heroes, Hollywood won’t ever change.

That’s why I finally decided to speak out. And I hope you will, too.