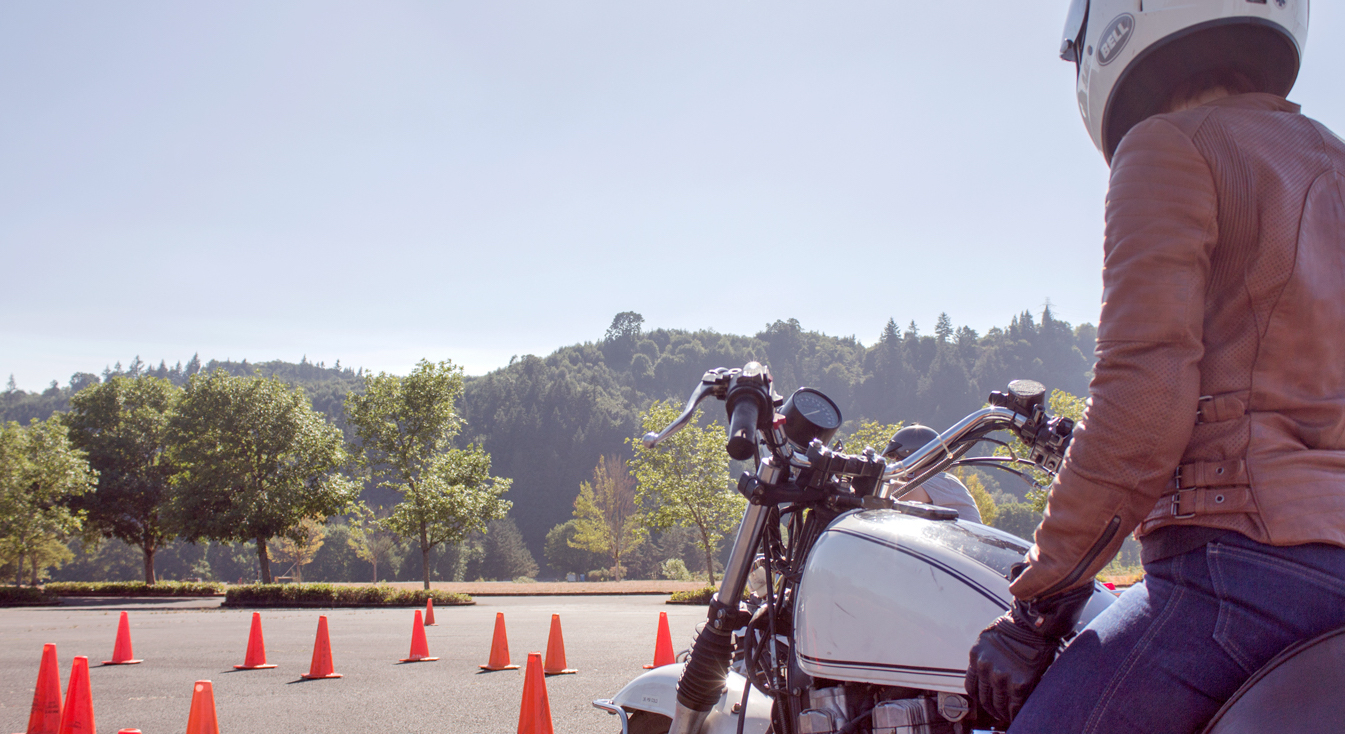 But, I have a confession: Not once have I done any real riding practice since my first safety class. I know. I should turn in my safety blogger credentials now. My main excuse is that I’m afraid of dropping my bike. It’s got a lot of paint, okay? And even when I’m motivated to get out and practice, I never know where to start.

A few months ago, I realized I wasn’t ever going to practice on my own. So when the Northwest Motorcycle School announced a weekend clinic in August, I signed up without hesitation.

A Tentative Start to The Day

A few weeks later on a sunny Saturday morning, I pulled into a parking lot south of Rainier, OR. Orange cones polka-dotted the lot, and three Kawasaki Police 1000s sat waiting.

I chose the Northwest Motorcycle School for a couple of reasons. First, they use the same drills as the King County motorcycle police training program, which is pretty neat. And even more important for me, they let you use their bikes. 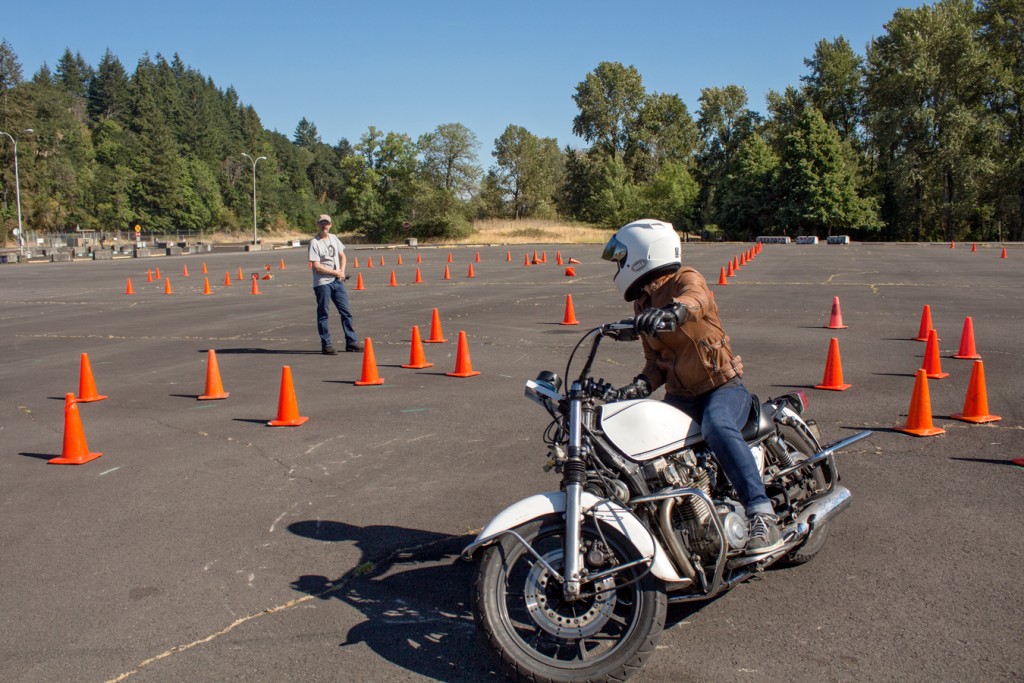 But what I didn’t know was that everyone else had backed out from today’s clinic because of the heat. So I ended up having a full day private lesson with the instructor, Curt.

After some getting-to-know-you conversation, we hit the range. As I made my first few long laps of the day, I was surprised at how much I enjoyed the Police 1000. It was smooth in first gear, and nimble for its size. It had a comfy seat, too, made for long days in the saddle — which is good, because that’s what I was in for.

The History of the Northwest Motorcycle School

Curt eased me in to the tight maneuvers. First, he had me play with clutch control, balancing each wheel on a block of wood. Then, we moved on to unstructured figure eights, which he challenged me to pull tighter and tighter. Before long, though, I found myself making tight u-turns in an Iron Cross, and practicing set points in a punishing (I felt) offset weave. It was hot, and it was hard work. 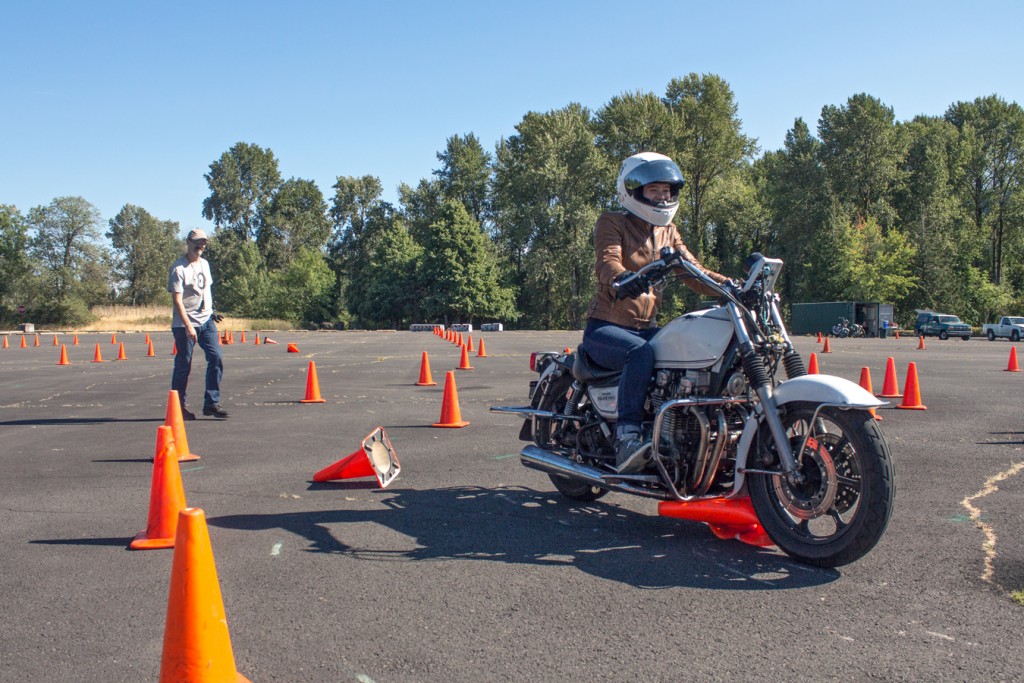 Between exercises, Curt and I took long breaks, replenishing the water we’d sweated off on the range. During those breaks, I asked Curt about the history of the Northwest Motorcycle School.

Originally, the King County officers developed this curriculum because they “got tired of their guys falling off their bikes,” as Curt put it. It was the first in the country, and it cut the rate of police motorcycle accidents “by a lot.” After the officers who developed the course retired, they decided to open up a school for the public. “They got tired of chasing criminals, but they still loved teaching the class,” Curt said.

Curt took the class for the first time with the original officers. He liked it so much he came back every year to brush up on his skills. Later, he became an instructor, and stuck with the school after the officers retired and passed the business along to another owner. When the second owner decided he was ready to move on, Curt didn’t see another option: “I had to buy it,” he told me.

“This is what I love doing” 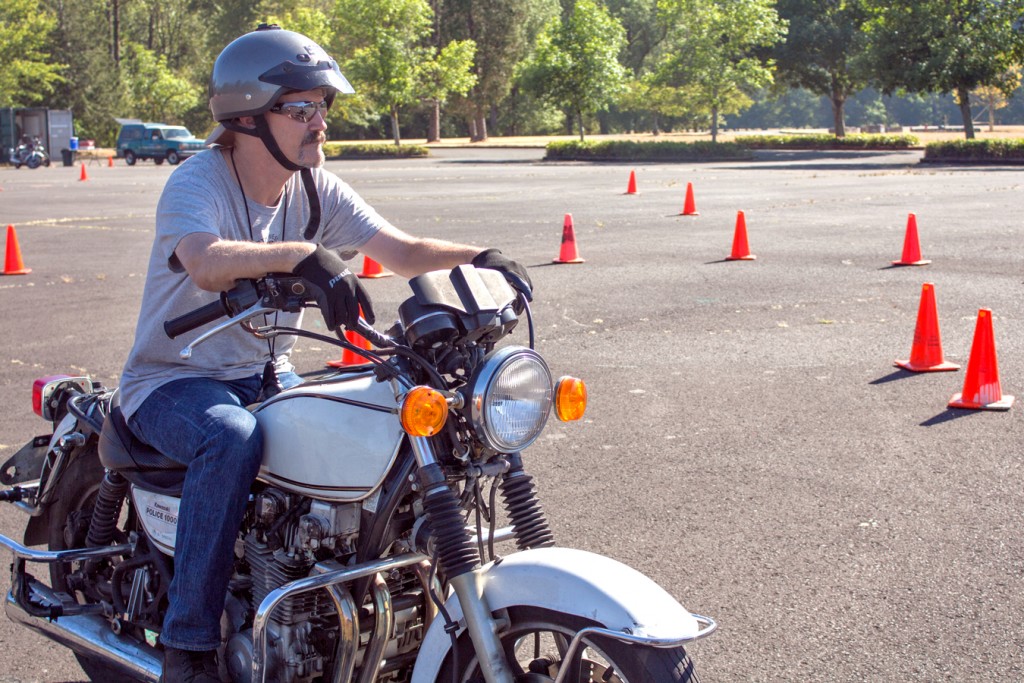 Curt’s passion for this course is clear. Any other instructor might have cancelled a class with only one student, especially on a 90+ degree day. Not Curt. When I thanked him for it, he told me it was no problem, it’s what he loves doing.

Curt was a patient instructor too, and great at keeping my frustration levels in check. When I got particularly worked up about one exercise in particular (the Iron Cross), he flagged me down. “I smell your clutch,” he said. “How about you go get your bike some air?”

I didn’t smell anything, but I understood. After a couple long laps around the parking lot, I started doing the u-turns like a pro. As we moved on to the next exercise, he told me, “You know, I was lying to you about your bike back there. But it worked, didn’t it?”

My Nemesis: The Enclosed Figure Eight

Over the course of the seven-hour day, we worked on many maneuvers, mostly focusing on clutch control and tight turns. And, to be honest, my first attempts at most of them were pure cone massacres.

But the hardest one for me was the second-to-last maneuver: the enclosed figure eight.

This figure eight was lined with cones on all sides, so there was little room for deviation. You had to stay to the outside of the cones (to give yourself room) while looking for your next set point — which was directly behind you.

Every time, I had one of two problems. Either I wouldn’t turn hard enough, because I wasn’t looking for my set point, or I wouldn’t give it enough power, and end up on the ground. Thank goodness for highway bars.

I must have spent two hours on this exercise. I took breaks and came back to it, tried other exercises and came back to it. My mind developed bad habits — I would hit the same cones almost every time. I could feel my fear and self-doubt as if it were a tangible obstacle, as real as the orange cones. 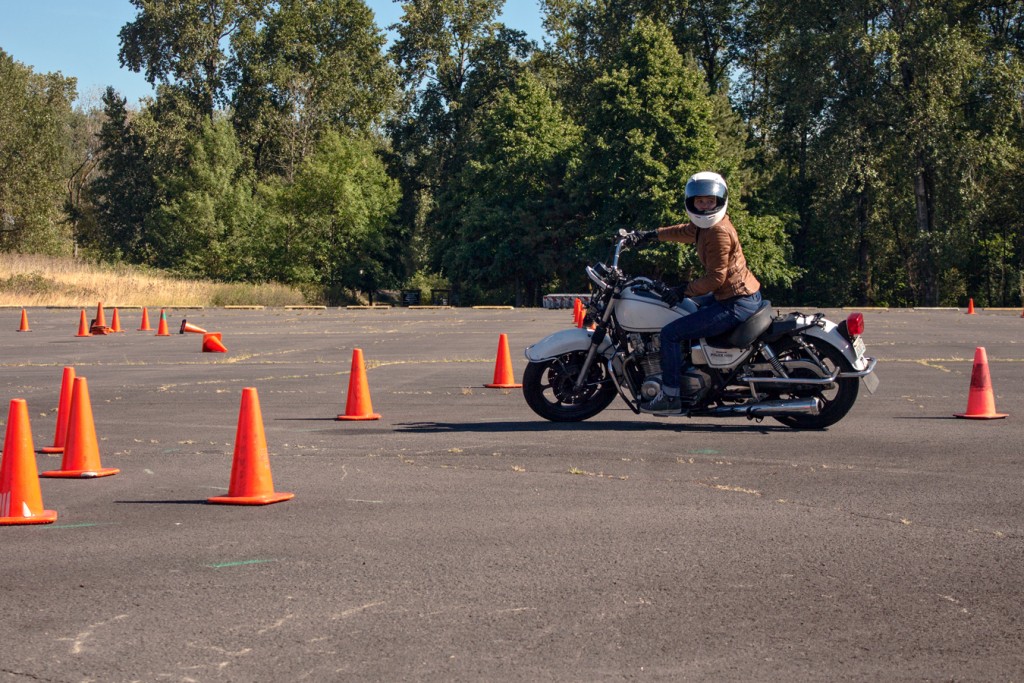 The common motorcycle adage is to “look where you want to go.” But I discovered that, even if I was looking at the right spot, sometimes my mind would be looking elsewhere. As soon as a shred of self-doubt appeared, I would go off course.

By the end of the day, I had made about ten perfect figure eights. I wasn’t consistent, but I had done it, and I had repeated it.

Riders say all the time that riding is as much a mental activity as it is a physical one. Anyone who has ridden a motorcycle has felt that connection. But never have I felt it as strongly as when I was trying to conquer that figure eight.

The Little Rat Joins In 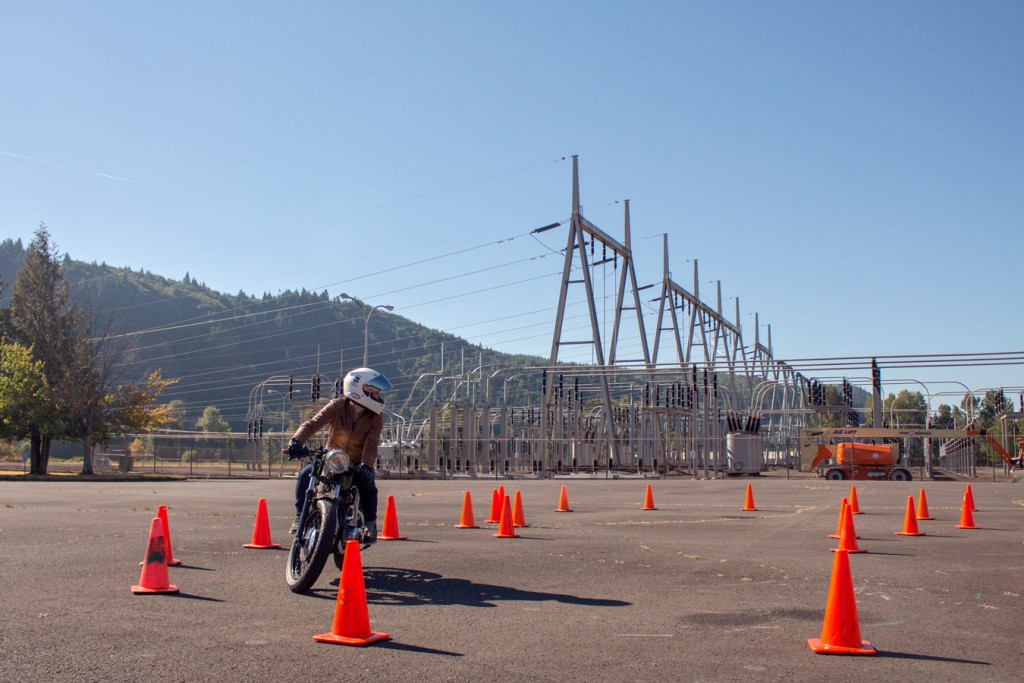 At the end of the class, I decided to see if I could put the Little Rat through the same paces as the police bike. I found out that my clutch control on The Rat was much better than on the police 1000s. I’m more familiar with its sounds, which helped me give it the right level of power to handle tighter corners.

I also let Curt take the Rat out for a spin, mostly because I wanted to see how it performed on the exercises. Curt handled every one flawlessly, and seemed to have a good time doing it. 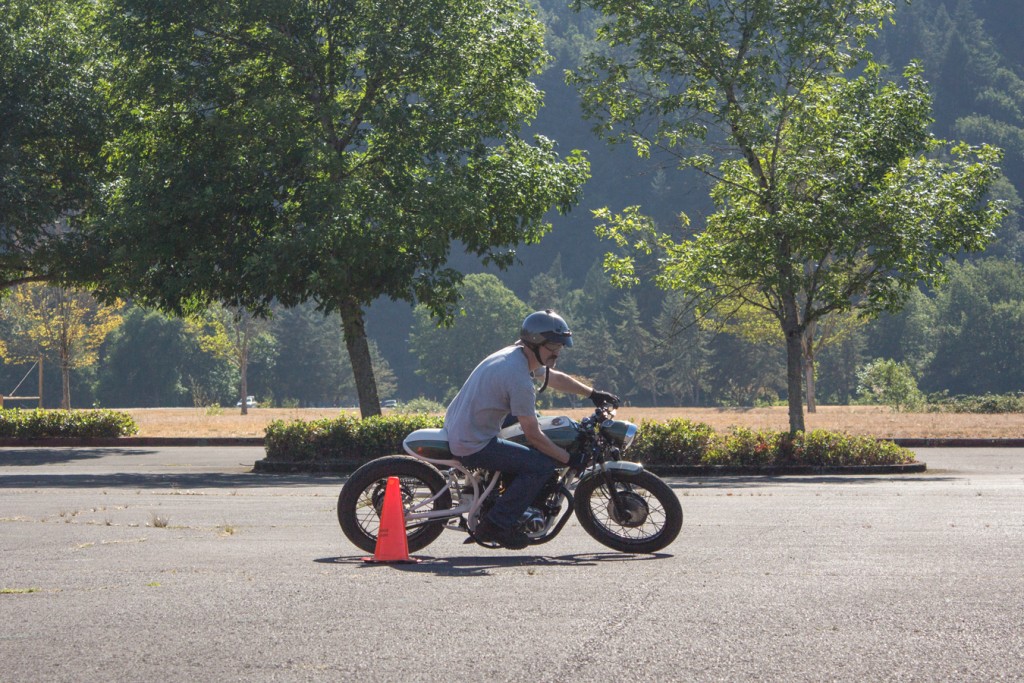 When I got home that night, I was bone-tired. The heat, the intense focus, and the physical exhaustion had drained all my energy, for the first time in a long time.

I melted onto the couch and woke up sore the next morning, feeling, somehow, changed.

In the days before this class, I had harbored an ugly, egotistical fantasy: I would complete the exercises perfectly and dazzle the instructor, who would tell me I hardly needed training.

I know now that even considering such a scenario showed how much I had to learn. These are not the kinds of skills street riders develop naturally. If you’re a careful rider, you can make wide turns and long stops for years without any consequences.

And hopefully, you won’t ever need these skills. But in the rare moment you do, they could be the difference between a close call and a serious situation.

As for me? I’m hoping to take the full four-day class next year. I’ve still got a lot to learn. 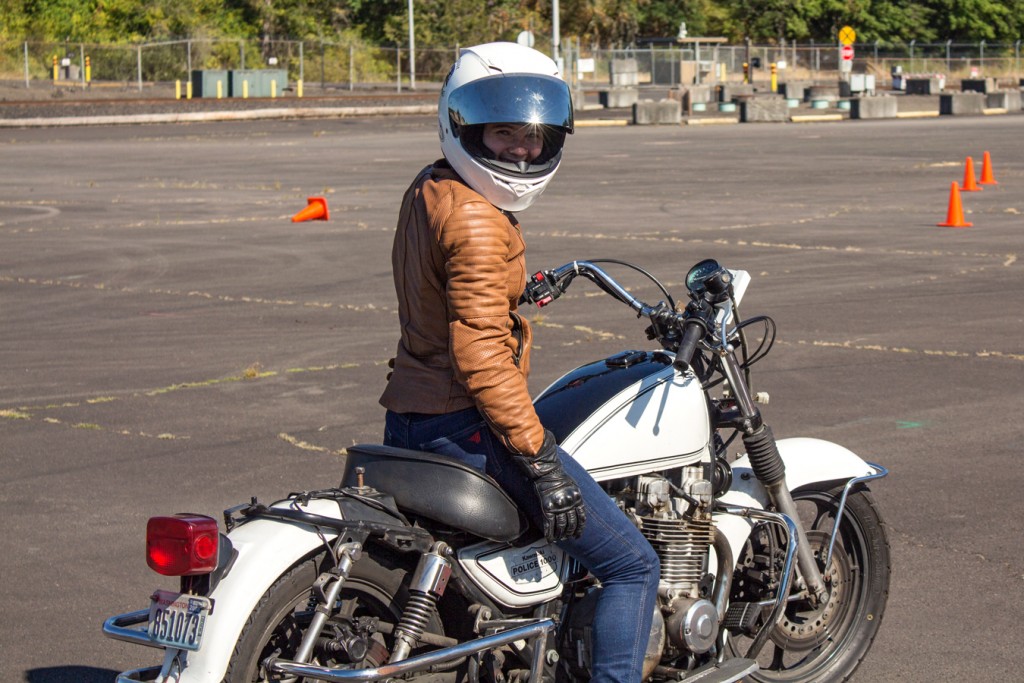 Disclaimer: I paid for this course with my own money, and the Northwest Motorcycle School did not ask me to write this review. All opinions are unabashedly my own.