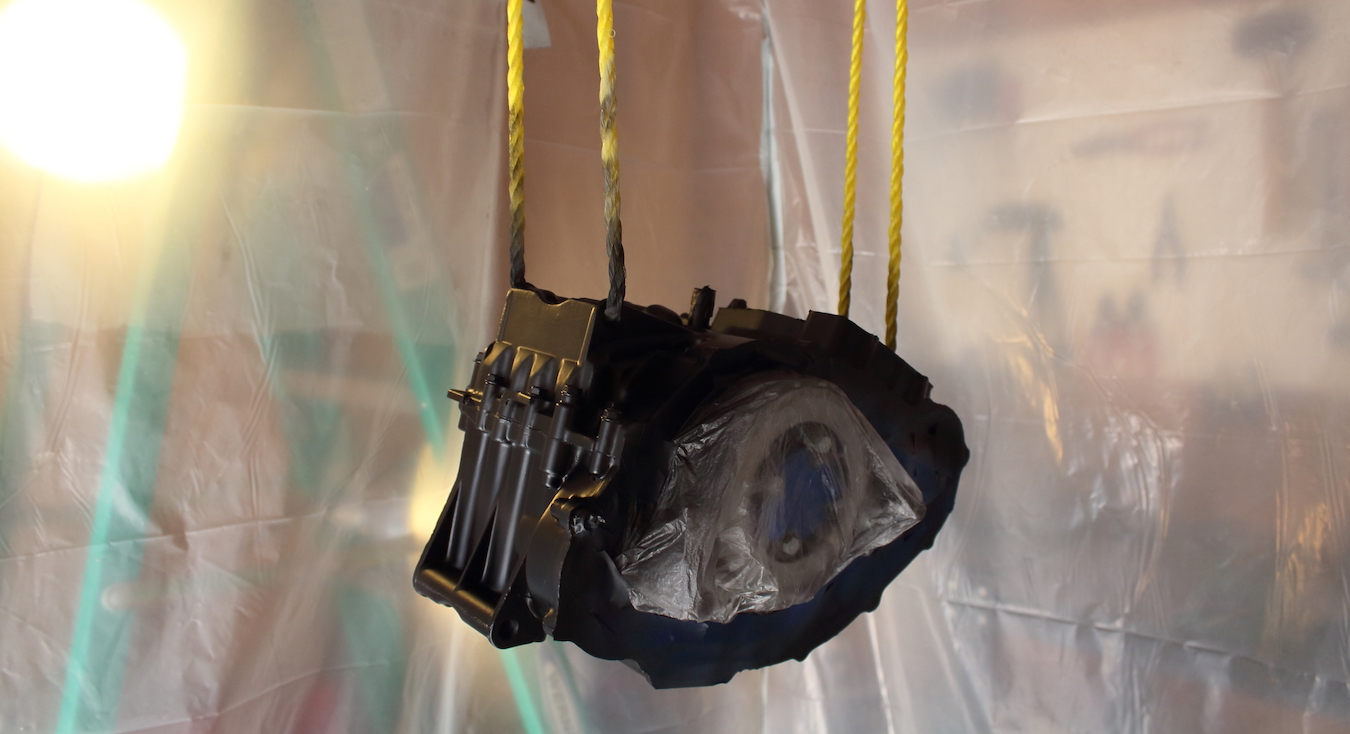 This year, I spent the entire Thanksgiving holiday painting my XL250 engine.

Originally, I hadn’t planned on doing any paint myself. To be honest, painting intimidated me. I assumed it required some sort of magic I didn’t possess — or at least some equipment I couldn’t afford.

Certainly, there is no replacing the experience of a painting pro. But, for my first major paint job, I’m happy with the results. And more importantly, I’m glad I did it myself. 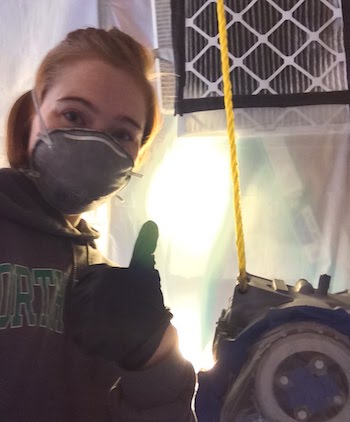 The Challenges of Paint Prep

I’d heard many times that 90% of a good paint job is preparation. So, in the weeks before Thanksgiving I dedicated most of my free time to scrubbing the engine.

Initially, cleaning the engine seemed like a straightforward task. But, like everything I’ve done so far on this build, it was easier said than done. Years of neglect left layers of baked-on red dirt, and the fins and the curves of the casted aluminum seem to have been specifically engineered to be impossible to clean.

Over three consecutive weekends, I spent hours crouched over a plastic tub, wearing goggles, a face mask, and the toughest rubber gloves I could find. On my left, I kept a stockpile of brushes — round ones in every size, wire-bristled ones, worn-out toothbrushes — and on my right, an arsenal of chemicals.

My boyfriend joked that it looked like I was running a meth lab, and there may have been some truth to that: parents passing by on the sidewalk gave me dirty looks and shielded their kids.

By the time I was done, I had exhausted two cans of brake cleaner, two cans of engine degreaser, and a small fortune in brushes. 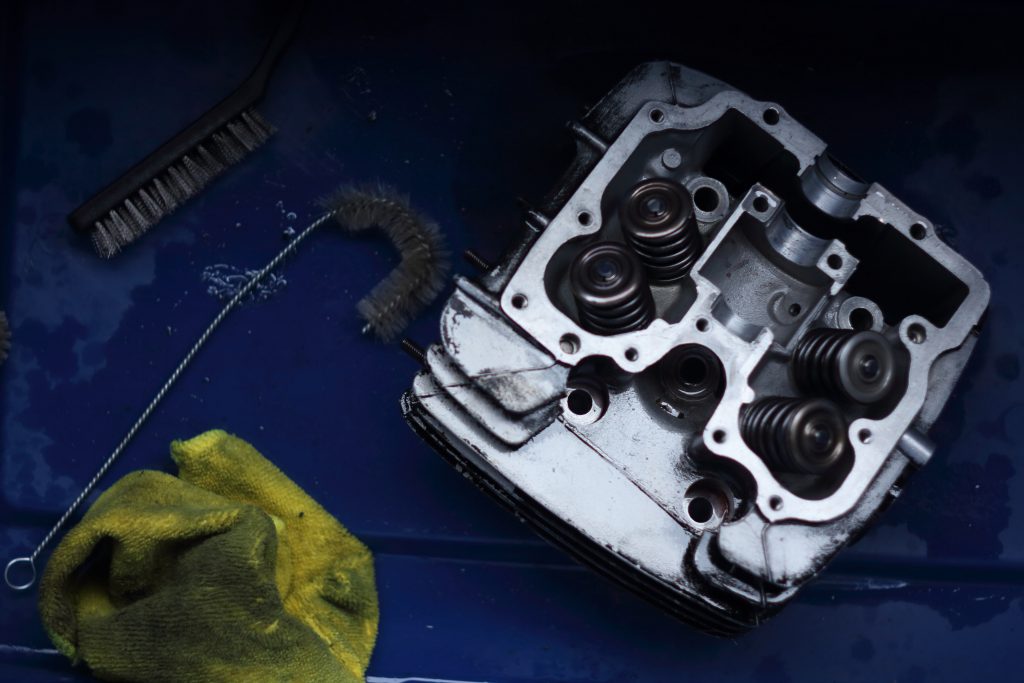 As I labored over the engine, I thought a lot about cleanliness. I’d never realized how much we take cleanliness for granted. Not only do we have high-tech soaps and washing machines, but we’ve created a society in which you could go all day without coming into contact with much, or any, dirt.

Unlike on this hard-working farm bike, the “dirt” that accumulates indoors — on shelves, countertops and trophies — can easily be wiped away with a wet cloth.

Growing up in a Christian home, I was often reminded of the ethic of cleanliness — “cleanliness is next to godliness,” “the purifying power of prayer,” “create in me a clean heart,” and so on. After cleaning this engine, I realize now that I never fully appreciated the value of purity, and specifically what a difficult proposition it would have been in a pre-industrial (or even industrial) society.

Of course, as an ultimate goal, purity is pretty boring. As I’ve mentioned before, I take an odd delight in the sheer griminess of old motorcycles. When I’m in the garage, I wear my oil and grease streaks with pride.

Some dirtiness may come from neglect and laziness, but there’s another kind that signifies vitality and character. I’ve always admired those who can do what needs to be done — mud, soot and refuse be damned.

Cleanliness may be next to godliness, but if you ask me, godliest kind of clean is the clean you get after a hot, well-earned shower.

Laying Down the Paint

The day before Thanksgiving, I constructed a paint booth with duct tape and plastic drop cloth, and hung it from my garage’s rafters. I set up a “venting system” with a step ladder, a box fan and an AC filter, and added a portable heater to keep the booth nice and warm. 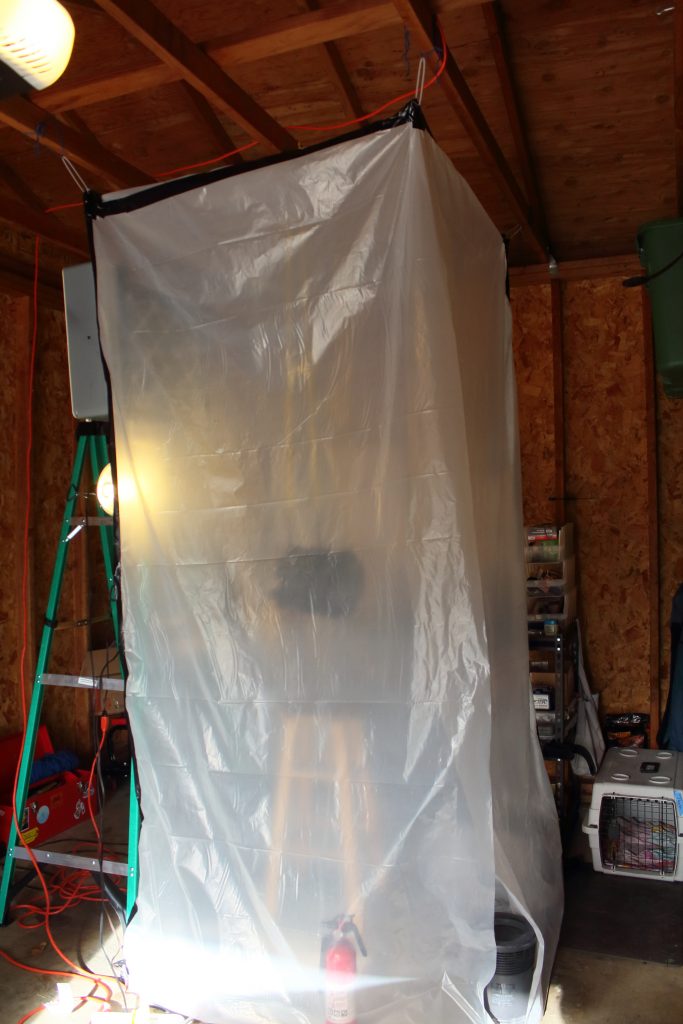 The whole thing worked much better than I expected. I did have to use some weights inside to keep the “venting system” from pulling the “walls” in, but other than that my $40 booth performed quite well.

Putting together the paint booth took the entire morning and a bit of the afternoon, and if I’m being honest I think I was procrastinating a bit, too. It was four in the afternoon before I finally built up the courage to paint my side covers.

I put on my mask and gloves, took a deep breath, reminded myself to take it slow, and pressed the trigger.

On my first coat of primer I caused a few runs, but thankfully I caught on faster than I thought I would. By the time the sun set, I had two freshly painted side covers. 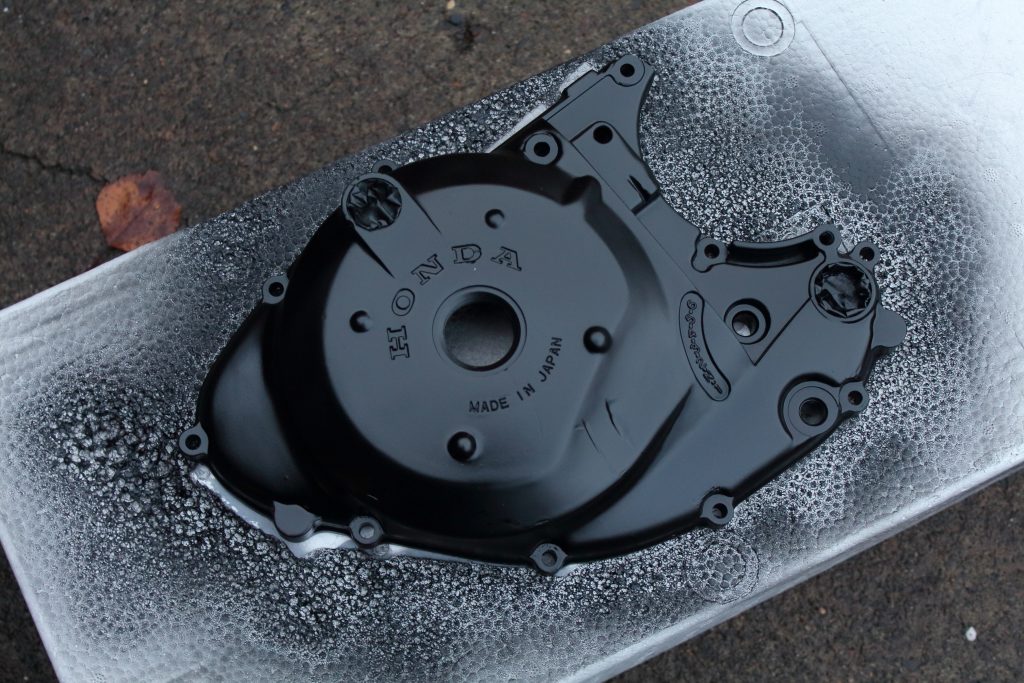 On the morning of the second day, Thanksgiving day, I was giving my cylinder and head a final clean when I realized there was still some dirt hiding in the cooling fins. I swear, it never ends.

After another few hours of cleaning, I began to mask off my gasket surfaces — a tedious, yet oddly satisfying task. 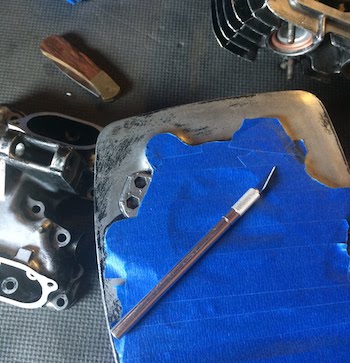 Finally, by mid-day Friday, my engine was painted. The crankcase, the cylinder, the head cover… all of it. It took two and a half days, but the work I’d been worrying about for weeks was finally done.

When I first began this build, I didn’t feel as if my project had officially “started.” As I tore the bike down, a small part of me feared I’d never put it back together. I was scared that I’d get bored, get discouraged, get frustrated, and eventually give up, like so many other would-be builders before me.

Now, though, I’m no longer afraid of that. I’m fully committed to this project, and I know I’m going to see it through.

It hasn’t been easy to get to this point. When I started this build, I didn’t even know enough to write my to-do list. I felt like I was building a sand castle one grain at a time, with no plans or instructions.

But now, everything is starting to come together. These freshly painted engine parts are only the beginning. Soon, I’ll put the engine back together, and the suspension, wheels and frame will follow.

I know I still have a lot to learn, and I’ll undoubtedly face many challenges ahead. But, arguably, the hardest part is already over. I have a clear path ahead of me now, and even if that path gets murky I know I have the determination and grit to figure it out.