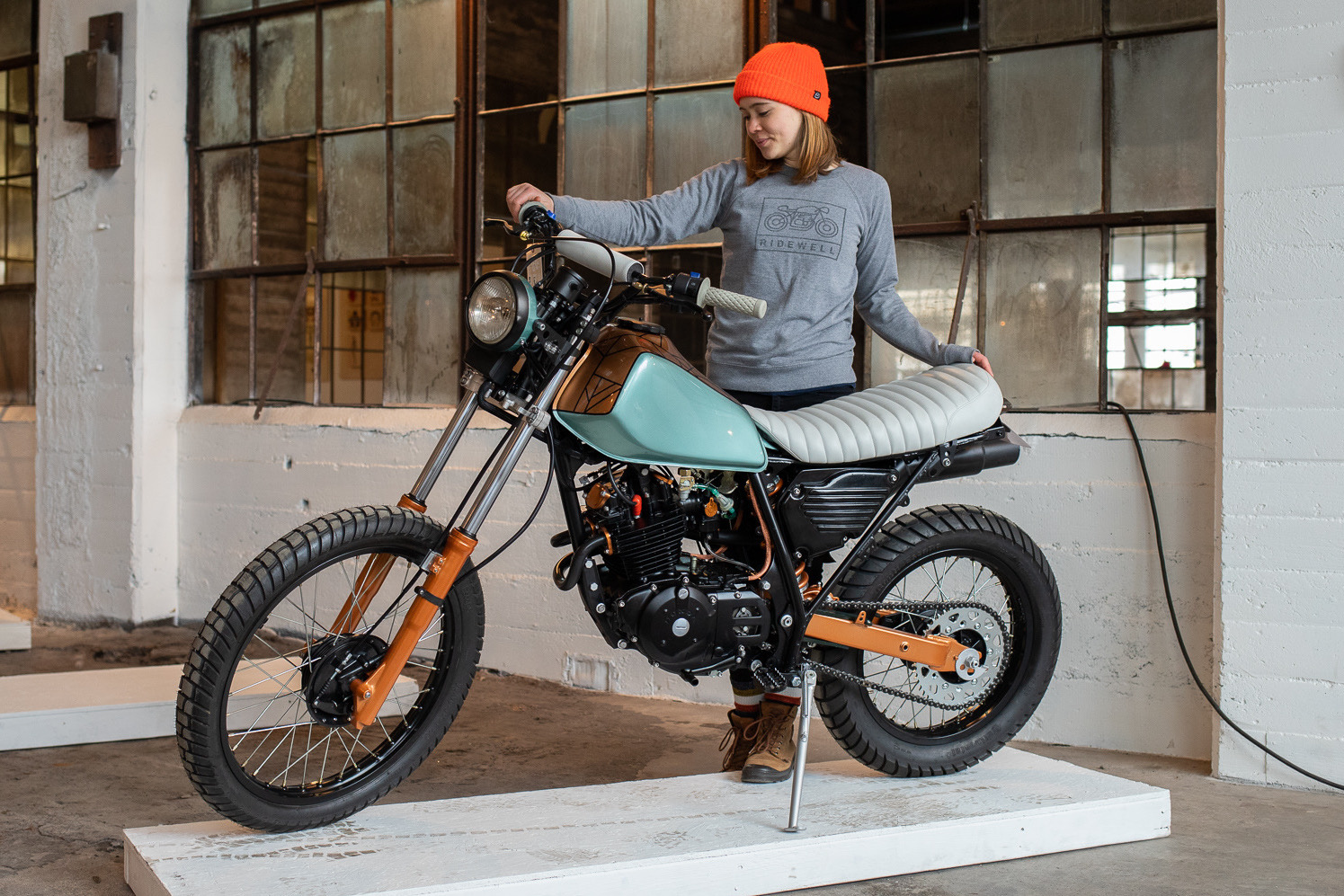 Has it really been a month since the One Moto?

Despite the weeks, it’s hard not to feel like I left a part of myself behind in the drafty, motorcycle-filled Pickle Factory.

True to form, the ten-year anniversary show was a motorcycle mecca. Every kind of bike was represented, from choppers to cafe racers to mini-bikes (so many mini-bikes!). There were restorations and category-defying customs, rusty old Harleys and shiny new electric concepts.

And I was very much humbled that, by the windows in the middle room upstairs, there was a blue-and-copper XL250 from my very own garage.

When I published my last update, it was a week before the show. My newly painted tank was in transit from Sofi in Texas, due to arrive the next day.

That night, I slept horribly. I tossed and turned, imagining worst case scenarios. The tank would get dented. The paint wouldn’t have had enough time to cure and would get smudged.

When I finally did sleep, my subconscious dreamed up more creative disasters, including one where my completed motorcycle resembled a child’s drawing of a horse and buggy. Still have no idea what that was about.

Thankfully, none of my fears came true. The tank arrived the next day, and it was beautiful. When I lifted it from the box and set it on the frame, I swear it glowed. With its luminous sea-foam blue and modern geometric design, it tied the build together better than I imagined.

But it wasn’t ready for the show yet. I still had parts to powdercoat, plastics to polish, and controls to connect. Not to mention, I had been ignoring the rat’s nest of cables at the headlight for weeks.

Now, though, I had everything I needed to get it ready for the show, if not quite ready to ride. The countdown was on.

I get by with a little help

The next day, I spent the afternoon at my friend Rebecca’s, powdercoating and polishing. It was Saturday, six days before the show, and while things weren’t dire yet, there was still a sense of urgency.

The powdercoating went well; we were getting pretty good with Prismatic’s Black Jack. The plastic polishing, however, proved to be a total pain.

Weeks ago, I had taken a heat gun and some 220-grit sandpaper to the black plastic airbox cover to remove a few deep scrapes. I got the scrapes out, but left a deep sanding grain in hard-to-reach places. Oops.

Rebecca and her boyfriend Cory came to my rescue, and took turns wet sanding and polishing for hours. And when it got late, and they were still polishing, they offered to work on it over the next few days so I could take care of other things.

For two years, this project has been, intentionally, a solo pursuit. But it was heartwarming and encouraging to have the support of friends so close to my deadline. I felt humbled, and grateful.

Rebecca and Cory did a phenomenal job with the side cover — it looks almost new. They are working on their own project motorcycles, so I hope someday I can return the favor. But for now, all I can say is thank you.

Anything that can go wrong…

I wish I could say it was smooth sailing from then on, but this is a motorcycle project: things never go quite as planned.

On Monday, while reassembling the throttle, I realized the carburetor was sticking. Despite the thick return spring, the throttle wheel stuck in the same spot every time.

I panicked. Off came the seat, the airbox, the carburetor.

Around eleven that night, I discovered the problem. In my quick reassembly of the carburetor after painting, I misaligned the slide needle, which caused it to catch on its way down. Fortunately, a bit of sandpaper and a more careful reassembly fixed the problem.

But the next day, I discovered my throttle problem hadn’t only been in the carburetor: the return cable was sticking in the housing, too. I couldn’t figure out what was wrong, and was only getting frustrated.

Instead, I prioritized and wrangled the headlight cables. After all, no one at the show would care if my throttle stuck a bit, but a rat’s nest of cables at the headlight would definitely get noticed.

Two days before the show, I considered trying to start the bike for the first time. As I did the final checks, though, I found that not only had I adjusted the valves to the wrong spec, but my handmade clutch cable holder was too short.

I spent the evening readjusting the valves and tinkering with the clutch, even removing the side cover to check the lever. But the conclusion was clear: after the show, I’d have to make yet another cable holder.

On Thursday, the day before the show, I decided it was time to stop messing with it. Instead, I spent the evening detailing. I removed every speck of dust and went over the engine with touch-up paint. If it wasn’t running, it was at least going to be clean.

The next morning, the first day of the show, J and I woke up at 6 AM so we could beat the load-in crowd. The show was on.

The show itself was a blur of hugs, conversations, photos, and many introductions I’ll never remember them all. As usual, Thor and his team delivered a deliciously diverse group of machines from hardworking craftspeople.

I was absolutely honored to be included among so many amazing motorcycles. But there was one aspect of being in the show that I didn’t expect.

In the weeks before the show, I was drowning in the details of my build. I worried I’d be ostracized at the show for my amateurish brackets, my stock exhaust. I was sure that surrounded by so many beautiful bikes, nobody would look twice at my little XL.

But none of that happened.

Instead, I found myself embraced by the community. People who followed my build from the beginning sought me out and exclaimed over the results. Passerby smiled at my build, and took pictures. I was interviewed three times, and I gave out all my stickers.

The support was overwhelming, it was humbling. But more important, it gave me something I desperately needed: to see my project through someone else’s eyes.

Before the show, while I was mired in anxieties, my husband teasingly asked me a very good question: “Why can’t you just be proud of yourself?”

I didn’t have a good answer at the time. But now, I realize it was because when I looked at my XL, I saw all my mistakes. I saw what wasn’t done, what I had done wrong.

Wrapping up the details

Of course, this isn’t the end of the road for the XL250. Even though it’s been a month since the show, I still have to finish the new clutch cable bracket, sort out the choke and throttle, wire in a horn, deal with a small oil leak, and actually try to start the damn thing.

But I’m going to put it on pause for now, because J and I are buying a house! And the good thing about motorcycle projects is that, when life gets in the way, they’ll still be on the other side waiting for you.

I can’t wait to get settled in my new garage (two-car, oversized, fully finished, with a window!) to sort out the last details of this build.

Until then, thank you for following my journey. The support of my readers has meant the world to me 🙂