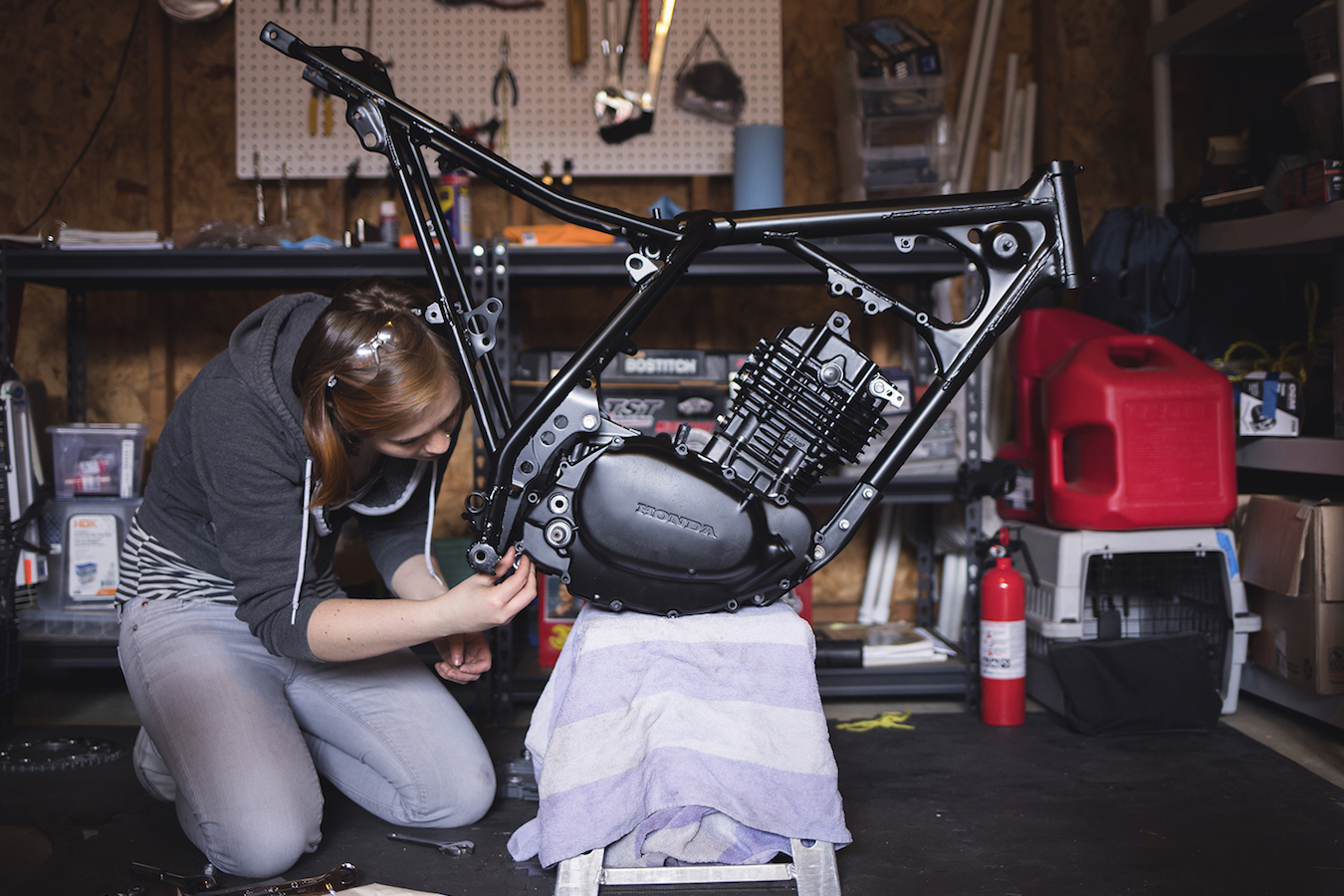 It was a cumbersome job that required four hands, preferably more. J held the frame’s front end, while I gingerly eased the back into its snug fit against the engine. Paint scraped, I grimaced.

Everything was smooth, jet black, and unyielding. Breath held, we inched our way down until the mounting points aligned, engine and frame.

After fumbling the bolts into place, I stepped back. The effect of our alchemy was undeniable: a fourth motorcycle had just taken shape in the garage.

The bike had been there all along, of course: wheels on our castoff sofa, engine on my workbench, frame resting on the floor. But now, with these two crucial pieces reassembled, reunited, and repainted, I could see the outline of the motorcycle it would become.

It reminds me of how, in the throes of metamorphosis, a caterpillar digests its own body to fuel its reincarnation. Step by step, I’ve digested this bike, reducing it to piles of nuts and bolts and bits, and now I’m watching something new emerge, something more than the sum of these parts.

At its most basic, emergence is a reveal, a birth. But the word is also used in the term “emergent property,” meaning a property that arises from a system, a property that none of the underlying pieces share.

You might say that self-propelled motion is an emergent property of a motorcycle, because none of the underlying pieces, or even the unique systems they comprise, have that ability alone. It’s only by working together that they create the phenomenon of movement.

Emergence has been on my mind lately, because working on this motorcycle feels disjointed in a way that makes the prospect of a complete, running motorcycle feel improbable.

Each task seems isolated: scouring old hardware, repainting the engine, reassembling the brakes, rebuilding the monoshock and front suspension. As I’m working on each step, I’m only focused on the task at hand. It’s easy to forget how each builds on the next.

Beyond the motorcycle emerging in my garage, I have also been surprised by new emergences in myself. Intuitions and feelings I’ve never had before have begun to surface, giving me hope that I am, after all, learning something.

One day, as I was rebuilding the top end, I decided to reinstall the camshaft chain tensioner. This particular piece had been problematic for me already: months before, I stripped the threads on my original tensioner and had to buy a hard-to-find replacement. So I was on edge.

As I was tightening the tensioner’s main mounting bolt to the spec torque of 16 ft/lbs, I started to feel that something was wrong. I was turning and turning the wrench, and I could feel that I had been turning it too long. I had felt 16 foot/lbs before, this wasn’t that. The moment I began wondering if I should stop — snap. The bolt broke off flush, buried in the crankcase.

A broken bolt is never a good day, but I wasn’t too upset about it. I had dealt with broken bolts before, I knew it would come out one way or another. And the culprit, a dysfunctional torque wrench, was under warranty.

I was more interested in the flash of premonition I’d felt the moment before it snapped. This was new to me. I had known, before it happened, that the bolt was getting too tight.

It’s a simple thing, but for me it was an emergence.

Here’s another example. After the cylinder head was securely reinstalled, I discovered I couldn’t find my decompressor lever. This was a problem, because it needed to be installed before I could put the cylinder head cover back on — the final piece in my top-end rebuild.

I looked everywhere: the box of engine parts, the box of frame parts, the wheels and brakes box, the boxes of old plastic fairings. I couldn’t imagine where it had gone. I was prepared to conduct a full-scale search when something caught my eye in my pile of Cerakote’d bolts and washers: the lever.

The decompressor lever is not really a part you’d want to paint, even with such a thin coating as Cerakote. The lever fits precisely into the cylinder head cover, with little room to spare. I know this now, not because I looked it up specifically, or asked anyone, but because I’ve already had a few lessons in tolerance, and I know it’s more important in some places than others.

I can’t remember what I was thinking when I put that lever in my Cerakote pile. But now, eight months later, I know I would have thought twice before sending this part to be painted.

My new instincts proved correct: the decompressor lever, now finished in matte silver Cerakote, was a catastrophically bad fit. It had to be pounded into place, and once in place, it didn’t rotate at all.

Fortunately, the Cerakote wasn’t hard to remove. With a bit of time under some 180 grit sandpaper, everything fit and rotated smoothly again.

These instincts are small, and of course they are not always perfect. I still have to watch myself, remind myself to be thorough.

But finding them there, however small and imperfect, means the world to me. They prove to me that the hours I’ve spent immersed in the garage, in the manuals, in the online parts catalogs are, in fact, adding up to something. That I don’t have to be a mechanical genius to work on motorcycles. That I can, in fact, learn to do this.

It’s miraculous, too, because I feel like all I’ve done is put in the time. Somehow, from all these disparate, isolated work sessions in the garage, a new understanding has begun to emerge. And a new motorcycle.

In the garage, I am in flux. I’m not quite a mechanic or a builder, but not a complete novice any longer, either. We share this chrysalis, the motorcycle and I. Through a process as old as human innovation, we are recreating ourselves, together.