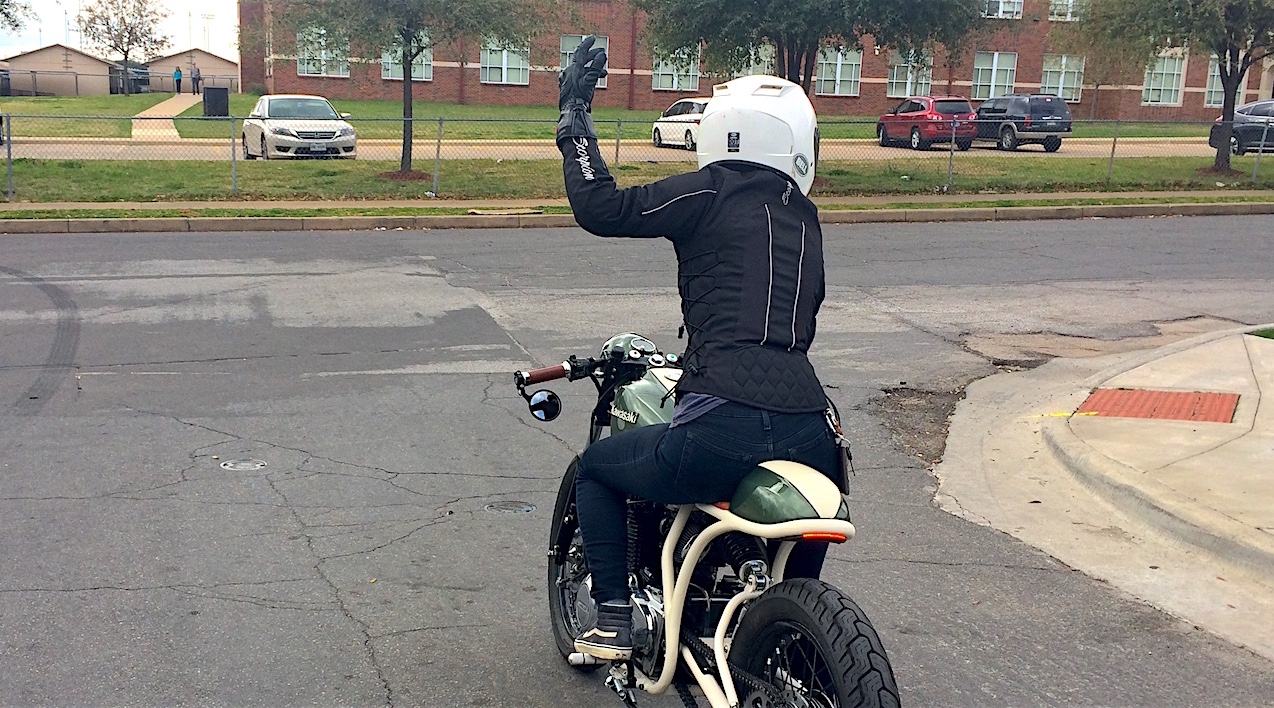 Today, I’d like to talk about hand signals. Yes, I know it sounds simple, possibly remedial, but you guys, I think hand signals are awesome. And I feel like we don’t often take the time to appreciate them, use them — or even learn some of the more obscure ones.

So, I just wanted to take a minute to tell you why I love them so much, and why I’m taking time out of my day to write this little blog post about them.

Most of the bikes I’ve ridden in the past year haven’t been mine. My friend’s Sportster and Honda Shadow, my boyfriend’s CBR, that rented Fat Boy… and each of those bikes has been a different experience. The Fat Boy had shift assist (no, I’m not letting that go any time soon), the Sportster had a turn signal on each side of the handle bars, and the CBR had an insanely tight clutch.

With each new bike, I had to re-train my muscle memory to a new friction zone, to a new brake sensitivity, to a new way of handling. And even if I had time to ride around a parking lot or neighborhood to get used to it, when I get out on the road it still takes some focus. Which is totally normal, but when I’m riding, I want to minimize distractions as much as possible. So, when I’m out on a new bike, I don’t even try to mess with the turn signals. For at least the first 10 miles.

After all, I know exactly where my left arm is, and I can use it for the exact same purpose. Why should I add another distraction to my new-bike experience? Hand signals FTW.

This is totally just a theory, but considering there isn’t much research on the subject right now, I’m going to go ahead and throw it out there.

Imagine you’re a distracted driver. You’re headed home on your daily commute, brake lights flashing on and off in stop-and-go traffic. You’re fiddling with the radio and wondering if your latest Instagram photo got any more likes.

Which of these things are you more likely to notice: a blinking turn signal, or a flailing human hand?

Okay, yes, just a theory. But think about it — if you (as a rider) want to make sure those distracted drivers notice you, behave abnormally!

Whenever I feel like the drivers around me aren’t paying as much attention to me as they should, I definitely use BOTH my turn signal and my hand signs. I might even swerve around (safely, very controlled) in my lane a little. Just something that will make people recognize that I’m there and that I’m NOT A CAR.

Reason #3: They’re cheaper and more reliable than a fancy bluetooth.

When you’re riding with others, it’s exceedingly important that you communicate with each other — not only do you have to look out for your own safety, but you have to do your best to ensure that your behavior isn’t putting any of your fellow riders in danger.

Speed changes are one of the most tricky aspects of good group riding, due to something called the “rubber band” effect. The rubber band effect (also known as the accordion effect) is what happens when groups of riders attempt to speed up or slow down in unison.

To illustrate, let’s say you have a group of 5 motorcyclists riding together at 55 mph. The first rider increases her speed 5 mph, from 55 to 60. The second rider will take at least a second or two to react to the first rider’s speed change, so he’ll have to speed up to 62 or so to catch up with her and keep his place in the group.

Then, the third rider will realize that they’ve both sped up, and she needs to catch up to the second rider who has already gone 2 mph faster than the first rider so she has to go 65, and then the fourth rider has to catch up…. you see where I’m going with this.

By the time it’s the fifth person’s turn to catch up, she may have to go 70 mph to make up for that little 5 mph speed increase!

So, how do you fix that? Hand signals, of course! (That’s what this post is about, after all 😉 )

If the first rider signals to the other riders that they’re about to speed up, that will allow each of the riders to be better prepared to accommodate the speed changes much more quickly, thus keeping the gaps between them to a minimum and eliminating the rubber band effect.

I could go on about how important communication (and by extension, hand signals) is to safe group riding, but I think for today you get the picture 😉

I hope that by this point you understand why I think hand signals deserve a mini nerd-out, and you’re inspired to memorize them and use them on your next ride!

P.S. The cops one really does come in handy 😉