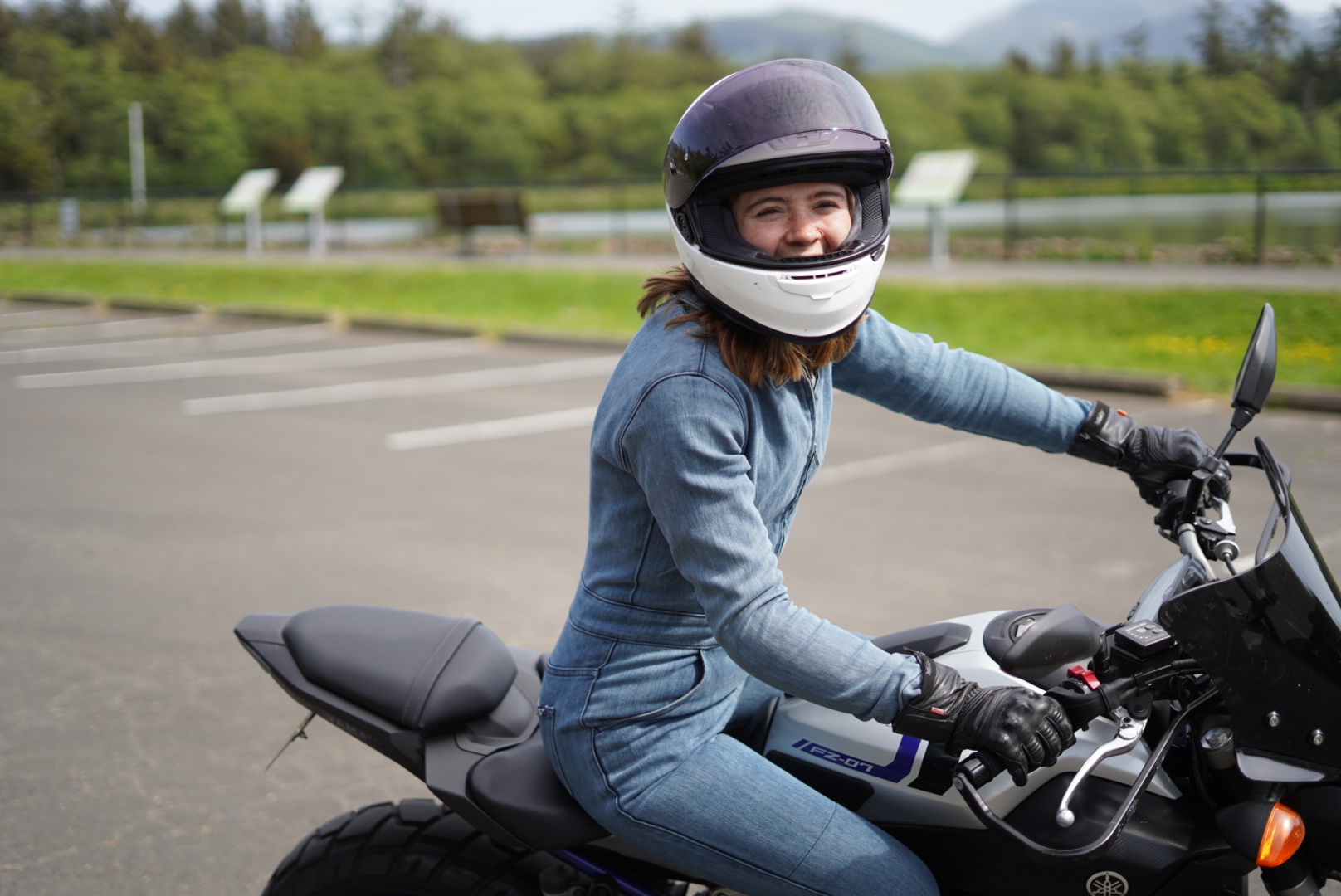 For many new riders, the fundamental concepts of riding a motorcycle feel counterintuitive — and sometimes downright scary.

One that gave me trouble early on was speed equals stability. Even though I understood the logic, it didn’t quite click.

During my beginner course, when I felt unsteady or overwhelmed, my mind screamed slow down! But that was the wrong answer. Slowing down just made me more unstable, which made my panic worse.

It wasn’t until much later that it sunk in: If I’m going too slow, I will feel unstable.

In my first two seasons teaching motorcycle classes, I’ve seen many moments where new riders can repeat the words of a concept — look all the way through a turn, or press left, go left — but have a hard time putting it into practice.

It’s as if there’s a deeper learning — a physical or emotional learning — that has to happen alongside the rational understanding.

Getting to that place of deep learning requires a leap of faith, a conscious decision to give it a shot, despite the voice in your head screaming “This doesn’t make sense! It won’t work!”

It requires letting go of your ego and fear. It’s not easy work, but when you’re able to step back and trust the technique, the results can be so very rewarding.

This summer, I had my own experience with this humbling process.

Those of you who have read my blog for awhile will remember that, when J and I moved to Portland three years ago, I was scared to death of its winding roads.

Skyline road, in particular, kicked my ass the first time I rode it. It made me realize that I had never really learned to corner while riding in Dallas.

At first, I thought it was fear that kept me from cornering better. I tried going faster and pushing myself to lean more. It helped some, but didn’t do much to improve my overall confidence.

Then, I began training to be an instructor, and I rediscovered basic cornering technique: slow, look, and roll. I’m sure I learned it in my first motorcycle class, but — like so many new riders — I was overwhelmed, and it didn’t really sink in.

While practicing for the instructor test, however, I began to put basic cornering skills into practice — on every single corner.

It became clear to me that even though I had been riding for years, and I kind of knew how to corner, I needed to go back to the basics, and re-learn that fundamental technique to fill in the gaps.

Soon, corners because easier to control, and I was able to keep up with faster riders without panicking.

Then, this summer, I had the opportunity to join an advanced cornering clinic on a GoKart track with other Team Oregon instructors, and it all started coming together.

Out on the GoKart track, pulling tighter and more complex corners than ever before, I started to build some confidence.

But, the most amazing thing was the realization that when I picked my line, turned my head, and slowed early enough to roll on the throttle throughout the turn, the corner seemed to take care of itself.

Who knew? The technique worked.

Of course, I still have room to improve. My timing wasn’t perfect, and sometimes I cut corners a bit too hard.

But the next time J and I took our bikes down Skyline, it felt fun and relaxing for the first time ever, and I realized how much I had grown.

Learning to let go and trust the technique is a humbling, difficult process. But it’s part of what makes the journey of motorcycling so rich and worthwhile.

To become a better rider, you often have to step outside of your comfort zone — and sometimes that means admitting to yourself that you don’t know something, or you were doing something wrong.

It takes courage to be vulnerable in this way, and it doesn’t always feel good. But ultimately, it helps us grow — as motorcyclists and as people.

No matter where you are in your riding journey, you’re a new or experienced rider, I encourage you to trust the technique. You might be surprised by what you learn.