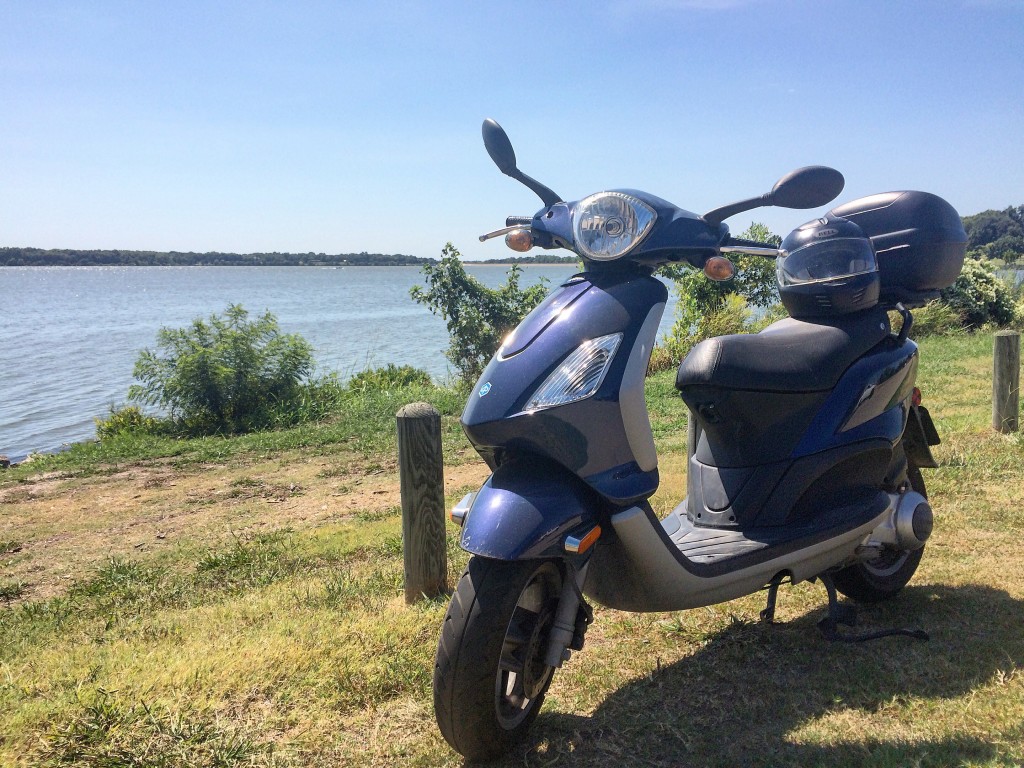 If you ask riders about how they got into riding, a lot of them will tell you that it started at an early age. My boyfriend knew since he was six. And that’s awesome. When he was able to buy his first bike, he took the safety course and (carefully) hit the road.

But some people (like me), might just now have realized they want to ride, and might be nervous about immediately hopping on a motorcycle. I mean, I’d never driven a manual car, and I didn’t even have much practice riding a bicycle. I worried that I was too uncoordinated to ride a motorcycle, that I’d end up hurting myself. But after I took the safety course, I knew one thing — I wanted to ride. So I got a scooter.

I think scooters have gotten a bit of a bad reputation. Before I bought my own, I kind of looked down on them — which I’m kind of ashamed of now. Because, to tell you the truth, scooters are FUN. They’re easy, many of them can actually go pretty fast (my Piaggio 150 tops out around 60), and they have STORAGE. I can’t tell you how many times J has asked me to carry something in my seat 😉

Scooters are awesome, and if you’re anything like I was— wanting to ride but not really sure where to start — I think you should get one. Here’s why.

It’s easier to learn to balance.
For me, one of the hardest things about learning to ride a motorcycle was getting comfortable with its weight. I dropped the safety course bike several times simply because I didn’t know how to balance it as I came to a stop. Because my scooter is so much lighter, however, it was much easier for me to get comfortable balancing (and occasionally manhandling) my scooter to keep it upright.

After becoming comfortable with the feel of a heavy two-wheeled vehicle, I soon realized that I could handle MUCH larger bikes. For instance, I’ve ridden my friend’s 1200cc HD Forty-Eight without any issues (except when I hit a hole in the road during a turn, oops haha). My point is that it’s not so much an issue of strength as it is balance, so if you’re short-ish (like me) or you don’t have a whole lot of body strength (also like me), it might be good to start out with something lighter. I only dropped my scooter once the entire first year I had it!

There’s less to distract you from learning to navigate traffic.
The first time you get out on the road on two wheels, it can be pretty intimidating. Especially here in Texas, where there are trucks, suburbans and 18-wheelers whizzing by, even on back roads. When you’re riding a bike, you have to be MUCH more vigilant in traffic, and you have to learn to drive more defensively, so the fewer distractions you have, the better.

During my year on my scooter, I was able to learn what kinds of car behavior or situations to watch for, and how to react, so by the time I got on my first motorcycle, riding in traffic was much less stressful. After 45 minutes of riding around a parking lot, I was able to take the bike on the road with no problems.

It’s cheaper.
A scooter was not my first choice. After I took the safety course, I wanted a motorcycle. But I quickly learned that the bikes I thought were beautiful were not good beginner bikes, and frankly, I wasn’t interested in paying $3500 for a Honda Rebel that I would want to shuffle off in four months. When I realized I could get a great scooter for less than half that, I was sold. I found my Piaggio on Craigslist and snapped it up for a cool $1200.

Just a word of advice — don’t be swayed by those über-cheap 50cc mopeds. You can get them for less than a grand, even brand new, but it’s not worth it. Most of those 50cc mopeds get up to 40 mph — if you’re lucky. Because I got a 150, I could keep up on faster suburban roads, and I could quickly get away from dangerous situations. Spend the extra money — it’ll be worth it.

They get great gas mileage.
Many people think motorcycles get great gas mileage, and that’s really only partly true. From what I’ve heard/read/experienced, most bikes over 400cc get about 45-55 MPG, and while that’s not bad, you could get similar fuel efficiency (or better) with a hybrid car.

For 2015, the motorcycle with the best MPG was the Honda Grom, which tops out at 50 MPH, at 103.5 MPG. The best scooter was the Genuine Stella Automatic, which gets an impressive 140 MPG, and probably tops out around 50 MPH as well. Personally, I estimate that my Fly gets about 70 MPG, and I’ve pushed it to about 60 MPH.

SIDEBAR ALERT
Also, if you’re switching to a motorcycle because you think they’re more environmentally friendly… well, unfortunately that’s not quite true. Yes, they do use less gas, and they do produce less CO2 as a result, but bikes are not held to nearly the same emissions standards as cars. In a 2011 episode, the Mythbusters did some testing and found that bikes produced 416% more hydrocarbons, 3,220% more oxides of nitrogen and 8,065% more carbon monoxide than cars. RideApart attempted to tear that claim down with some valid-ish arguments, but in my opinion the issue still stands: we need better emissions standards for motorcycles.
END SIDEBAR

Anywayssssss… what we’re we talking about? Oh, right, scooters 🙂

They’re a hell of a lot of fun.
If you want to learn to ride, chances are you’re not dreaming of struggling to downshift at 15 mph, or learning firsthand why gravel is a rider’s worst enemy. You want to ride because you want to fly effortlessly through traffic and feel the wind in your (helmeted) hair. With a motorcycle, it’s going to take you awhile to get there. With a scooter, you’ll get there faster and more safely, and you’ll be that much better on a bike when you’re ready.

And nothing compares to getting up to 50 mph with a twist of the throttle, or beating your boyfriend off a full stop because he was in neutral (hehe).

So, before spending a bunch of money on a good “beginner” bike that you don’t really like, try a scooter. Who knows? Once you buy a motorcycle, you might just decide to keep the scooter too 🙂

Whatever you decide to do, just remember that your first bike isn’t meant to be your last. Learning to ride a motorcycle isn’t something you do in just a few weeks or months. The only way to do it is through experience. So don’t worry about pushing your comfort zone right away. The more you ride, the more your comfort zone will expand, and you’ll be on the Ducati of your dreams before you know it. Just relax and enjoy the ride.

Want more advice on shopping for your first two-wheeled fun mobile? Here’s what I wish someone had told me. 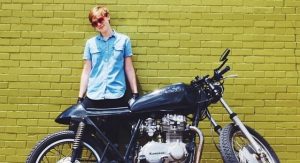 5 Things I Wish I Knew Before Buying my First Motorcycle