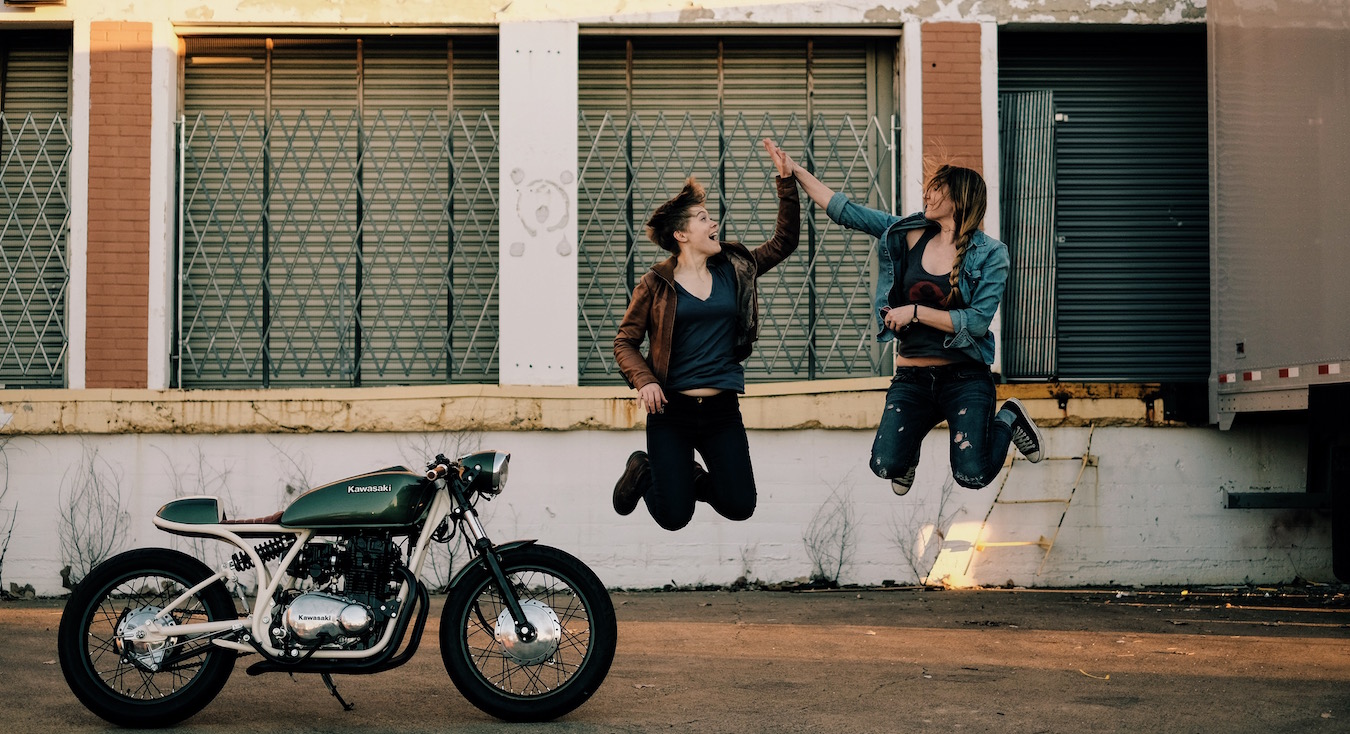 Today is International Female Ride Day. It’s a day that’s very dear to my heart, because not only is it a day to celebrate badass women riders worldwide, it’s also the anniversary of the day I bought the Little Rat.

This time last year, I was zooming around with no speedometer, no blinkers, a crappy ass plastic seat, and a choke that wouldn’t stay closed. And I was so full of adrenaline I couldn’t ride much longer than 20 minutes without needing take a break. But I kept getting back on.

At the time, I didn’t know any other women who rode motorcycles. I didn’t realize that the women’s motorcycle community was on the verge of exploding — I didn’t even know there was one.

Then, when I realized I was going to need some help whipping the Little Rat into shape, I was introduced to Sofi. And from the day I met her, Sofi has been one of the kindest, most generous, most badass people I’ve ever met.

Then, while Sofi was working on the Rat, I met my first moto-friend, Crystal, a kickass Harley rider who persuaded me to join her at Babes Ride Out, and that was my first real introduction to the international community of women who ride motorcycles.

Since Babes Ride Out, I’ve met and read about so many women who ride who are doing amazing things.

Women’s motorcycle groups have popped up all over. Babes Ride Out has expanded to two (two!) continents. A handful of female-run women’s gear labels have emerged, and it makes me so proud to see that they make it a priority to create gear that is both protective AND fashionable.

My friends, this is a beautiful time to be a female rider.

One of my favorites things about the women’s motorcycle community is that, unlike a lot of other groups, women who ride aren’t afraid to be different. And not just different from “other people,” either, but different from each other.

The point is, it doesn’t matter how you like to enjoy bikes. If you’re a women who loves two wheels (or three!), you’re welcome to join the sisterhood of things that go braaap.

But as with any awesome community, the people are what makes this community absolutely stellar.

These women are, by and large, what many would call “strong” women — women who keep going when things get tough, women who aren’t afraid of grimy hands and dirty fingernails, women who might not always look their best, but will bring their best to everything they do.

These women are confident that they have a place in this world, and they don’t have to prove that to you or anyone else.

I really think riding itself has something to do with that.

So many women, worldwide, struggle with insecurity. They’re unsure if their clothes are right, suspicious of their partners, jealous of their successful friends, hateful of their own bodies.

Learning to ride, at least for me, has changed my perspective. Learning to ride has given me the confidence and sureness of self that has helped heal many of my own insecurities — the biggest of which was my struggle with body image: learning to ride shifted me from scrutinizing what my body looks like, to reveling in the amazing things my body can DO.

I think many women have found that doing something they may never have imagined, that caring for and customizing a bucket of bolts all on their own, that getting out of daily life on two wheels, just you against the world — all of this has changed how they think about themselves, how they think about the world, and, therefore, changed who they are.

Women who ride have made a huge ripple in the motorcycle community lately. We’re making manufacturers scramble to get more women’s gear on the showroom floor, and making rental companies think twice about the number of Bonnevilles they have on the fleet.

But I think what we’re doing is more important than that. Women who ride aren’t just transforming the motorcycle community, we’re redefining what it means to be female.

Thank you, ladies, for being you. Go have fun today, you deserve it.