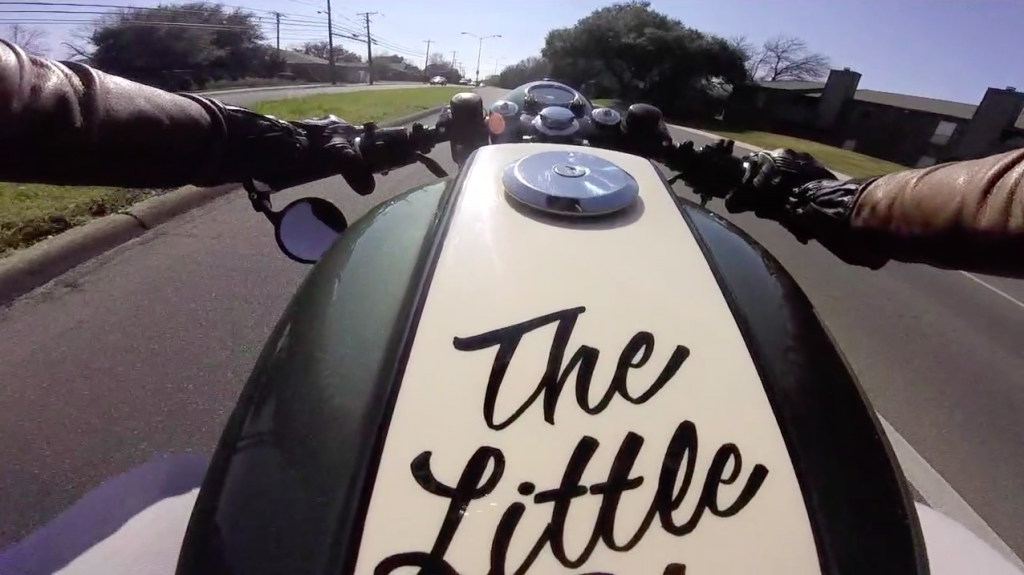 Heavy traffic is nearly unavoiadable for any urban or suburban motorcyclist. But it’s also one of the most dangerous places for a rider to be. In a 2005 study of fatal motorcycle crashes, 60% of two-vehicle crashes occurred on urban roadways (NHTSA). So, it’s important that you, as a rider, develop special skills for staying safe in traffic.

In the three years I’ve been riding, I’ve never known anything but city traffic. I rode my scooter straight through the middle of downtown Dallas every morning and evening for a year. And I still ride the Little Rat primarily on city streets ⎯ though I’m lucky enough to work from home now, so I can avoid being on the road during rush hour.

From my experience living in a city where the average person spends 58 hours in traffic each year, and talking to others who also live in the area, I’ve come up with five strategies for staying safe on the road that I rely on every time I put my key in the ignition.

In heavy traffic, visibility is your top priority, and it’s not easy. Accidents caused by a driver are most likely to happen because the driver fails to yield the right-of-way (NTHSA). Which, most likely, means they didn’t see you.

For example, if you’re riding in the left lane on a street with two-way traffic, your instinct may to stay as far away from oncoming traffic as possible, in the right track of your lane. This is a great instinct, unless you’re behind several cars. In which case, the cars in front of you might block you from the sight of oncoming traffic.

See what I mean?

According to the NTHSA’s 2013 Traffic Safety fact sheet, 42% of fatal motorcycle accidents happened when a car turned left in front of a bike going straight. So, learn to stay within view of oncoming traffic. If you can’t see them, they can’t see you.

Keep out of harm’s way

Another one of my absolutely crucial strategies for city riding is to stay the hell out of the way. For me, this means two things: don’t ride alongside another vehicle if you don’t absolutely have to, and don’t dawdle through intersections.

Often on city streets, or even on the highway, I find myself keeping pace with a car on one side of me. That is the wrong place to be. That car might change lanes, and not see you, for example. But I’m actually more concerned about road hazards. Someone who swerves to avoid small animals, potholes or debris is much less likely to check to see if the lane they’re swerving into is free.

If you have to be alongside a vehicle, try to be as far towards the front of the car as you can. That way, you’re already in their direct line of sight if anything should happen.

Also, intersections. They’re bad news bears for riders. According to the NHTSA, roughly half of fatal, two-vehicle motorcycle accidents occur at intersections. At intersections, I try not to dawdle. Upshift as fast as possible and don’t spend any more time than necessary between the lights.

And if you’re at an intersection that just changed from red to green, try not to be the first vehicle through it. Too many people run red lights in the city, and it’s much better for another car to get slammed than you. Remember, in two-vehicle fatal crashes between cars and motorcycles, 90% of the time it’s the rider who dies.

When you’re on the highway, there isn’t a whole lot to distract you. Obnoxious billboards, maybe, but not much else.

That’s why a rider needs to have a shrewd, razor-sharp filter. You must be able to quickly determine which situations might be a threat, and which have no bearing on your survival whatsoever.

Here’s an example: the other day, my rearview mirror came loose while I was in traffic. It started flapping wildly in the wind, and I freaked out, thinking I was about to lose it. I was about to try to reach out to hold it on when I realized, so what if it falls off? I’ll buy a new one.

Luckily, I didn’t lose the mirror 😉

When you’re riding in heavy traffic, there are usually about four drivers that have the immediate capacity to kill you. Think about that for a second. Yeah, it’s heavy.

That’s why you have to pay attention. Focus. Don’t ever assume that just because a car has been behaving normally that it will continue to do so.

And for the love of god, don’t piss them off. I’m definitely not one to shy away from giving another driver the finger (if they’ve earned it!) but I sure as shit don’t do that when I’m riding. You never know how the driver might react.

And remember, city roads are not the place for speed. Go find a beautiful country road or empty highway for that ⎯ or even better, hit the track. While you’re in the city, there’s too much at risk: in this NTHSA study, speeding was the top motorcyclist-related factor cited for a fatal, two-vehicle accident. Don’t trust that everyone will see you, or stay out of your way. They won’t.

One thing that helps me stay focused on the road is to take in my surroundings and plan what I’d do if something in my environment suddenly becomes a serious problem. Of course, I hope it *doesn’t* happen, but creating and updating plans doesn’t just help you in the moment. Practicing creating a plan makes it easier for your brain to create escape plans in general.

Research has shown that mental rehearsal, the act of thinking through a process without physically doing it, improves your performance when you do the same thing for real. This is excellent news for riders, because we (thankfully) so rarely have to respond to an emergency situation.

So if one day, you’re caught off guard (you should never be, but it does happen), your brain will be better prepared to figure out what you should do and make that split-second maneuver that saves your life.

Thanks for sticking with me, guys! If you’re just learning to ride, I hope these strategies help keep you safe while you’re learning. If you’re an experienced rider, do you have any “rules to ride by” that you use when you’re in heavy traffic? I’d love to hear them.

And remember to ⎯