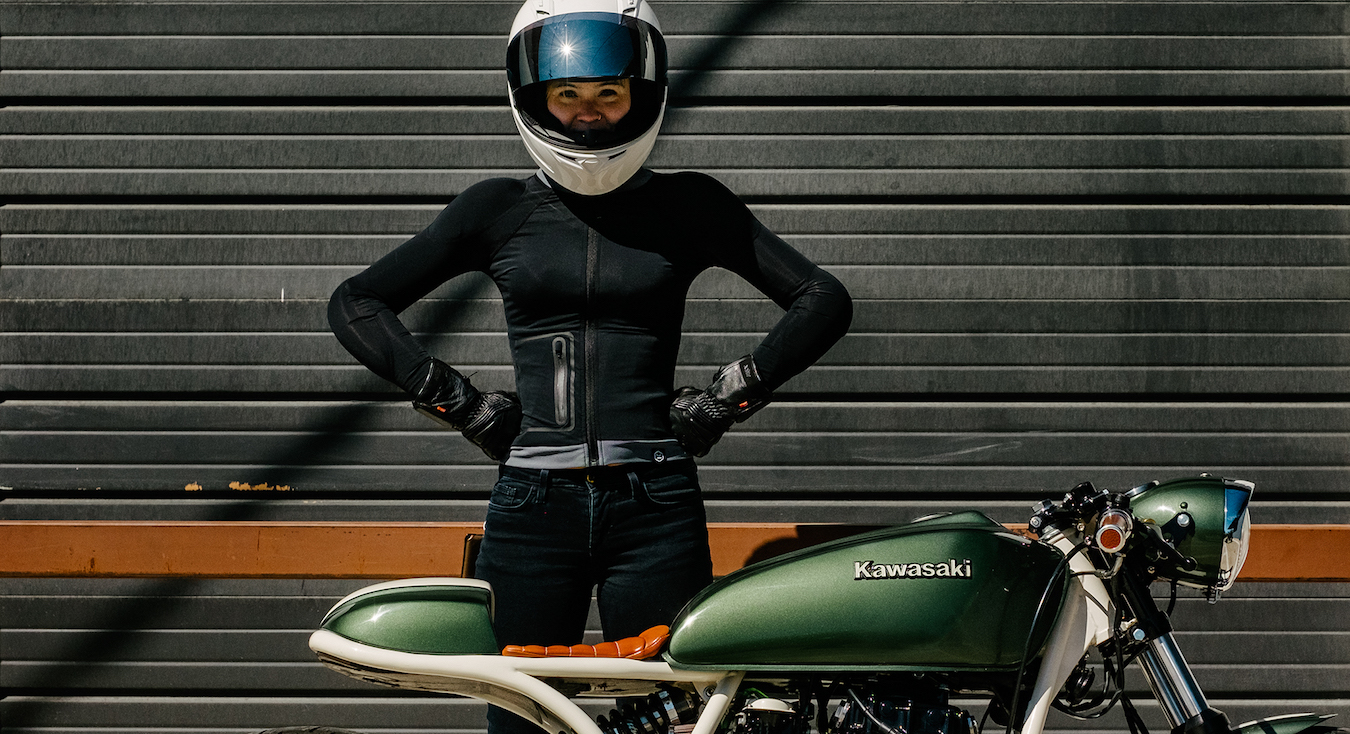 Update August 2018: Since I wrote this article, Knox has launched their updated Action armored shirt with new Micro-Lock armor. Check out my review here, or view it on Revzilla (with free shipping!).

I bought my first armored jacket just a few days after my boyfriend’s accident. I had put it off for a really long time, partly because I didn’t know what to look for, but also because what I had seen didn’t appeal to me. The leather jackets I found were expensive and structured for men, and it was rare to find one with pockets for armor, much less with armor included.

But after J’s accident, I knew it was time to buy SOMETHING, so I went up to Moto Liberty and bought the only mesh jacket in the store that fit me ⎯ the Scorpion Exo Nip/Tuck.

Thankfully the jacket was all black (not pink or too sporty!), and the vents definitely helped in the summer heat, but even then I barely wore it unless I was riding a “legitimate” motorcycle (which was a stupid distinction, but that’s a whole other discussion).

I kept telling myself I would have to get an actual leather armored jacket when winter hit this year… but then it never really did, and somehow I found myself 600 miles into motorcycle ownership with only an armored, mesh jacket and a non-armored leather jacket ⎯ which I really liked, but would hardly protect me in a crash.

But then, after I reviewed my awesome Knox Armour Covert Gloves, the good people at Knox got in touch and offered to send me some gear (with no strings attached, mind you!), and one of the items they sent was this armored shirt (men’s here) ⎯ which has proved to be the most useful, versatile item of gear in my collection.

The armored shirt is kind of like an athletic undershirt that zips up the front, made of stretchy, shinyish fabric, with Knox’s CE-approved armor sewn-in on the shoulders, elbow and back.

And, fortunately, it fits under just about every jacket I own! There are a couple that just don’t have enough space, but it fits perfectly under my favorite leather jacket, which is what I really wanted 😉

It’s worth mentioning that Knox has been in the armor game a long time ⎯ they produced the first commercial back protector and the first summer riding jacket with integrated armor in the 1980s, and then in the 90s they were the first brand to achieve CE certification for their motorcycle body armor. And, to top it off, their MD (managing director, aka CEO) Geoff Travell was one of the original members of the WG9 ⎯ the European group which creates the CE standards.

One of the best things about the armored shirt is that it keeps your armor super close to your body, preventing it from shifting around upon impact during a crash ⎯ which is definitely something you’d expect one of the leading motorcycle armor companies to consider!

After trying on the armored shirt, I realized that even though the body of my Scorpion jacket fits, the arms were too loose. It’s almost like a jacket with armor included would have to be tailor-made to fit you to prevent the armor from sliding, which is most likely why Knox doesn’t offer any jackets with armor included ⎯ only jackets made to work with this shirt.

Beyond the safety aspect, however, the armored shirt solves another one of my problems ⎯ often I’d find myself without an internal or zippered pocket, so I’d end up carrying a backpack with me just for my phone. Not anymore! The armored shirt has its own zippered pocket (on the stomach for girls, and on the chest for men) that perfectly fits my wallet and phone.

Now, the one thing that stops me from wearing this shirt all the time is convenience. After all, it is another thing to put on ⎯ the fabric isn’t abrasion resistant, so it’s not really made to wear by itself. And, if you don’t want to wear it once you get where you’re going, you better have a good size bag or a place to stash it in, because the size and shape of the back protector makes it difficult to carry (UPDATE: Knox just emailed to let me know that the back protector folds in half to better fit into a bag, thanks guys!).

To me, however, that’s a small trade-off for being able to add reliable motorcycle armor to just about any jacket you want. At about $120, it’s not inexpensive, but it’s definitely not as expensive as purchasing a full armored jacket, and it ensures that armor won’t slip around in a crash.

So, if you’ve been having trouble finding an armored jacket that fits you (your body or your style), or if you’re addicted to the feel of riding in a hoodie, I highly recommend picking up one of these shirts. Plus, it makes you look super buff. What’s not to like?

And just to be crystal clear: Knox didn’t ask me to write this review, nor did they pay me. I just think this shirt is innovative and awesome, and I want you guys to know that there are alternatives (possibly more protective ones!) to jackets with built-in armor.

Also, I’m going to be at the Handbuilt show for at least part of the weekend next week, so drop me a line if you’re going to be there and you’d like to say hi! This will be my first year going, and I’m pretty dang excited. Hope to see you there!

As always, remember to ⎯