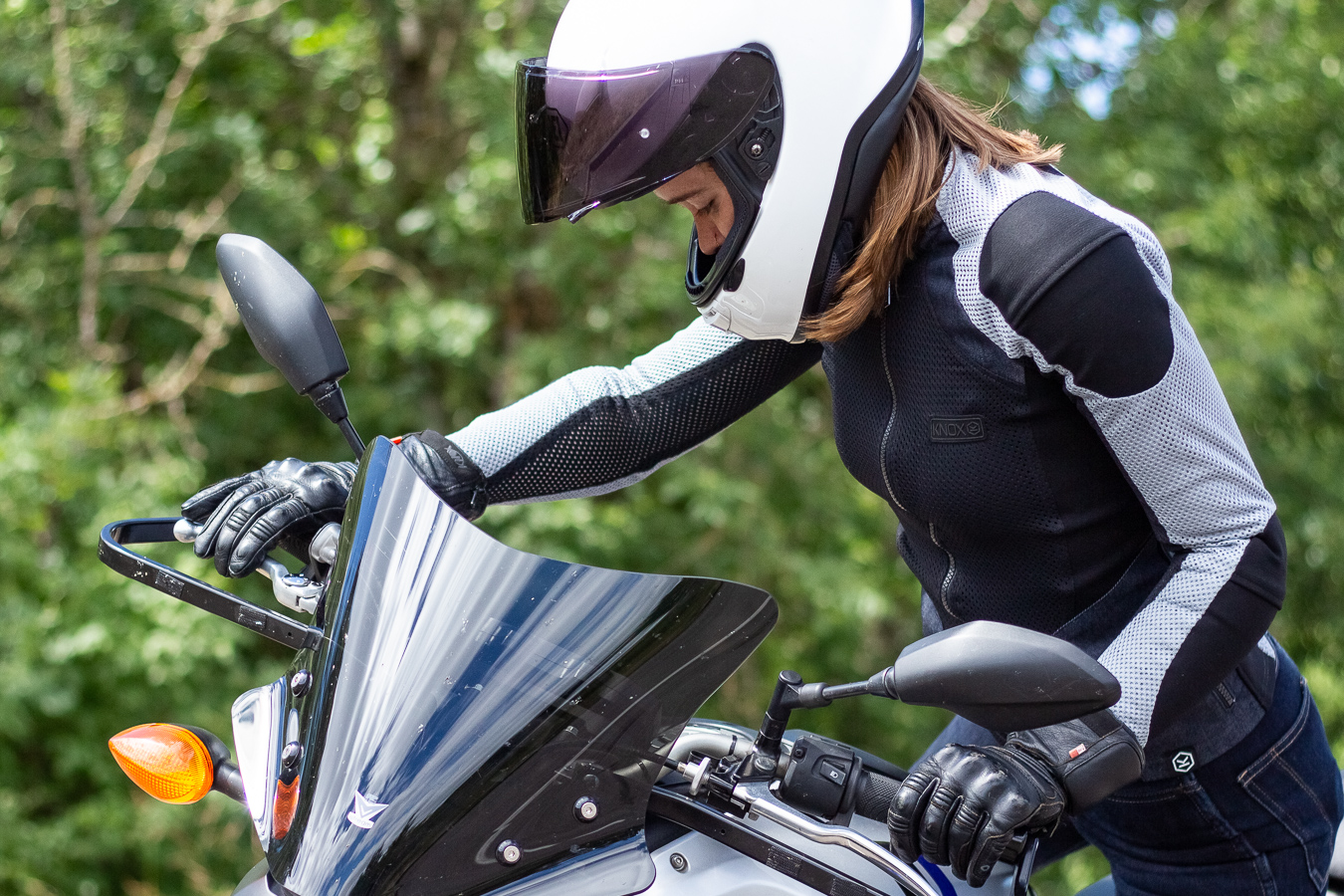 If you’ve read any of my gear reviews, or if you’ve met me on the road, you probably know how much I love armored shirts. These days, I wear one under my jacket almost every time I get on a motorcycle.

But that wasn’t always the case. Three years ago, when Knox Armor asked if I wanted to try their armored shirt, I was skeptical. Did I really want to wear another layer of gear, especially in the Texas heat?

After I put some miles on it though, I was a believer.

Yes, it was another layer. But an armored shirt not only gave me more flexibility in what I wore on (and off) the motorcycle, it was actually safer than typical jackets. Armored shirts keep your armor snug against your skin, which means it’s less likely to move around than if it were in a jacket pocket.

At the time, Knox was the only brand I knew of that made armored shirts. Since then, several independent, women-focused manufacturers like Stellar Moto and Atwyld have caught on, but most major manufacturers haven’t touched them.

In my experience, the problem is cost. When I tell people about the shirt, and they feel the fabric and see it in action, they’re interested.

But when they realize it can’t be worn on its own, and that it’s almost the price of a cheap mesh jacket, they tune out. I get it — if Knox hadn’t sent me that first armored shirt, I probably never would have tried one, either.

It seems that Knox has gotten the same feedback, because this year they launched their first abrasion-resistant armored shirt: The Urbane Pro.

The Urbane Pro is a sleek, stylish mesh armored shirt that can be worn as a base protective layer or on its own as a mesh jacket. And, as far as I can tell, it’s the only one like it on the market. 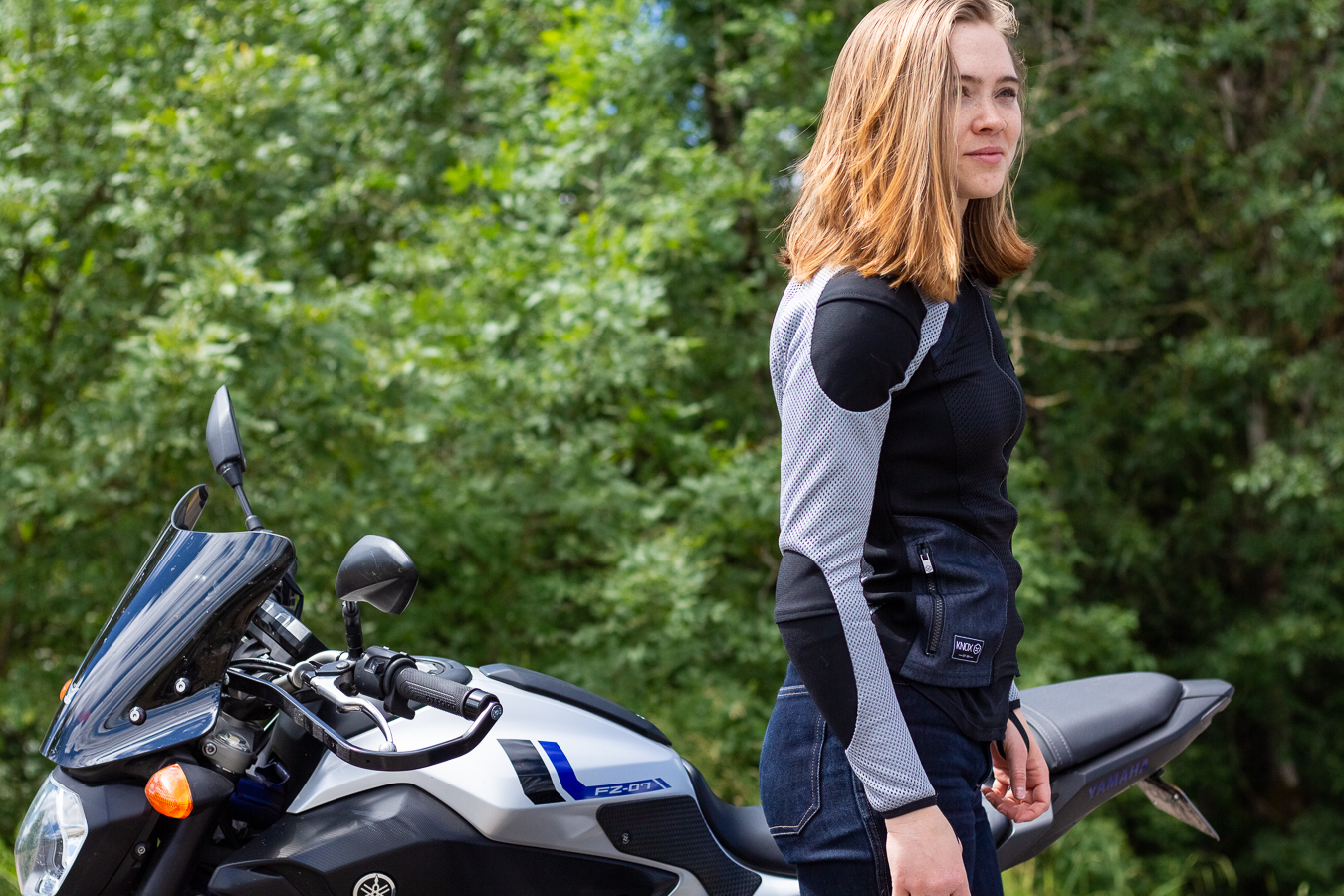 It comes with Knox’s CE Level 1 Micro-Lock armor in the elbows, shoulders, and back (P.S. this armor has completely spoiled me!), and is a CE-Approved Class A garment.

CE Class A is the lowest level of abrasion resistance, intended for slower-speed urban riding — as opposed to touring (Class AA) and track (Class AAA). But remember, this is an armored shirt, which means you can layer up for even more protection.

I’ve had the Urbane Pro for about three months now, and when I’m on the bike, I love it. In my upright riding position on my FZ, it hardly feels like I’m wearing a base layer at all.

The Urbane Pro shirt shines while riding in fluctuating temperatures. You can layer up for a cool morning commute, then stash your outer layers on the warm ride home.

Overall, the features are pretty minimal — which makes sense, given that it is a base layer. There are two zip pockets on the front, which fit my keys and wallet (the men’s version also has a chest pocket). Thumb loops help make sure the jacket stays up around your wrists where it belongs.

The shirt has two different kinds of mesh fabric. The outer mesh on the back and outer arms is heavier and provides abrasion resistance, while most of the comfort comes from the stretchy, breathable mesh on the inner arms and front torso.

A few notes on comfort and fit

Admittedly, when I first got the shirt I wasn’t sure about the comfort. It felt tight on my forearms, and compared to the other, non-abrasion-resistant armored shirts I’ve worn, which are basically stretchy athletic wear, it felt pretty restrictive.

But after a hundred miles, it has definitely broken in. The softness and flexibility of the Knox Micro-Lock armor helps, too — if the armor was too stiff, this shirt would be unbearably uncomfortable. But with Knox’s lightweight and flexible armor, it’s just right. 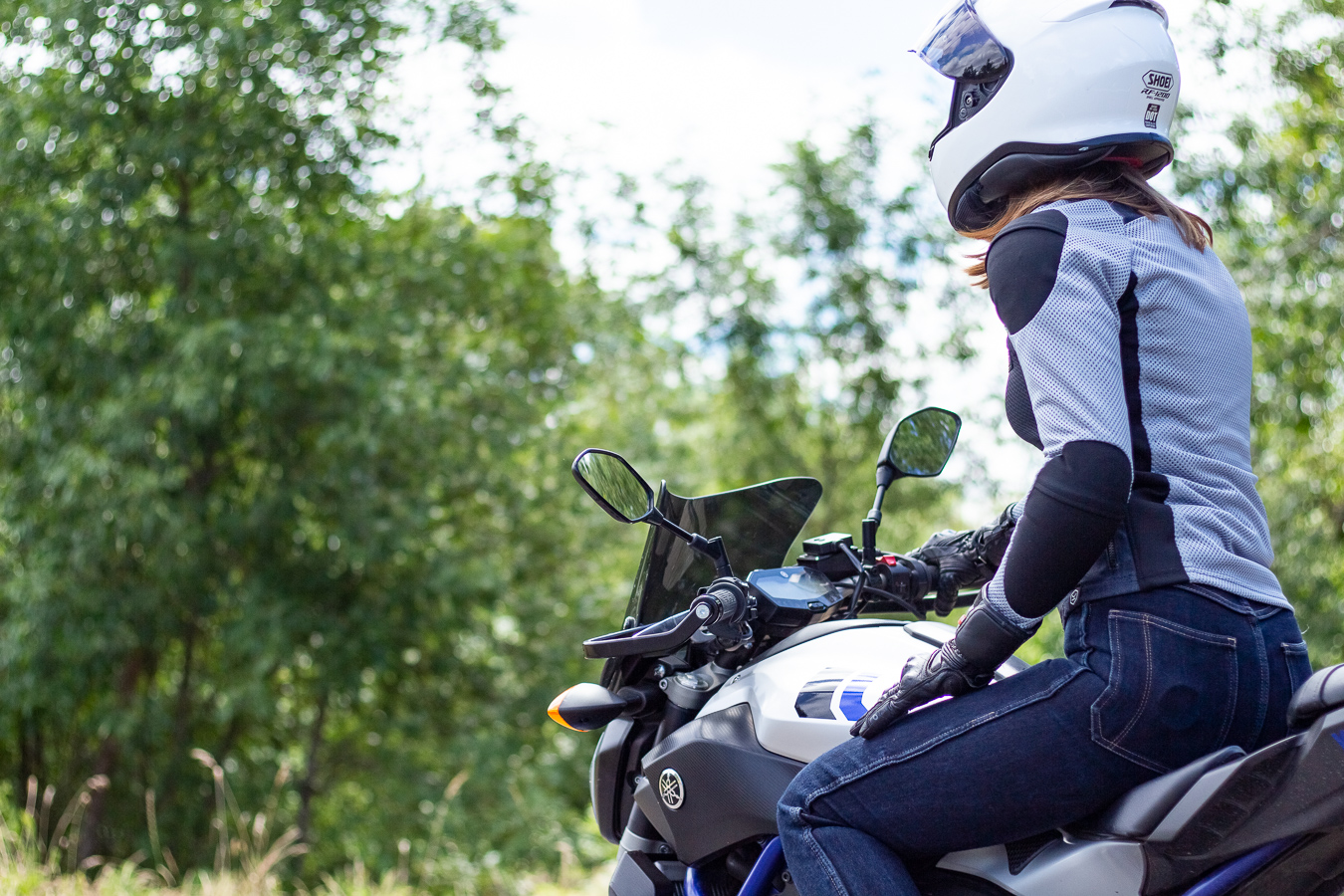 Also, because this shirt is supposed to be form-fitting, but isn’t very stretchy, the fit is somewhat finicky. My forearms are snug, but the bottom of the torso is a bit loose — and if it was too loose, it could ride up in a crash and leave my lower back and stomach unprotected.

Knox planned ahead for this by providing discreet belt loops along the seams inside the jacket, which can be connected via belt to your jeans. For additional protection, I also wear high-waisted Dyneema jeans, (like Knox’s Dakotas, pictured).

The biggest critique I have, though, is the wrist opening. It’s perfect while the shirt is on, but taking it off is a bit of a struggle. I’ve learned to scoot the elbow armor down first to give myself extra wrist room, but it’s still a minor annoyance to have to wiggle my hand out of my shirt while people are watching 😉

The next evolution of armored shirts

I’ve always been impressed by the way Knox balances new, innovative ideas with refining old products. I’m hopeful that now the Urbane shirt is on the market and getting customer feedback, they’ll come out with a more refined version in the future.

But for the first mesh abrasion-resistant armored shirt on the market, it’s really quite awesome. I will likely still wear my stretchy Action armored shirt in the winter, when I don’t need the extra airflow and won’t want to remove any layers, but I know the Urbane Pro will get a lot of wear in the summer and in-between seasons. 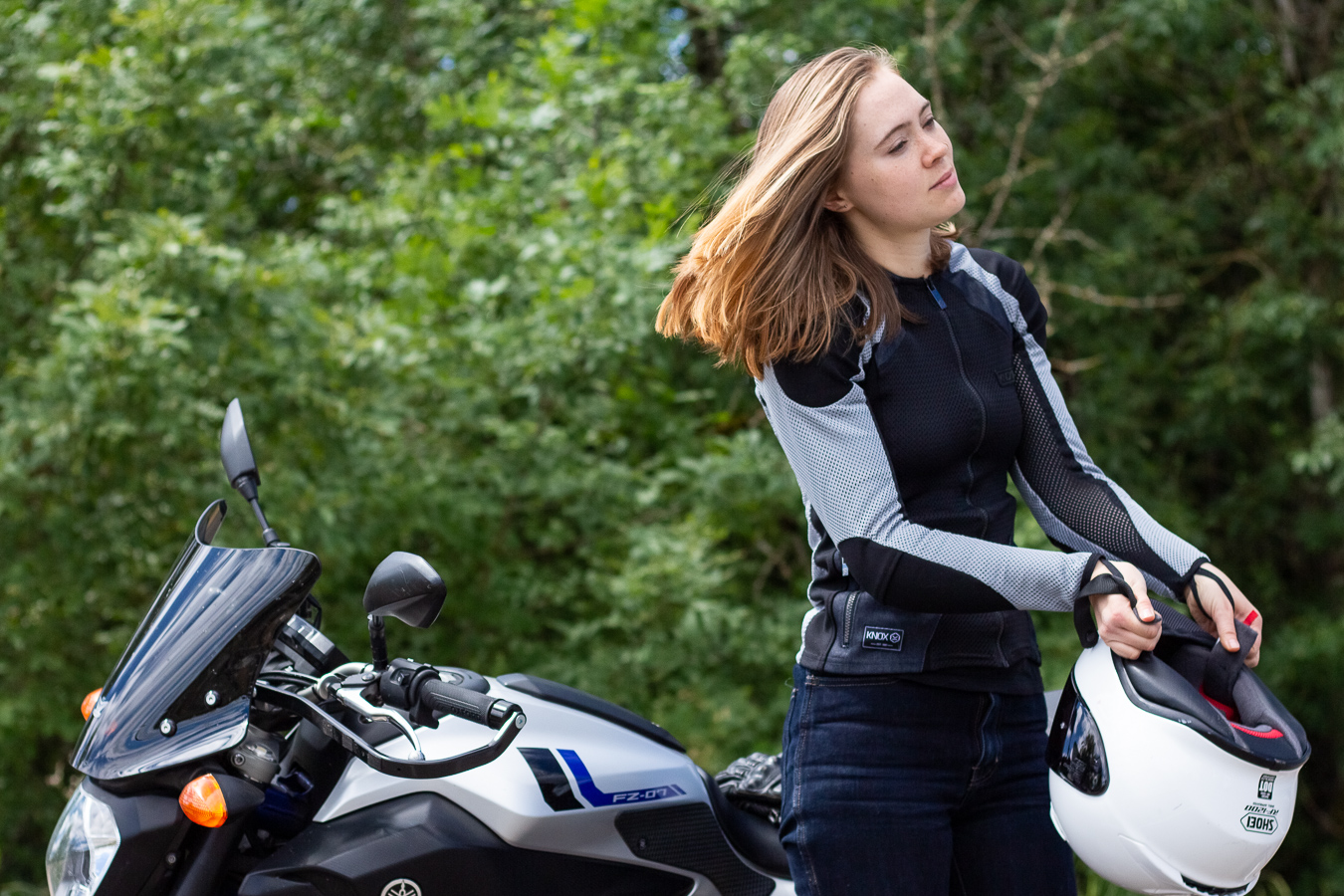 If you’ve been curious about armored shirts but wanted gear with more flexibility, you’ll find a lot to love about the Urbane Pro.

Just remember to be careful with the fit — you want it to be snug enough to keep you covered in a slide, but not so snug it’s uncomfortable. Fortunately, Revzilla offers free returns 😉

Both the men’s and women’s Urbane Pro shirts are available on Revzilla for $260 or from Knox directly, and they come in three color schemes — all black, black/denim, and gray/black/denim.

Overall, I’m very excited to see abrasion-resistant armored shirts on the market. Especially for riders who want more casual motorcycle wear, it just makes sense to have one layer that provides complete protection, so they can wear whatever else they want on top.

It’s a whole new level of gear layering, and I hope it introduces more people to the protection and versatility of a layered gear system.

Note: This review was updated on June 18, 2019 to clarify that the outer mesh itself is abrasion resistant, not the liner, and that the jacket has belt loops that can be used to keep it from riding up.

Disclaimer: I requested an Urbane Pro shirt to try from Knox, which they sent to me with no strings attached. All my opinions are wholeheartedly my own 🙂

Also, links to Revzilla in this article are affiliate links, which means if you click on one of these links and then make a purchase, I may receive a small commission at no extra cost to you. Thank you!