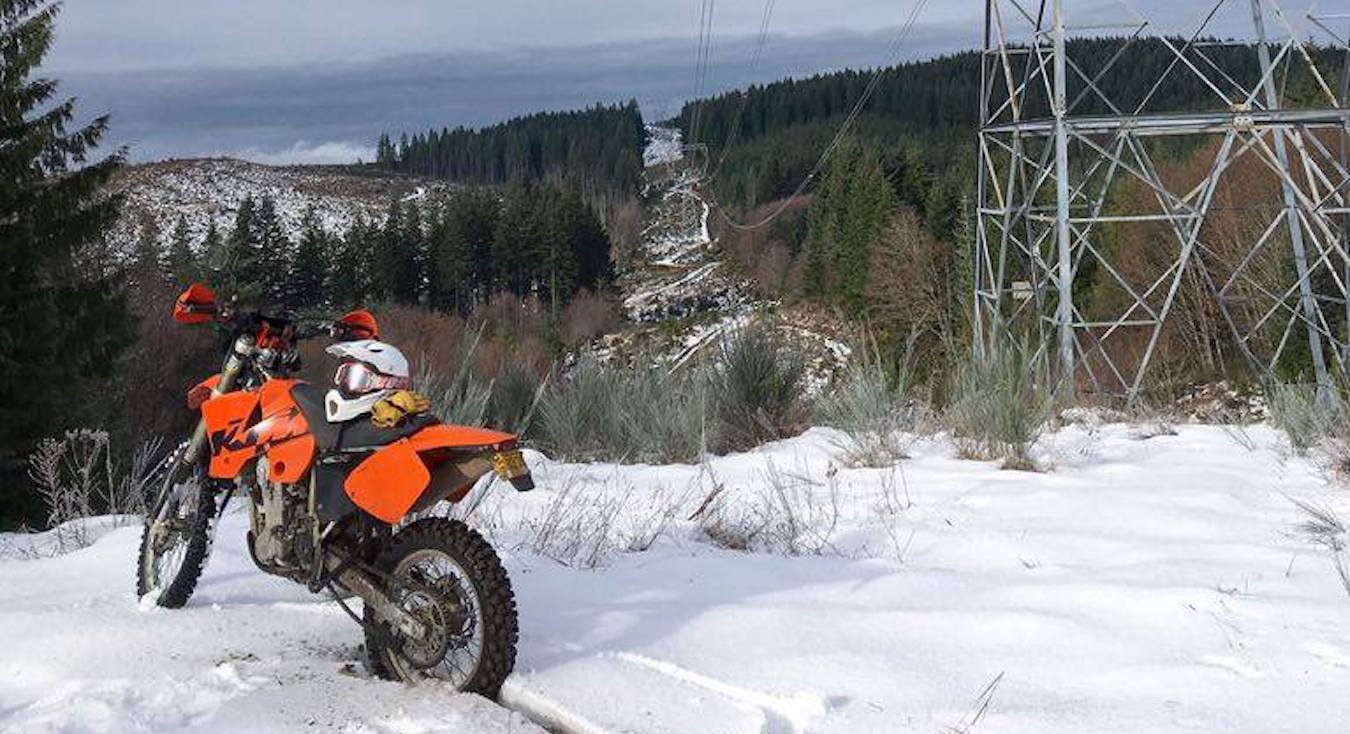 Well, I moved north and it bit me in the ass. No, I’m not talking about the rain ⎯ I knew winter in Portland would be very gray and rainy ⎯  but the snow. Yes, snow. And the ice! This is probably the coldest winter Portland has seen in nearly half a century ⎯ no joke ⎯ and I arrived just in time.

Most of my motorcycle friends (me included) have been pretty bummed about the extreme winter weather, but one person in particular seemed to be having a pretty damned good time…

Sean Smith was one of the first people I met after arriving in Portland, and we bonded over shared KZ ownership. He owns about eight million other bikes (I can’t count), so you can imagine my jealousy when I saw photos of his KTM out and about during the snow and ice storms. Of course, I had to know his secrets, and he was happy to share.

According to Sean, to ride motorcycles all winter, you need three things: Cold-busting, armored gear, a lightweight dual sport bike that can take some damage, and Grip Studs.

Sean said people often say to him, “You must be cold!” But, as he pointed out, nobody ever says that to skiers and snowboarders. “And there lies my first trick,” he said. “You have to have the right gear.”

In my case, the choice is an Aerostich Roadcrafter R3, Combat Light Touring boots treated for waterproofness, gauntlet elkskin ropers lined with merino and fleece, and an Arai Corsair X with Pinloc and ProShade… I’ve [also] got an Aerostich competition silk scarf around my neck to make for a thin, warm seal to keep the cold out.

And that’s just the outer layers.

Under all that I’ve usually got a t-shirt, wool sweater of some sort, and Aerostich TLTech Wind Blocker.  Long johns are usually merino bamboo, socks are almost always wool.

If you’re thinking that all this sounds fairly expensive, you’re right, and Sean acknowledges that. He said a decent alternative for at least one winter ride would be a GoreTex suit, or ski/snowboard gear that you’re willing to throw away, paired with MX armour underneath.

So, if you want to make a habit of riding in the snow and ice, make plans to invest in some serious gear.

The other key ingredient to enjoying wintry weather on a motorcycle is, of course, the motorcycle. But not just any motorcycle.

“If you’re gonna ride on the ice, don’t do it on a big heavy street bike,” said Sean. “You have to be on something you can drop with zero consequences.”

His personal choice is his KTM 450 EXC. “You can bounce it off the ground over and over,” he said, “and it seems the most intense repair you’ll ever have to do is straighten the forks and handguards back out.”

But, he says, “literally any dual sport bike would be great.” And you could have just as much fun with 100ccs as Sean does with his 450. “You don’t need power at all, there’s no grip,” he said. “I can’t even use half the power I have.”

So, the good news is that even though you will have to spend quite a bit on gear, a fun snow machine motorcycle doesn’t have to be crazy expensive.

The Grip Studs (name brand important!) aren’t totally necessary, but without them, Sean said he couldn’t go much faster than 15 mph. “Even by my standards, it was pretty dicey,” he said.

“[With Grip Studs], I can actually ride the bike,” he said. “You can do wheelies on the ice, and when you break the back end free, it feels almost like sand. There’s control. You can still accelerate and carry side grip in a slide.”

Sean admits the Grip Studs are “wildly spendy,” but, in his words, “holy shit do they work!” Not to mention, “you can use them for several seasons, and no one ever said fun was cheap!”

Before you strike out in the ice and snow, Sean highly recommends having some experience on a dirt bike.

Without dirt skills, I couldn’t ride in the snow. You have to have a great sense of balance, stay loose on the bars, and be comfortable with the back end going all over the place. And that’s with studs!

Then, once you get out on the ice, take the time to “test and learn the terrain,” said Sean, “and figure out the special techniques.”

And, be prepared to crash. “My first two corners, I crashed two times,” Sean said. “Sans Aerostitch with all the armor, and a bike I could drop, I’m pretty sure I’d have been injured and the bike fucked up.”

Is it worth it to you?

After listening to Sean explain everything he’s had to do to prepare for riding in the snow, I realized that you’ve gotta really want to to do it. Between the expenses for the gear and studs, the damage you’ll potentially cause your bike, and the skills you’ll have to learn, ice riding is not for the faint of heart.

However, Sean does a pretty good job of selling the experience, too.

I like riding in the snow and ice because it’s as close as I’ve ever felt to racing on a public road. I’m power-sliding through the S-turns on Burnside just east of Caesar Chavez, passing anything in front of me, ignoring the rules of the road and going for the best line.

If you ride like that in the dry, police will come after you. In the ice, I honestly think it’s the safest way to do it. Stay away from the cars, use your strengths to your advantage.

He also said that he really feels that riding in the snow and ice is helping him improve his riding skills overall. “To be a well rounded rider, I think you need to ride all the time,” he said.

Eventually, Sean said, he would like to get to the point where he can compete seriously, and riding in all sorts of conditions is one way he’s working to get there. But he admits, “It’s not for everyone… or even for a lot of people.”

So, if by the end of this, you’re still dying to ride your motorcycle in the ice, start preparing now! Ride a dirt bike in the summer, start to accumulate your cold weather gear, find a good deal on a lightweight dual sport…

And then, next year, when the weather starts to turn cold, you’ll be one of the few riders who will be actually looking forward to the first real freeze 😉

Many thanks to Sean for his time and advice! When Sean isn’t sliding all over iced-over roadways on his KTM, he’s slinging moto-stuff at See See Motorcycles and wrenching at Bridge City Cycles. You can follow him on Instagram @seanslides.

Keep on leveling up your skills with some badass low-speed police maneuvers at the Northwest Motorcycle School’s Ride Like A Cop class. 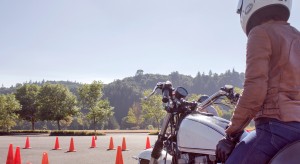 A Day at the Northwest Motorcycle School