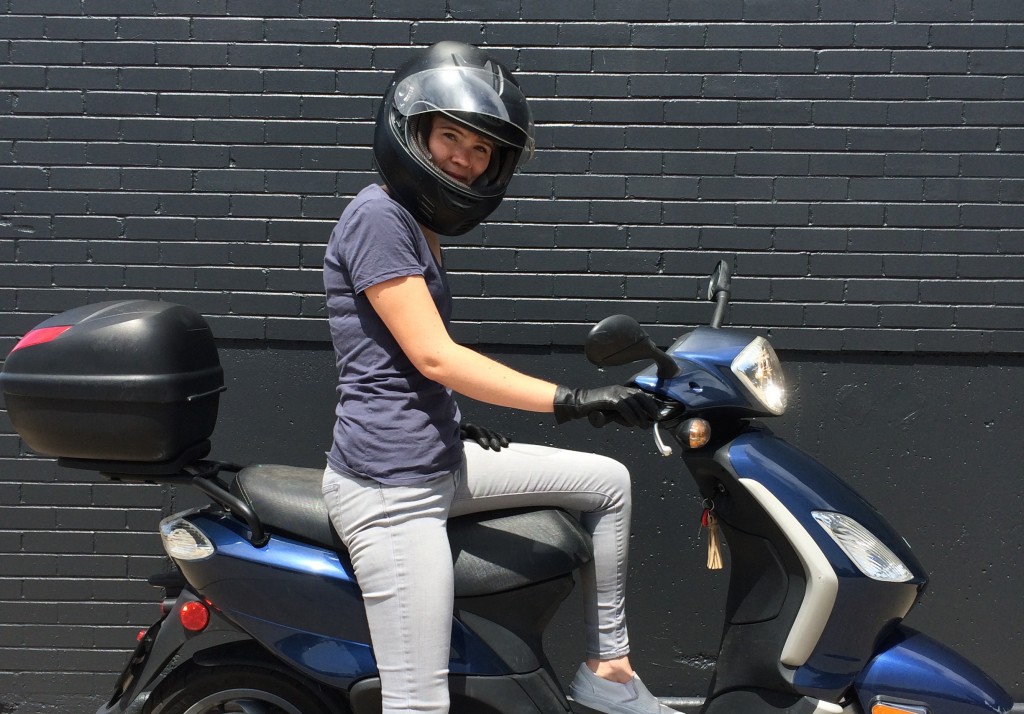 Hello again! This is second part in my “How I Learned to Ride” series. Here’s links to the introduction and part one.

After we both got our motorcycle licenses in November 2014, my boyfriend J bought a very pretty Royal Enfield G5 Bullet, and he was determined to ride all winter (despite the cold!). So I bought my very first pair of long johns (I live in Texas, remember?), and froze my ass off right along with him.

J encouraged me to try riding the Bullet on my own, but I was absolutely terrified of hurting his bike. One of the handful times I did try, I dropped it and gave it a tidy little nick on its tank decal. Which, of course, just scared me even more.

I wanted to ride on my own, but I was nervous. Nervous about learning to ride my own bike; nervous about buying a bike that I liked and then damaging it.

Now, I realize that I didn’t have a very good reason not to get one, I was just scared. Maybe the problem was that I couldn’t picture it. I had a hard time reconciling my image of myself with the image of a motorcycle rider. I didn’t know many (okay, any) women who rode. But despite that, there was a small, insistent part of me that wanted to ride on my own — not just behind J, no matter how pretty his Bullet was.

At the time, I was torn between getting a bike “to learn on” and getting a bike I loved. I even went to look at a Honda Rebel 250 someone was selling on Craigslist, from a rider who had also bought it to learn on, but I couldn’t see myself spending $2k on a bike that I would just want to sell again in a few months.

And then, one Saturday in May, J and I rode by the local Vespa shop (which we did quite often) and decided to drop in (which we had never done before). Just to see what they had. That’s how it always starts, isn’t it?

There, surrounded by shiny yellow, blue, red and green Vespas and Stellas and Piaggios, I started to seriously think about a scooter. They were cheaper than a bike, easier to manage, and I still got to cruise around on my own set of wheels.

The salesman must have noticed how easy it would be to push me over the edge, because he asked if I wanted to try one out. I was about to say no, but J intervened: “Why not? You’ve got your license.” So I agreed.

There was a 2014 Piaggio Fly 150 already queued up for a test drive, so that’s what I took. J followed me on his Enfield as I cautiously pulled out of the parking lot and around to the neighborhood behind the store.

After a bit of wobbling, my nerves began to fade. I felt comfortable on the scooter, just like I had during our training course. More than that, I enjoyed it. I knew then and there that if I bought a scooter, I’d ride it everywhere.

So I did. When I went home that afternoon I serendipitously found a 2010 Piaggio Fly 150 for $1,200 on Craigslist, and I bought it the very next day. I rode it 15 miles home, then I rode it everywhere — to work, to run errands, all over Dallas. From that day on, my life changed.

I used to have an hour-long commute in the car, in horrible, stop-and-go traffic, that would leave me completely frustrated and bent out of shape. I even developed a hip problem from the way I sit while driving. I had recently moved closer to my job and cut my commute in half, but my hip still flared up whenever I spent too much time driving.

Riding, however, transformed my daily drive into a peaceful, almost meditative escape. I didn’t mind waiting for lights to change, or letting someone change lanes in front of me. I felt more connected to the other people on the road, and the places I passed. I became used to the different smells of places — like barbecue at 8:45 in the morning when the restaurant on my way to work was firing up its pits.

On my scooter, I felt like I was a part of the world around me.

I happily rode my scooter for an entire year — through the summer, into the fall, and as much of the winter as I could. But something else happened that year: I fell in love with cafe racers.

If you’re familiar at all with Royal Enfields, you know they’re gorgeous. And J was doing all he could to make it look more like a classic cafe bike — dropped handlebars, eliminated fender, and a cafe-style seat. This was the type of bike that would get you envious stares anywhere you went, from people who knew a lot about bikes to people who knew nothing. And pretty much everyone was surprised to learn it was made just three years ago.

However, if you’re familiar with Enfields, you’ll know that they’re made cheaply, and they have frequent mechanical problems. Not to mention, because the bikes are manufactured in India and aren’t very common in the US, it can be really hard to get replacement parts.

This wasn’t a big deal for J when he first got the bike — for the first six months or so he actually enjoyed mending its little mechanical quirks. But after the bike popped its clutch cable twice (twice!), J started to think seriously about getting a better-made, higher-performance motorcycle. After a few months of calling and bartering (apparently very few dealers will even BUY Enfields), he found a dealership that would give him trade-in value for the Enfield toward a 2009 Honda CBR 600RR.

J was ecstatic about the Honda, but I immediately mourned the Enfield. It was such a pretty bike. It wasn’t long before I was prowling Craigslist again.

We’re coming up on the end of my saga, in which I find the bike of my dreams 😀

Thanks for following so far, and remember to
Always,
Ridewell