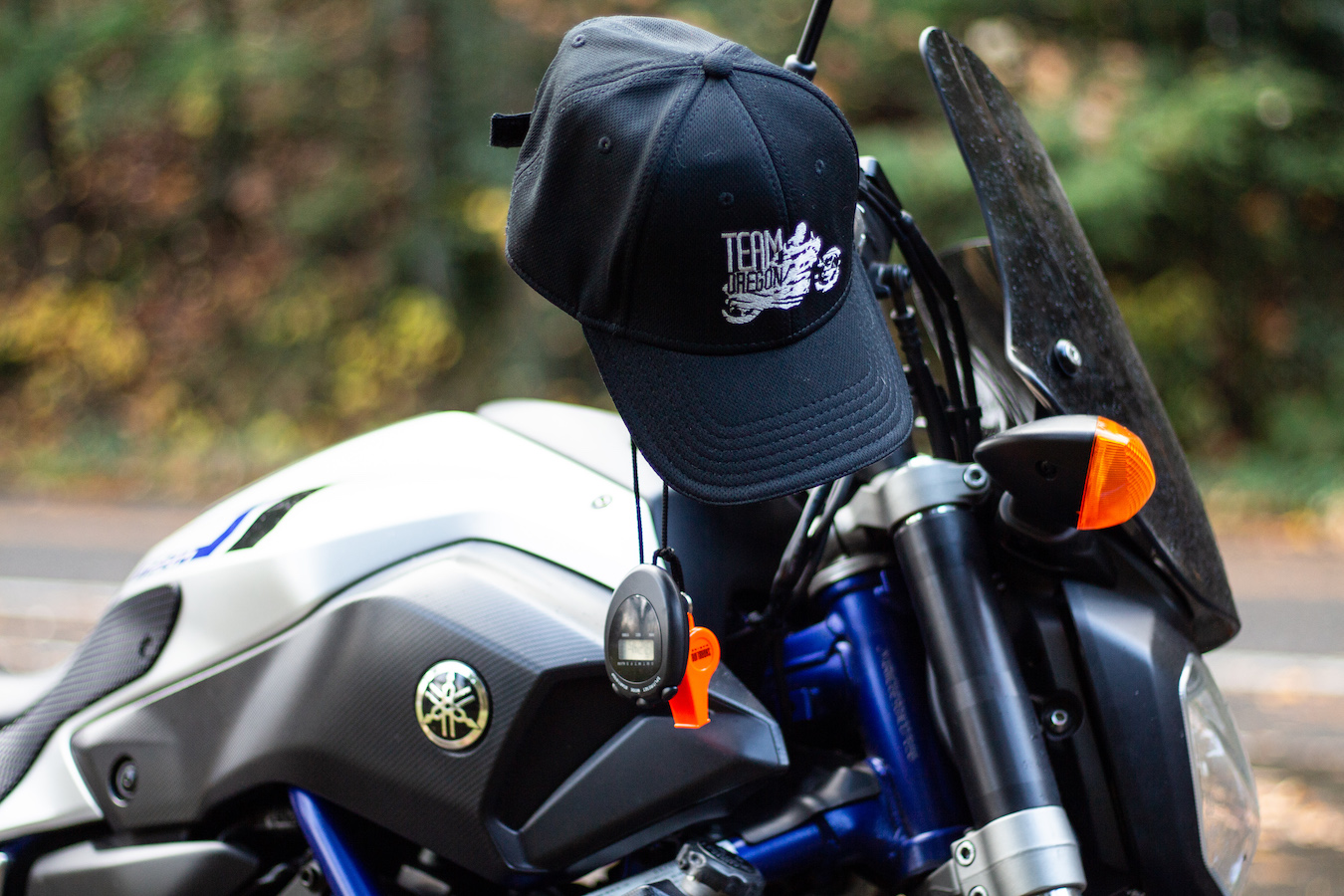 Last year, if you told me I’d be teaching motorcycle classes before the end of 2018, I wouldn’t have believed you. It would have been too much of a dream, too utterly awesome, to be true.

But in August I completed my apprenticeship, and so far I’ve taught four classes as a range instructor with Team Oregon. And while this might sound cliche, I am so proud of myself.

For me, becoming a motorcycle instructor was one of those “oh, that would be cool!” dreams — the kind you always say you want to do, but seems so insurmountable you never start.

In spite of myself, in spite of my fears, I signed up. I took each step of the training process one at a time.

Which brings me to the first lesson I learned, one I seem destined to learn over and over again…

Every journey starts with a single step

My first small action was to sign up, to commit to the process. Then, the goals unfurled before me.

I audited one class, and another. I passed the instructor skills test — which took two tries and a lot of practice, but I did it.

After passing the skills test, I attended the instructor training weekend. Next, I met up with my mentor, and we worked on polishing my demonstration riding.

Finally, I taught two classes as an apprentice, then another two as an intern.

In between these milestones I also put in hours of study, reviewing the exercises, rehearsing what I would say to students, walking through the instructor positions as best I could in my cramped living room.

Listed out like this, it sounds like a lot of hard work. And it was. I poured myself into the range cards, immersed myself in the exercises.

But, it was never overwhelming. I took each step as it came, focusing only on the goal in front of me. And, astoundingly, I finished my whole training that way.

But since joining, I have been impressed by the organization and the people it employs — for many reasons, but one in particular stands out.

The first time one of my mentor instructors asked me if I had any thoughts on how they had done in the class, I was floored. Never before had any teacher or mentor asked me for feedback on a shared task.

Soon I realized this was part of what it meant to be a Team Oregon instructor. Everyone I met, from other new instructors to the director, shared an attitude of humility and continual growth.

It makes sense, though: the Team Oregon instructors are all skilled, dedicated motorcyclists. They know how important it is to be honest with yourself as a rider, and to never stop improving your skills.

It’s a wonderful attitude for riding, for teaching, and for life.

One thing I loved about Team Oregon’s instructor training process was the balance they struck between supporting my training and letting me be responsible for it.

Instructor trainees were always encouraged to ask questions, and we were each assigned a dedicated mentor. But when it came to actually teaching, the mentors always gave me a chance to step up and take charge as much as I wanted.

As a product of the “No Child Left Behind” era, it was invigorating. I felt trusted and supported, not spoon-fed. For me, it was the perfect balance of independence and instruction.

The Team Oregon range curriculum is structured in a similar way. As instructors, our goal is to keep students’ “wheels in motion,” and give as few verbal commands as possible. The idea is that students will learn more by riding than from listening to instructors talk.

As a product of this learn-by-doing, constructive teaching philosophy, I can only say that it worked for me. I still have a long way to go to perfect the technique, but I’ve got some great mentors.

Learning to ride a motorcycle is counterintuitive

I may not be as experienced as some of the other instructors, but I’m a long way from my new rider days. And interacting with beginners this past year has reminded me of how counterintuitive it is to learn to ride a motorcycle.

Take, for example, the simple fact that on a motorcycle, going faster makes you more stable.

On two legs, that’s ridiculous: bipedal creatures find stability in stillness. But you won’t last long on two wheels if you can’t internalize this important rule.

Learning to ride a motorcycle is full of those kinds of counterintuitive leaps. And it’s been interesting to watch beginners again, now that I have five years’ riding experience.

Trying to coax a cautious, shaky, new rider to go only a couple miles an hour faster isn’t easy. But when the student finally takes that counterintuitive leap, it’s incredible to see them “get it.”

I had one of my own “lightbulb” moments while working with my mentor, Stacey, on my demonstration riding. I struggled with the slow-speed 90-degree cornering exercise; I could make the turn, but it wasn’t very clean.

I knew I needed to turn my head to look through the turn, but Stacey kept telling me to look farther, look more.

It took a few tries, but finally I trusted Stacey and went all in. I turned my head farther than I thought I needed to, so far it was a little bit scary. And it worked.

That one insight not only fixed that exercise, but all my slow-speed turns are tighter and smoother now. And I’m grateful to have experienced that small moment of fear, trust, and success, to help remind me what it’s like to be a student.

Also: I can move motorcycles now!

When I told J I was going to sign up to teach for Team Oregon, his first reaction was a joke: “You know, you’re going to have to finally learn to move motorcycles.”

He was teasing, but he was right. When I got The Little Rat, I was so terrified of dropping it that I would only move it while sitting on it. I only got a little better after getting the XL and the FZ.

Eight classes in, I’m happy to report that I’m much more comfortable moving motorcycles now! It’s a silly thing, and a little embarrassing to admit how long it took, but it’s such a relief.

If you’re not yet comfortable moving your motorcycle, check out this video from Killswitch Queen. I wish I had seen a video like that when I first started riding 😉

It’s only the beginning…

This year, I became qualified to teach range classes with Team Oregon. It seems like the end of a journey, but of course it’s only the beginning.

I still have so much to learn, as a rider and an instructor. I’m grateful that I get to learn those new skills as part of such an excellent organization and community, and help new riders along the way.

But also, I’m so glad that I had the courage to take a chance on myself and sign up for something new.

Once again, motorcycles have helped me find the strength to set aside my fears and become the kind of person I’m proud to be.

Disclaimer: I might be an instructor now, but on this blog I am not a Team Oregon spokesperson. My thoughts and opinions are 100% my own.

If you’re also a rider in Oregon, did you know Team Oregon offers advanced classes? Head over to the Team Oregon website to learn more.